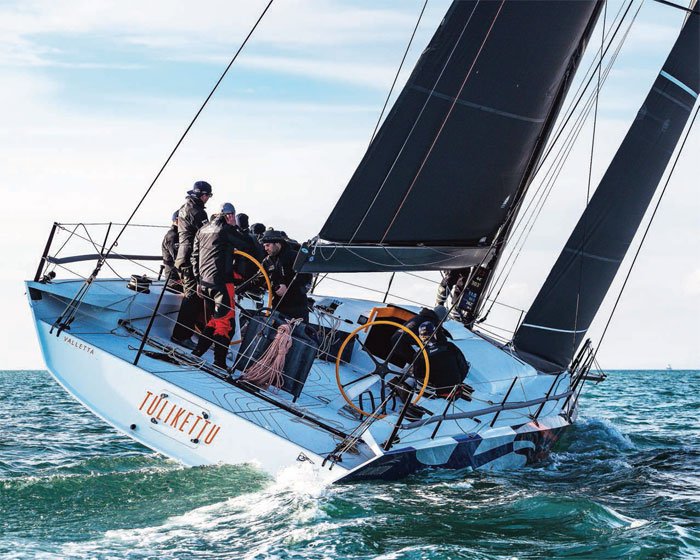 Stu Bannatyne worked up the following article for Seahorse Magazine on his experience of sailing the boat, but of course with recent events we just want to add an introductory note on the owner’s feedback subsequent to the boat hitting a very solid object in the ocean…

”We managed to sail almost 5000 nautical miles aboard our magnificent yacht, which was long enough time to conclude that the new Infiniti 52 exceeded all our expectations for the performance of the boat. I will never forget the feeling when Tulikettu leaned on its foil and lifted herself above the waves for the first time reaching effortlessly boat speeds of 28 knots without help from surf waves, and the wind speed didn’t come even close to our boat speed back then.”

Meanwhile, Bannatyne – Tulikettu Racing team’s coach and Doyle Sails representative – said he was ‘in total shock and saddened to hear about the loss of Tulikettu’.

‘The few times I sailed on the boat during early sea trials were truly exciting and she gave more than a few glimpses of her very impressive performance through a range of conditions,’ Bannatyne said. ‘An absolute pleasure to drive and trim, Tulikettu was I think a genuine step forward in technology and performance for an offshore 52 foot race boat. I understand that Arto is very keen to be able to get back into a new Infiniti 52 as soon as possible. This is great news and completely understandable! I look forward to the opportunity to join him once again.”

It had been a long time coming but the first session of sailing the new Infiniti 52 Tulikettu resulted in a very productive and promising few days. It was in late January from Gosport, on the south coast of the UK, where the boat could be put through the commissioning and sea trials phase of the programme. Stu Bannatyne was on board.

We were extremely fortunate with the weather. Clear skies and a range in windspeeds from zero to 30kts meant we could see all the sail combinations in range and were able to test the DSS foil and other systems extensively under realistic sailing conditions.

The first day we used just the furling J4 and full mainsail to check systems, rig tune and DSS operation. All went well and gave us the confidence on day two to spend considerably more time on the water and go through a bigger range of sailing load cases with more of the inventory. The full size, structured luff J2 headsail fitted perfectly and the Diverse hydraulics powerpack worked faultlessly to enable very accurate positioning of the rams controlling the jib tack and lead. It was becoming apparent that the thought processes behind the deck layout and choice of systems were working very well and the ability of the trimmers to control and adjust the setup of the mainsail and headsail with the touch of a button or two was very easy. This ease of use will translate directly to performance on the racecourse as the mainsail trimmer can make adjustments to the setup of both sails, utilising the easy access keypad adjacent to the wheel. No one needs to leave the rail, keeping weight outboard and minimal disruption for the helmsman.

Final commissioning of the water ballast system had not yet been completed so it was difficult to ascertain the absolute performance potential when sailing upwind, but early indications suggest the boat is well balanced and easy to shift gears to suit changing wind speeds and sea states. As we cracked off to around 70 degrees TWA, the genoa staysail (which also doubles as the storm jib when rules require) was hoisted and fitted very nicely inside the J2 – itself now sheeted from a deck padeye midway between the coachroof edge and the rail. The ability to efficiently set the genoa staysail inside the J2 at narrow angles was really important to me because the boat balance and sailplan efficiency improves greatly with this setup, so to see it working at apparent wind angles inside 30 degrees certainly justified the extra design effort we put into this area.

Downwind potential
A quick look at the A2 and spinnaker staysail in the fading light confirmed that the Infiniti 52 has the potential for some impressive downwind performance. The beauty of the overall concept means that the boat’s performance at wider angles in lighter air should be very competitive with an easily driven, narrow waterline, lower drag hull. The mast position and long bowsprit mean extra sail area in the form of staysails can efficiently fill the slot, adding the always desired extra drive force for underpowered sailing conditions. When the need for extra righting moment emerges with increasing windspeed, then the DSS foil provides this, enabling the boat to maintain low heel angles for maximum efficiency of the sail plan and appendages. Obviously very early days still, but by with my “seat-of-the-pants” feeling, I could notice the positive effects of the foil kicking in at boat speeds as low as 12kts. This is hugely encouraging in terms of the overall performance potential across the range of conditions.

Day three was definitely the most productive and with a forecast of up to 30kts early and slowly easing, it was perfect to get a lot done. We started the day with a single reef in the main and J3 headsail, cruising out of the channel from our Gosport base. I have to say, I think it caught everyone by surprise when casually sheeting on as we rounded one of the channel markers, the boat, which was just cruising at 12-13kts dramatically accelerated to around 17-18kts and the spray started flying. Just to recap – without a staysail (or two) and overly attentive trimming, the speed jumped around five knots as the foil very quickly contributed significantly to the righting moment. We quickly sheeted on and the boat easily maintained speeds in the mid to high teens as we completed the harbour exit before sheeting on to go upwind. That was a cool moment and confirmed that the boat will have some very fast reaching numbers when everything is dialled in.

Dynamic stability
A long upwind leg followed, changing down through the reefs and ultimately using the genoa staysail in storm jib mode to complete the delivery of Tulikettu up towards Yarmouth. We saw gusts to 30kts and with some trepidation were contemplating the most appropriate sail plan to use for the downwind leg. However, as forecast, the breeze moderated and it was an easy decision to go with the A4 and full mainsail for the return journey. We set ourselves up with a long port gybe to start with and took the necessary time to safely set up the DSS and get everyone in position. The breeze by now was around 18-20kts and the boat responded very well. Once settled we were able to comfortably average close to wind speed with a few short bursts into the low 20s, and a top speed of around 24kts. Really encouraging was how stable and easy to steer the boat was. The foil behaved exactly as predicted, trimming the bow up and adding significant righting moment. We almost felt underpowered at times, but secure in the knowledge we have more sail area to add when fully triple heading, this was not a concern. The powered winches gave us the confidence to work the sheets aggressively without anyone leaving the rail. This will be a huge performance boost when racing offshore with reduced crew numbers.

The A4 sailing was over pretty quickly as we still wanted to check in with the masthead zero (MHO) before getting back to Gosport so we dropped the chute just off Cowes and set up the MHO for the remainder of the downwind. By now the breeze was dropping further and we were able to play around with some different angles and modes. The concept of this MHO is a little different to traditional sails for this size of boat in that it is a fairly large and flat sail – a concept normally reserved for much bigger, faster boats. With the DSS fully engaged and doing its thing, it was time for Arto (Tulikettu’s owner) to take the helm. Fair to say he was a little nervous at first. Very quickly though, the tense grimace turned into a wide smile as he easily relaxed into a smooth driving style and found the boat responsive but not too twitchy. His comments later about how much easier it was than he expected should be very encouraging for all prospective owners thinking about the Infiniti 52 as their next offshore racing platform.

The final day had a very light forecast and so it proved. A great opportunity to check out the light air sails so we switched to the one reef main and J1. A very quick upwind before switching to the MHO for a light air evaluation. The boat powered up very quickly and it is easy to see how this sail will be the only one we need between about 70° and 140° TWA when the wind speed is below 6kts. The ability to sheet inboard and inhaul the clew at tight angles enables some very tight sailing angles to be achieved and then at the wider angles, the big, flat MHO performs very well at keeping the boat powered up when looking to sail deep. As the breeze died away to nothing, we hoisted the spinnaker staysail as a wind seeker – just to check sheeting and confirm the ability of this sail to get the boat moving in those “flopping” conditions. All checked out and it was a very happy team that then motored back to the dock for a late lunch.

It was a hugely productive few days and although only at the very beginning of the development programme, we have seen some very encouraging signs of performance and behaviour to confirm the immense potential of this platform. The boat balances well, the DSS foil contributes as planned and the Doyle Sails inventory developed for this boat specifically performed as expected. Early days and the learning curve will be close to vertical for a few months yet but keep an eye out for Tulikettu on the racecourse soon.