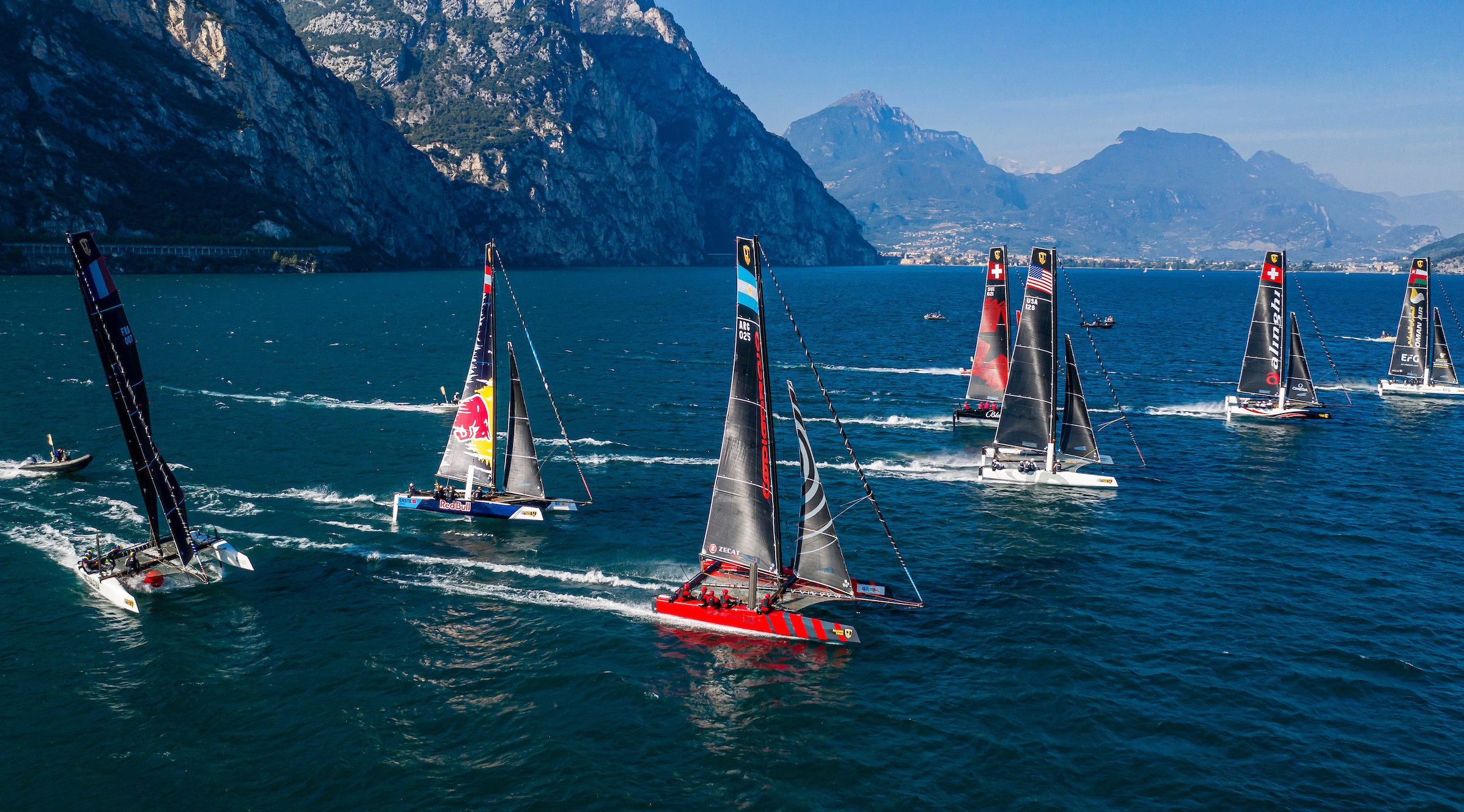 After considerable effort went into laying on a successful series in 2021 despite the pandemic, the new GC32 Racing Tour season will see the show fully back on the road, normal service resumed. The five venues for 2022, the GC32 Racing Tour’s ninth season, will include several of the best in Europe for foiling catamaran competition, including a must-attend World Championship.

The GC32 Racing Tour remains the sole racing circuit for competition between the GC32 foiling catamarans, designed by Dr Martin Fischer, now Chief Designer for the British INEOS Britannia America’s Cup Challenger. With strong competition between pro teams, including several also competing in SailGP, and private owner-drivers, who have their own ranking and prizes, the circuit represents the most cost effective way into foil-born yachting. The five man GC32 is also the most accessible way, being a one design, fitted with ‘standard’ soft sail rig and no complex hydraulics while still being capable of blistering speeds approaching 40 knots.

After the last two events were disappointingly cancelled there, it is with great anticipation that the GC32 teams return to one of their favourite venues: Riva del Garda, renowned for its flat water, big winds and its dramatic backdrop with the Dolomite mountains encircling it on three sides. On one side of the race track is a giant sheer cliff, the location of the famous car chase that opens the James Bond film Quantum of Solace.

The GC32 Racing Tour has scheduled visits to Lake Garda annually since 2016. Italy’s most famous lake for racing sailors has since become the foundation of the GC32 Racing Tour, annually holding its opening event there. This position was galvanised when the town in Trentino, at the very northernmost tip of Lake Garda, was chosen as the venue for the first GC32 World Championship in 2018.

As always it will be hosted once more by the Fraglia Vela Riva whose President Alfredo Vivaldelli commented: “I am very pleased that after the two years marked by the COVID the GC32 class will return to our club and I hope that, as usual, it will attract many fans thanks to the spectacule and speed inherent in the class.”

From Italy, the GC32 Racing Tour migrates to Portugal’s Algarve, where it has a similarly long, fruitful relationship with the town of Lagos. From an Italian lake, the flying catamarans transfer to the Atlantic Ocean, albeit protected from the waves by Cape St Vincent, the southwesternmost tip of Europe just 10km away. This permits strong sea breeze conditions but flat water – perfect for foiling.

It was in Lagos in June last year that the flying catamaran circuit resumed after 18 months of events cancelled due to the pandemic. To minimise travel, two consecutive events were held there, a formula welcomed by the teams and the local Portugese hosts, so this will be repeated again in 2022 with the generous support from the City of Lagos, Marina de Lagos and Sopromar and other supporting partners.

The second event of the 2022 GC32 Racing Tour will take place in Lagos over 22-26th June, followed by the third over 13-17th July. This latter is significant as it will be the fourth edition of the GC32 World Championship, after the GC32 was officially recognised by World Sailing in 2017. The GC32 remains the only foiling catamaran ‘yacht’ officially permitted to hold World Championships.

Mayor of Lagos, Hugo Pereira welcomed the teams: “The continued choice of our territory, especially of our attractive bay, for such a prestigious event as the GC32 Racing Tour, and this year, additionally of the World Championship, makes us more and more proud and motivated to continue working to support sports of excellence, to improve the needed space and technical settings, and to promote our unique and fantastic ‘ecosystem’ internationally.

“The sea has been, from our early history, the epitome and unavoidable in the definition of Lagos as a territory of excellence, so, despite the constraints of the COVID-19 pandemic, it is with renewed enthusiasm that we express all our support and recognition of this event that brings the best to Lagos and, at the same time, shows Lagos to the World, from a unique and eloquent perspective.

“Another incomparable year…with the usual charm! Lagos awaits you!”

The final two events on the 2022 GC32 Racing Tour will take place over 14-18 September and 19-23 October in venues to be announced shortly.

Christian Scherrer, manager of the GC32 Racing Tour commented: “I’m very much looking forward to getting back to a full five event GC32 Racing Tour season. To kick off the circuit again back on Lake Garda with our classic GC32 Riva Cup season opener is a great start. Another GC32 top spot follows in June in Lagos Portugal with first the GC32 Lagos Cup and then the GC32 World Championship. We are grateful for the local support and looking forward to exciting World Championship with a strong fleet of 10+ GC32s.”