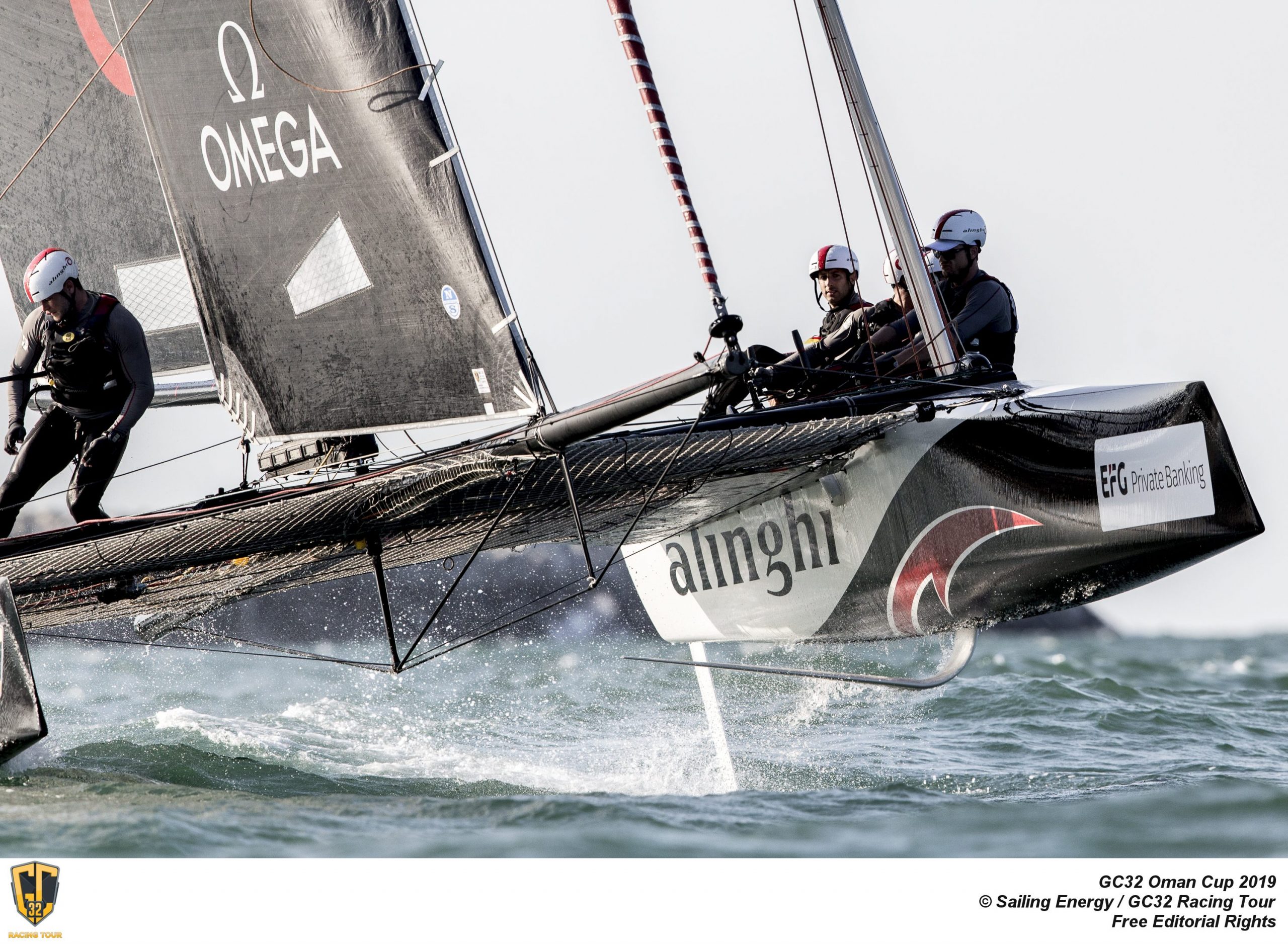 The big players are set to return to the battlefield in one month’s time when high speed foiling catamaran competition gets underway at the GC32 Oman Cup, first of five events comprising the 2020 GC32 Racing Tour.

Throughout the 2019 GC32 Racing Tour two teams were at each other’s throats. The Adam Minoprio-skippered Oman Air won the first and third events of the season while Ernesto Bertarelli’s Alinghi team claimed the second and fourth, including the coveted GC32 World Championship title in Lagos, Portugal. This left these teams neck and neck going into the final event in Oman in early November. Here ultimately the Swiss prevailed, adding the 2019 GC32 Racing Tour title to their impressive collection of silverware for the year.

These two teams will get a chance for a rematch this season. The immaculate Alinghi returns with the same line-up as it did in 2019 with Arnaud Psarofaghis sharing helming duties with Bertarelli. “Why would you change a winning team?” explains Alinghi Team Director Pierre-Yves Jorand. “We are working very nicely together and performing well and delivering a great performance.” Also on board will be Nicolas Charbonnier, Bryan Mettraux, Yves Detrey and Timothé Lapauw.

Alinghi’s objectives for the season are of course to defend their overall GC32 Racing Tour and World Championship titles, but Jorand points out that this year the game is slightly different due to the World Championship taking place later in the season (in Villasimius, Sardinia over 16-20 September). “On the one hand it will be good because we can show up well practiced and can have some good racing. On the other hand we will have to look after our sails and the gear because the GC32 rule doesn’t allow you to build extra sails specifically for the World Championship.”

The local team will be backed by GC32 Oman Cup event hosts Oman Sail and EFG Private Bank Monaco. Talented New Zealand round the world sailor and former Match Racing World Champion Adam Minoprio will once again helm the Omani GC32 team and will be supported by Peter Greenhalgh on main sheet. “We will be there and we will gain momentum as the year goes on,” predicts Greenhalgh of their prospects.

Omani sailing star Nasser Al Mashari will also make his return this season but will be joined by two new faces, GC32 experienced hands Ed Powys and James Wierzbowski, who are set to make their debuts for the Omani team in Muscat. “We know Ed and James well and believe that they will bring a new energy to the team,” says Greenhalgh. “We have had to give up some crew weight with the new inclusions, but are confident it won’t impact our performance and we can make a strong start to the season.”

Austrian catamaran sailing stars and double Olympic Tornado gold medallists, Roman Hagara and Hans-Peter Steinacher, return to the GC32 Racing Tour looking to build on their third placed finish in 2019 with Red Bull Sailing Team. To help them achieve this they, like Alinghi, are sticking with the same crew as they sailed with in 2019: the international line-up of Swede Julius Hallstrom and Australians Mark Spearman and Rhys Mara.

“We learned a lot in 2019 and grew as a team,” observes Hagara of their prospects for 2020. “That means our team work and manoeuvres on the GC32 run both fast and very smoothly now. I think we will be able to fight with Alinghi and the Oman team this season.”

The Austrian team joins the GC32 Racing Tour in 2020 also bearing the corporate colours of the investment and real estate powerhouse CC Real, which is coming on board with Red Bull Sailing Team as their official partner for this season. “The partnership between this dynamic international company and the equally performance-driven sailing team – led by two-time Olympic Champions Roman Hagara and Hans Peter Steinacher – creates a synergy that will raise the global profile of both entities. The ultimate goal: to produce Red Bull Sailing’s first GC32 Racing Tour victory,” says Red Bull Sailing Team’s Mario Schoby.

On the race course off Muscat’s Al Mouj Marina over 25-29 March, they will be joined by Erik Maris’ Zoulou. The French team ended the 2019 season on a high on these waters last November, when they finished second to Alinghi. Also in the fight will be American Jason Carroll’s Argo, now the longest serving team on the GC32 Racing Tour and Christian Zuerrer’s Black Star Sailing Team, the Tour’s newest team, which is currently busy training in Oman ready for the new season with Chris Steele on helming duty.

Christian Scherrer, manager of the GC32 Racing Tour looked forward to the growing line-up for the new season: “It seems that we are in for another season of strong competition across the GC32 fleet when we start racing again in Oman next month. More teams are set to join the 2020 GC32 Racing Tour when it returns to Europe for the GC32 Riva Cup at the end of May.”