Skip to content
You are here
Home > Inshore Racing > GC32 Racing Tour: Neck and neck ahead of Oman season finale 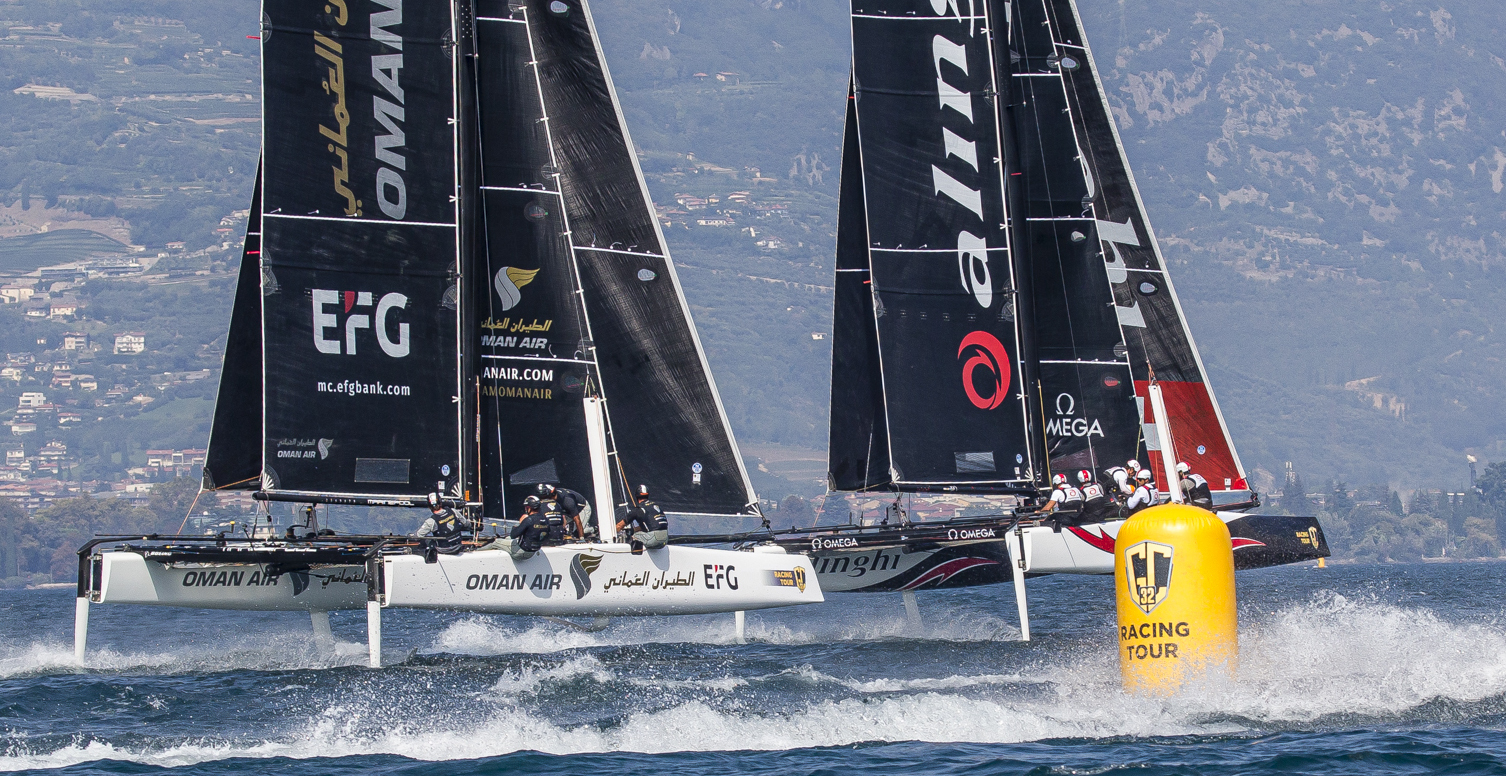 After 73 races across four events in three countries the standings could not be closer going into the next week’s 2019 GC32 Racing Tour’s finale in Oman.

Ernesto Bertarelli’s GC32 World Champions Alinghi team and Oman Air, skippered by New Zealander Adam Minoprio, have been at each other’s throats for the entire season and with two event wins and two seconds apiece. They are tied at the top of the leaderboard going into the final event. Technically Alinghi is first, but only through having won last month’s event in Riva del Garda. Even at that event the two teams finished tied, Alinghi winning through having won the final race.

When the high performance flying one design catamarans race out of Muscat’s Al Mouj Marina, over 5-9 November, the Oman Air crew will enjoy a home team advantage, having been racing on these waters for a decade, initially with the Extreme Sailing Series. However that was before Minoprio joined, although the New Zealander has competed here previously.

“It is going to be a fun final event in the hometown of our team,” states Minoprio. “Of course we want to win the single event, but at the same time we want to keep an eye on Alinghi. We might just have to race them a bit to ensure we win the series. We are going to be neck and neck and it would be nice if it were a match race, but there are other boats there too and we don’t want to finish at the back. We want to make sure we are on the podium, ahead of Alinghi.”

With Minoprio and Peter Greenhalgh is Omani crew Nasser Al Mashari, who today is one of the longest serving crew having started sailing on board the Extreme 40s a decade ago.

Al Mashari says: “It is special, having the last event in Oman and it is still tight in the overall series with Alinghi, the strongest team in the fleet. So I am really excited and proud to be where we are. We hope to win, but Alinghi is a very strong challenger.”

Having represented Oman at such a high level for so long, Al Mashari is something of a local legend in his country. “Our family and friends and our colleagues at Oman Sail will be there, so we will have a lot of support from them. We’ll have the Oman flag up there…”

If Oman Air has spent the most time sailing in their country, Alinghi is close behind. “We love Oman – we spent quite a bit of time there, racing but also winter training,” says Team Director Pierre-Yves Jorand. “It is a great venue but we have never sailed there in November. I’m sure there’ll be an open course, sea breeze and some chop sometimes – we will be ready whatever the conditions. We can be sure it will be a super tight fight between the teams.”

Looking in good shape to claim the GC32 Racing Tour’s owner-driver championship for 2019 is Erik Maris’ Zoulou team that leads Jason Carroll’s Argo, having won the owner-driver trophy at all the events this year save for the GC32 World Championship in Lagos, Portugal. But as much as this, the French team is hungry to relieve Roman Hagara and Hans Peter Steinacher’s Red Bull Sailing Team of the bottom step of the podium. They are currently just four points astern of the Austrians Olympic Tornado legends.

Hagara is hoping to make further gains for his team. “We are definitely looking forward to Oman. We have scored a few second and third places there, so we know it quite well! We have made a lot of improvements through the season and have shown in a few races that they [Alinghi and Oman Air] are beatable. We just have to minimise our mistakes – we are just missing a little bit, but we are closing.”

Also looking to up their game for this final event of the season will be Christian Zuerrer’s Black Star Sailing Team from Switzerland, to be steered in Oman by New Zealand’s Chris Steele, which has been slowly improving over the course of its first season on the GC32 Racing Tour.

If conditions off Muscat in November are an unknown, the person who should know most about it is full time resident Oman Air’s Nasser Al Mashari. “November conditions are really good – 24-25°C, so not to hot and not too cold,” he says. “And we’ll see about the breeze. For us, we are ready for any conditions.”

In fact the long range forecast looks excellent with 10-18 knot northeasterlies forecast for every day.