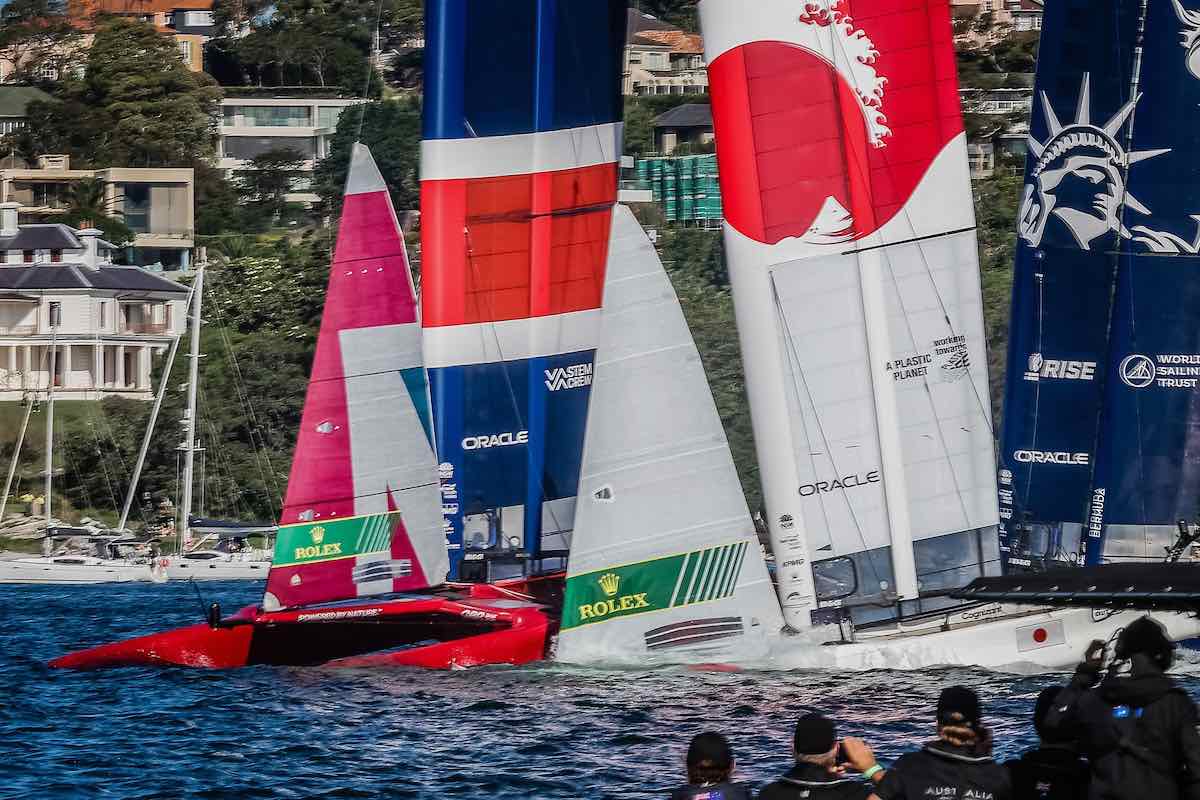 Under perfect Sydney skies it was anything but a perfect day of racing for Great Britain and Japan as a major crash happened moments before the start of race three, turning the Australia Sail Grand Prix presented by KPMG, and the season on its head.

The crash occurred just minutes after Japan had seemingly taken command of the Sydney event with a win in race two, and it left Ainslie and his team ruled out of the rest of the event and with their chances of qualifying for the Season 2 Grand Final in San Francisco in tatters. All crew members on both boats were safe and unharmed after the incident and all debris was collected out of the water.

In the wash up of the day the podium action belonged to the Spain SailGP Team as driver Phil Robertson led them to three top three finishes to sit atop the event leaderboard after three races. Racing on home waters, Australian Tom Slingsby had a mixed day of results with a win in a chaotic race three, a third place in race one and a disappointing seventh place in race two. His team sits in equal second with Jimmy Spithill’s U.S. team after day one, five points behind Spain.

But all the talk after the day’s racing was about the crash between Ainslie and Outteridge with the Great Britain driver apologetic and rueful about how the day had gone.

Ainslie said: “I honestly just didn’t see the Japan team at all, I was focused on the USA boat and the first time I was aware of Japan was just as we hit them, it’s really frustrating, but I guess racing at this level, this tight, with the teams as close as they are, it’s going to happen.

“Really your overriding concern is just people’s safety as it was a heavy impact. I feel really sorry for the Japanese team, no one wants those situations to happen.”

For his part Outteridge said he was stunned to see the Great Britain boat heading towards him and his primary concern had been the safety of his crew.

Outteridge said: “I honestly just thought how can that happen? No one ever intentionally does that, so it has to be that they didn’t see us. I think they all feel terrible, no one wants to do that to other boats, the good news is everyone’s ok. I think that it shows the fleet is pushing hard, everyone’s pushing hard.

“Unfortunately for us it’s ruined our boat and ruined our chances of winning this event.”

For Ainslie, the consequences of the crash would appear to extend far beyond the Sydney event, with his team certain to miss tomorrow’s racing for causing damage to the Japan boat. The Chief Umpire has determined Great Britain will also incur a six-point penalty for the incident in the Sydney event and lose two points from its overall season standings.

Ainslie said: “Sadly it’s the end of our season now really in terms of making it to the final race in San Francisco. It will be impossible for us to make it, I expect, and obviously it also massively affects the Japan team and their season which is not what we want to do, we don’t want to affect teams in that way, it’s massively unfortunate for everyone.”

Under the SailGP rules, the SailGP Event Authority can substitute or allocate like for like equipment to enable a team with damage to race.

The Event Authority is currently assessing the damage to the Great Britain boat to ascertain if it is possible to substitute some of the British equipment to allow Japan to race. Ainslie and the Great Britain SailGP Team have offered any support they need – including their boat – to help get Japan back on the water for tomorrow’s racing.

Outteridge wasn’t giving up hope of racing in day two and hoped his team could fight for valuable points to shore up their place in the championship standings.

“Ben said if there is anything he can do to get us racing tomorrow he will help, and I appreciate that. Our goal here in Sydney was to maintain that buffer in the championship standings but Ben’s just made that a little bit harder for us. It’s going to be one of those weekends where it could have been so different but it is what it is.”

Spain meanwhile can head into day two optimistic of a first SailGP event title, and rising further up the championship standings.

Robertson said: “Racing’s pretty close, there’s a lot of pressure there and everyone wants to be making that final in San Francisco so boats are going to crash and they’re probably going to keep crashing, so we’ll keep doing what we are doing and maybe we can sneak our way into the Grand Final in San Francisco.

“I’m hoping the team come full focus tomorrow. It’s going to be windy and we need to be looking at this event, these races and not next season or anywhere else.”

Also sure to feature heavily in tomorrow’s action is Spithill’s U.S. team who overcame a slow start with sixth place in race one to finish on the podium in the second two races of the day.