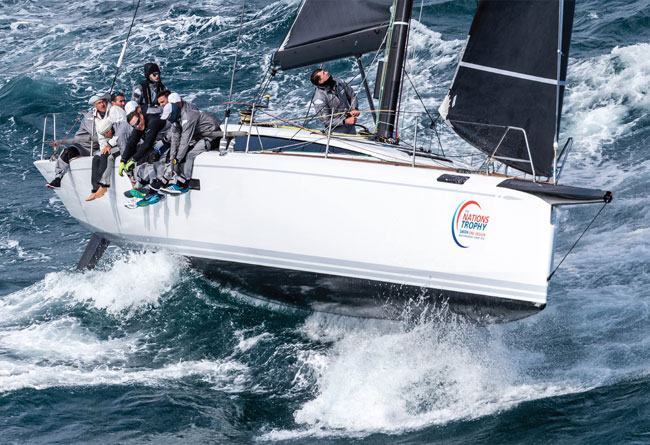 It was a bold move and it seems to be working. Leonardo Ferragamo and Enrico Chieffi’s big idea – to rekindle the Corinthian spirit and the intense, but gentlemanly competition between nations, of classic regattas such as the Admiral’s Cup and Sardinia Cup, in a carefully managed one-design format, propelled by the powerful brand values of Nautor’s Swan – is steadily gathering momentum.

The inaugural edition of ClubSwan’s biennial tournament, The Nations Trophy, in Palma last autumn was, by all accounts, a very promising start, with close competition in all three one-design classes, ClubSwan 50, Swan 45 and ClubSwan 42, and a total of 28 yachts representing 11 nations.

This season’s follow-up series, The Nations Trophy Mediterranean League, has built on that success, enabling owners and crew, as Chieffi says, ‘to maintain the intensity of competition and friendly rivalry witnessed last October in Palma’.

The four-part Mediterranean League series kicked off in March with Monaco Swan One Design, where competitive fleets representing eight nations battled it out over four days of inshore windward-leeward racing in a challenging range of conditions that varied from light and fluky to a spanking strong breeze. ‘The race committee was perfectly patient and did an exceptional job dealing with, at times, pretty difficult conditions,’ said Ken Read, tactician on the winning ClubSwan 50 Cuordileone.

‘I give them as much credit as the sailors, because it was a hard job to get that many good races off. There was not one race that turned into complete weirdness. There were big shifts, but if you played them right you’d win and if you did not, you lost. That is all you can ask as a sailboat racer.’

Then it was back to Mallorca in May for PalmaVela, where the three ClubSwan fleets joined 11 other classes. Fickle winds in the Bay of Palma and contradictory predictions from the various weather forecast models provided a complex tactical challenge. The three eventual winners had to work very hard for their podium positions, right through to the last race when Germany topped the leader board.

Main picture: the Russian ClubSwan 50 Skorpios, owned and helmed by Andrey Konogorov (who also manages the eponymous Greek island) scored a storming ORC victory in the classic 241-mile Giraglia passage race from St-Tropez to Genoa via the north end of Corsica. The ClubSwan 50 fleet is fast becoming established as a truly competitive one-design class. Nice boats too…

In the ClubSwan 50 class, Hendrik Brandis’s Earlybird beat the Swiss boat Mathilde by just two points. ‘It was such a challenging way to finish,’ said Jesper Radich, Earlybird’s tactician. ‘We had to sail very safely and not be last, which in this fleet is not that easy. The only way to do that is to attack and sail well. I really had to get that balance between attacking and defending. We sailed quite well in the middle of the fleet. I did the maths and we were OK. The thing is, we saw one boat sail away 300 metres ahead of us in three minutes, it was that kind of day. So we could have ended up last.’

Competition in the Swan 45 class was just as close, even for the experienced team aboard Elena Nova, who eventually emerged victorious. ‘It is the sixth time we have won PalmaVela,’ said ownerdriver Christian Plump, ‘But it is such competitive racing in this class and this was the most difficult time. The difference between the first and the last boat was no more than 10 lengths. It is such fun. I am so relieved to have won.’

Next up for the ClubSwan fleets was the 66th edition of the Giraglia, with three days of inshore racing on windward-leeward courses off the beaches of St- Tropez followed by the classic 241-mile passage race to Genoa via the eponymous Corsican rock. A gentle start to the inshore racing saw close competition in eight to 12-knot winds, followed by a frustrating calm on the second day when the races had to be cancelled, and a blustery 25 knots and big seas to test the crews’ mettle on the last day.

Italy emerged as overall winner of the inshore races with a particularly strong performance by Lorenzo Ferragamo’s Cuordileone. The Russian ClubSwan 50 Skorpios, owned by Andrey Konogorov, scored a storming victory in the passage race, winning overall in the ORC fleet and claiming the Nucci Novi Challenge trophy.

Back in Palma again, the final event in The Nations Trophy Mediterranean League was the 37th edition of the Copa Del Rey. A record-breaking entry of 2,500 sailors competed aboard 152 yachts in testing, light sea breezes, including a strong turn-out of 36 Swans, 26 of them in the three one-design classes.

There was royal patronage in the ClubSwan 50 fleet, with the Spanish King Felipe VI racing aboard Aifos 500, but Germany dominated the final results, scoring a 1-2-3 with Brandis’s Earlybird, Sönke Maier-Sawatzki’s NiRaMo and Stefan Heidenrich’s One Group on the podium.

Earlybird’s win also clinched its class victory in the Mediterranean League 2018, after a hard-fought series. As a whole, the ClubSwan 50 cemented its credentials as a truly competitive one-design class, with 10 boats entered, representing seven countries. Six boats won races and nine of the 10 claimed a podium position at some point during the regatta.

The Spanish Swan 45 Porron IX, cannily skippered by Luis Senis Segarra, had already won its class in the Mediterranean League, but competition was fierce nonetheless at Copa Del Rey, with four of the five boats each winning a race. Jan de Kraker’s Dutch-flagged K Force narrowly won the regatta, with first place separated from fourth by just five points.

Competition was just as tight in the ClubSwan 42 class, where the top three boats were separated by just two points and the final race proved crucial. A strong performance in that last race by Jose Maria Meseguer’s crew on Pez de Abril won not just the regatta, but also their class in the Mediterranean League overall rankings.

‘The League is excellent, with so many boats competing and so equally matched,’ Meseguer said. ‘To win it is something impressive. The community is great, the owners and crews ensure the ambience is fantastic. I don’t think there is anything else like it.’

With all four events completed, Italy proved the most consistent country and won the Mediterranean League 2018, thanks to the strong finishes from the ClubSwan 50 Cuordileone and ClubSwan 42 Selene. Spain took second place, Germany third, Russia fourth and Switzerland fifth. Across the season, 14 countries were scored for the League, with the most of them represented at two or more of the four events.

Looking ahead to next year, the 2019 Mediterranean League will once again kick off with Monaco Swan One Design, scheduled slightly later than this year’s event, from 9 to 13 April. Next up is a brand-new regatta in Tuscany, Scarlino Swan One Design, from 30 April to 4 May, followed by the Giraglia from 9 to 15 June and the Copa Del Rey from 30 July to 3 August. The four-part series will feed in to the main biennial event, The Nations Trophy 2019, which will once again be held in Palma de Mallorca from 8 to 12 October.

‘The Real Club Nautico de Palma is a perfect venue for the Swan One Design events,’ said Leonardo Ferragamo, skipper of the ClubSwan 50 Cuordileone and group executive chairman of Nautor’s Swan. ‘The Nations Trophy concept was launched in Palma last October and was a great success because the values of the RCNP perfectly match those of Nautor’s Swan and their organisation is exceptional.

“For those reasons, we had no hesitation in including both PalmaVela and Copa del Rey in the Med League 2018, and in confirming Palma as the venue for the 2019 edition of The Nations Trophy.’

The ClubSwan 50 fleet will have grown substantially by then. Already, 22 boats are afloat and racing, with more in build and due to join in the action next year. ‘In 2019, the class will reach maturity and the level of competition will have grown dramatically,’ says class president Philippe Oulhen.

‘Only the very best yacht clubs, like the Real Club Nautico de Palma, can deliver the exceptional level of race management we need to handle the aggressive starts, packed mark-rounding and tight finishing.’

To encourage participation in the Mediterranean League 2019, the teams’ performances throughout the season-long League will have an impact on their final results in the Trophy. In a further twist, The Nations Trophy 2019 will also be the World Championships for the ClubSwan 50 and Swan 45 classes and the ClubSwan 42 European Championship.

Joining the three established fleets at The Nations Trophy 2019, a brand new one-design class, the ClubSwan 36, will sail its first major regatta. With a flush deck and chamfered bow, twin rudders and a transverse, sliding C-foil, a highly tweakable carbon rig and a wardrobe of just four sails, no interior accommodation whatsoever and an impressively light displacement of 2.5 tons (2,500kg), this new boat is the logical next step in the new direction of Swan designs that started with the ClubSwan 50. It’s designed to give a crew of six the ride of their lives, and a fleet of 10 boats is expected to show up in Palma next October, with owners at the helm and a 50/50 ratio of amateur and professional sailors on board.

Click here for more information on The Nations Trophy