Skip to content
You are here
Home > Advertorial > Future Fibres: Don’t shake it all about 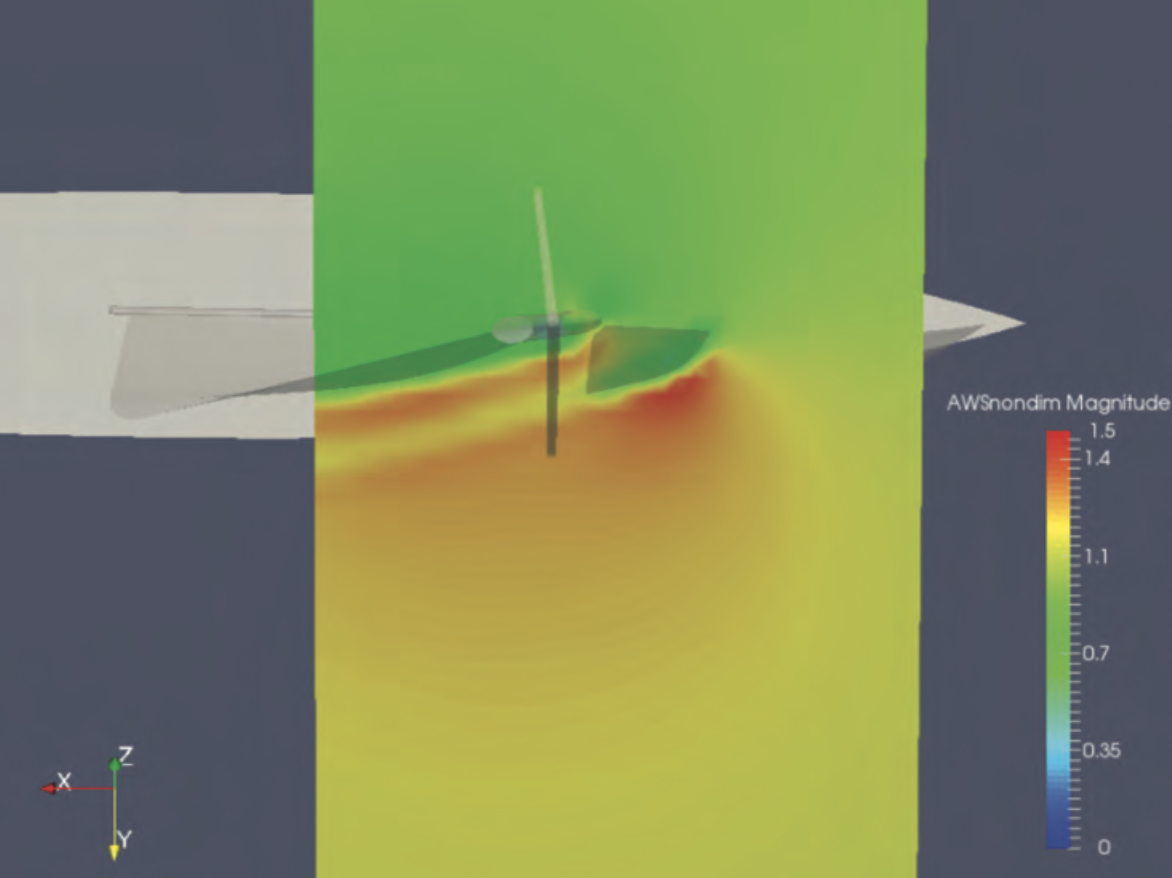 The theory of vortex shedding is well known to golfers with their little dimples (the balls, that is!) It was also toyed with in the past by 12 Metre sparmakers – so why not extend the benefits to the rigging itself?

The parentage of Future Fibres’ latest answer to high-tech composite rigging, becomes quite clear when you start looking at how AEROsix is put together. An extended elliptical aerofoil shape, AEROsix takes the best elements of Future Fibres’ multistrand carbon rigging, ECsix, and combines it with RAZR, Future Fibres’ solid carbon product.

Each of AEROsix’s parents could claim great advantages over what came before them. But while these products have become established as the go-to choices in the market place, Future Fibres asked itself, what next? In the May edition of Seahorse, p72-73, we looked at the reasons why the company felt it was time to develop and launch AEROsix into the market.

However, things have moved on apace even in the past few months as Future Fibres has conducted more research in conjunction with the Wolfson Unit at the University of Southampton. Some interesting and somewhat unforeseen discoveries have emerged out of the R&D work at the Wolfson Unit, as R&D manager at Future Fibres Jonathan Duval explains: ‘You might think that a smooth surface on your rigging is better aerodynamically than a rougher, braided surface such as we have with EC6 and now AEROsix.

‘However, we have discovered that not only does a rough or braided surface have a significant effect in dissipating any vibration, but it also helps with the flow. If you think about a golf ball, the surface isn’t smooth but has those multiple dimples. By creating forced turbulence, you reduce the vortex shedding at the back of the rigging, and so you bring the laminar flow back together more quickly compared with smooth rigging.’

Duval concedes that a smooth finish is better on the forward-facing surface. ‘The trouble is, the air flow gets very, very disturbed on the back of the rigging, and the disruption of laminar flow far outweighs any small gain made on the front face of the rigging.’

The initial driver of AEROsix was to create a high performance rigging option with a more aerodynamic profile compared with round or even aerofoil-profile rigging. As the previous article explained in detail, the results of wind tunnel research at the University of Auckland and VPP modelling by Future Fibres and North Design confirmed a significant benefit of the 2.7:1 extended ellipse profiled rigging over both 2:1 elliptical rigging and the round- section rod.

For a typical-length day race at a superyacht regatta, the gain translated to a theoretical 19-second advantage. For a two-day offshore race like the Caribbean 600, the difference could add up to as much as 12 minutes.

However, the side benefits of AEROsix have started to look as interesting as the aero gain, with both the reduction in vibration and drag providing big advantages. As yacht designer Juan Kouyoumdjian points out: ‘I have been working on the development of a 125ft high performance boat where we are looking for performance gains wherever they can be found. We saw very early on that the potential of AEROsix was worth investigating. The aerodynamics were certainly important, but the potential benefits of reduction in vibration were also very interesting to me.’

‘You start to realise the drag related to vibration is as important, if not more so, as anything you can do with the aerodynamic alignment of the rigging. Therefore the drag reductions one can expect from this lack of vibration could be substantial, not to mention the comfort factor because of the whole boat not receiving this noise that comes from the rig. That’s where I see the most substantial gains in performance.’

Danny Gallichan, skipper of the Wallycento Magic Carpet3, has almost one year’s experience with AEROsix installed on the boat earlier in the 2018 season. He has been delighted with the lack of vibration, particularly when sitting stationary in the marina or at anchor. ‘We’ve sat through quite a bit of different wind, we’ve sat in Porto Cervo with quite a lot of Mistral conditions and I haven’t seen any of the vibration that was a concern originally. I think ellipse is better than aerofoil and it actually seems better than the more traditional round rigging.’

Duval says that such is the amount of vibration generated by some forms of round rigging, it’s virtually equivalent to having two rods mounted side by side. Elliptical rigging smooths out the vibration to the point where it’s virtually undetectable whether the boat is in motion or stationary.

Drag reduction
When it comes to analysing the drag reduction benefits of elliptical rigging, Duval says the windward- facing rigging isn’t the main issue. ‘One of the concerns about an elliptical shape is that people think it presents a wide profile to the wind on the windward side of the boat. However, a great amount of drag is coming from the leeward side too, in the slot between the jib and the main, because you’ve got this massive wind tunnel.

That’s where the drag comes from. The air is accelerated through the slot by at least 50 per cent, so despite the angle of airflow being narrower, this increased air speed means that the drag generated on the leeward side shouldn’t be disregarded. Therefore a good balance between both sides is required to reduce drag forces.

Chiming with Juan K and Danny Gallichan’s enthusiasm about minimising vibration, Monks sees this as a major selling point for AEROsix. ‘For superyacht captains and anyone who knows the industry, you don’t want resonance going through the boat, you don’t want owners to be upset by having noisy rigging. It’s an important comfort and performance factor, to be able to get rid of those vibration and resonance issues.’

Monks has every confidence that AEROsix will deliver, based on more than eight years’ experience with ECsix. ‘We’ve sailed around the world, on occasion in very severe conditions and we’ve found ECsix to be superb in terms of reliability. From the service side, we were in New Zealand when we did our five- year service period. Packaging it up, sending it away and having it serviced in Spain was easy. That ease of transportation is important to us and it’s one of the appealing factors of AEROsix.’

‘AEROsix brings benefits in both of these scenarios. Its extended ellipse leads to minimum drag in high speed and low wind angle leeward side. Whilst the rough surface also provides exceptional aerodynamic performance for the range of angles of airflow on the windward side. This makes AEROsix the best solution to date. We’re going to be running some VPP analysis to put some hard figures on just how much wind reduction we’re looking at.’

Spreader attachments
Spreader attachments and terminals for AEROsix have been designed to the same specification as ECsix, making it straightforward for existing ECsix rigs to be swapped out for AEROsix. ‘Some people have been concerned about the robustness of the plate,’ says Duval. ‘However, the plates are engineered to be able to resist impacts and to achieve this robustness we developed a special resin and placed special carbon reinforcements in the required places. The key thing is that each plate goes from the top of each diagonal to the bottom of the cable, so there are no plate joins along the cable. When we manufacture the cables, we ensure that the strain on every single element of the rigging is the same. So when the cable is working in tension at working load, the strain on the rods and on the plates is identical – everything works together. The tension is spread equally across all elements of the rigging. The combination of all those points means that AEROsix will stay as robust as the ECsix product.’

The bonding surface for the cone
Duval says the cone has been designed to have the same break strength as ECsix. ‘For our existing customers it’s important to be able to easily replace their ECsix rigging with AEROsix if they choose to do so. This is what happened with Magic Carpet because they’ve got the two setups, they’ve got both EC6 six and AEROsix. We have therefore designed the cone so that the compressive pressure on the cone is operating at the same level.’

Coilability and ease of transportation
One of the major limitations of solid carbon rod rigging is the near impossibility of being able to coil it. This makes transportation of rigging very difficult. Multi-strand rigging on the other hand is easy to coil – and AEROsix too can be coiled, according to Duval. ‘With ECsix we have two types of carbon rods, 1mm and 2mm diameter. The 2mm rods require a bigger coiling radius when you coil them up for transport. With AEROsix, we’re looking at a coiling radius close to the 2mm ECsix because of the thickness of the blades within the AEROsix structure.’

While it’s still early days for AEROsix in the real world, all the signs are very encouraging from the early adopters, not least the Wallycento Magic Carpet3, the IRC52s Beau Geste and Ichi Ban, and the Gunboat 66 Mach Schnell. ‘AEROsix has met all our expectations,’ says Gallican. ‘It does what it says on the tin. It was straightforward to set up on the boat, and it sets up really well. It all went together pretty nicely and we had very good backup from Future Fibres.’