Skip to content
You are here
Home > LATEST > Full reset 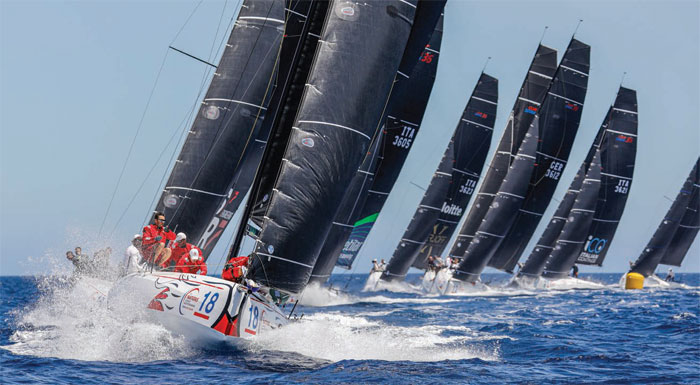 ClubSwan Racing did a brilliant job delivering a super-successful 2021 racing season after all of the global challenges – and 2022 is promising to be just as good.

Get ready for more of the same. Following a successful 2021 racing season with a series of memorable regattas in world class venues, ClubSwan Racing has unveiled its 2022 calendar, offering another season of fierce and friendly competition.

Racing has been in Swan’s DNA since the beginning and Nautor’s Swan regattas are eagerly awaited by owners and crews. The key to success of these ClubSwan Racing events – for both rating and one design fleets – is the dedication of a vastly qualified team led by highly experienced Federico Michetti, head of sports activities at ClubSwan Racing.

The 2022 one design calendar will see large gatherings of Swans at some of the best places to sail in the Mediterranean, selected by the ClubSwan Racing team to offer great competition out on the racecourse, alongside fun, entertainment and top-level facilities ashore for Swan owners and Nautor’s Swan partners.

The four one design classes – namely the ClubSwan 50, Swan 45, ClubSwan 42 and ClubSwan 36 – will kick off their season with a competitive start at the Tuscany Challenge from April 26 -30. Organised with the Yacht Club Isole di Toscana, the beautiful setting of Marina di Scarlino in the Gulf of Follonica is known as a sailors’ paradise for the amazing conditions it offers in terms of racing and weather. The teams will have the chance to meet and train in the same venue at a warm-up event from March 25 -27.

The fleet will then head to the Sardinia Challenge and the crystalclear waters of Villasimius, on the breezy south-east tip of the island, from May 31- June 04. Based in the world-class Marina Di Villasimius the fleet will be racing in spectacular conditions against the backdrop of Capo Carbonara and in the waters of the Marine Protected Area, in effect an Italian national park and marine nature reserve.

‘The Swan One Design Circuit this year comes to some of the most appealing racing courses in the world. We chose Scarlino as our home and we added the two new locations of Villasimius in splendid Sardinia and Valencia for the World Championship. Each of these venues offers all the ingredients that make an event successful sport wise and fun wise. Valencia will be the stage to crown the world champions of each one design class and we are very excited about it,’ says Michetti.

‘We will then head to Palma de Mallorca for the Copa del Rey, another milestone in our calendar. Nautor and the RCNP have a longterm partnership and this, together with having a great number of Swans competing and the professionalism of the team at the Real Club Náutico de Palma are just a few of the things that make us feel at home. The vibe will be great this year too and we are all excited and looking forward to start.’

Meanwhile, 2022 is also the year of one of the most important events of the Nautor’s Swan brand, the biennial Rolex Swan Cup, organised by the Yacht Club Costa Smeralda and Nautor’s Swan together with its longstanding partner Rolex, from September 11 – 18 in the amazing setting of Porto Cervo, Sardinia.

Hosted on even years in one of the best venues in the world, the 21st edition of this unmissable regatta has all the elements to be spectacular: an international fleet, an array of passionate owners who are talented sailors, pros and amateurs, a stunning yacht club and a title sponsor known for the excellence of its products. The Rolex Swan Cup is a tradition, a weeklong feast of sportsmanship, camaraderie and spirited racing.

‘The Rolex Swan Cup is one of the pinnacle events by Nautor’s Swan, and after the cancellation of the 2020 edition we are amazed by the response we’ve already had in terms of participation,’ says Giovanni Pomati, Nautor Group CEO.

‘Having all generations of Swans participating in one venue is something inspiring and thrilling for us. It’s like watching a movie of the evolution of our brand over the decades with the same elements of quality, performance, innovation, reliability and elegance that make a Swan unique.’

However, Porto Cervo does not mark the end of the racing season for the smallest yachts in the Nautor’s Swan family. The ClubSwan 36 fleet will move on to Split in Croatia, from October 4 – 8, where they will compete for the ClubSwan 36 Europeans title for the first time.

The remarkable development of one design and handicap racing at Nautor’s Swan stems from the inspiration of its chairman Leonardo Ferragamo, and his vision to position the brand as one of the leaders in the sports field.

The vision started to become a reality with the launch of the Swan 45 in 2002, the ClubSwan 42 in 2006, then the game-changing ClubSwan 50 in 2016 and the innovative ClubSwan 36 launched in 2019, which is also available with a hybrid propulsion unit. The brand continues to grow with the revolutionary ClubSwan 125 – which claimed line honours in her first regatta, the Rolex Fastnet Race – and the brand new ClubSwan 80, expected to be launched this spring.

Alongside the Swan One Design Racing Calendar – which has been carefully compiled not to overlap with major ORC events – ClubSwan Racing has also created a number of regional multi-event Swan Series, intended to bring the community of Swan owners together at competitive events in their region, and to recognise the best-performing boats across the season.

Taken together with the Swan Maxi Series, with regatta locations in the Caribbean and Mediterranean, ClubSwan Racing presents the passionate community of Swan owners and sailors with a spectacular range of competitive events, offering something for everyone involved. 2022 looks set to be a year to remember.