Skip to content
You are here
Home > LATEST > Fresh look 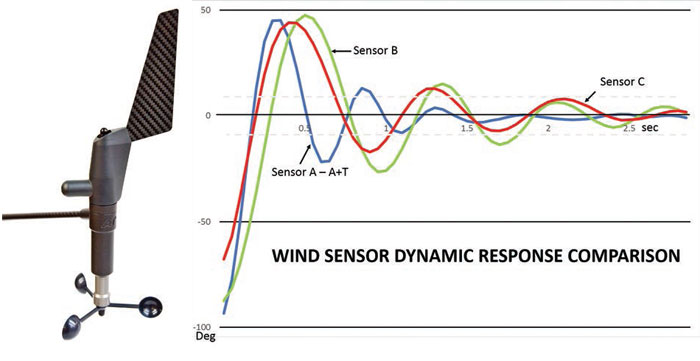 The better the instrumentation the more important the quality of the inputs upon which the system depends. Which is why the engineers at A+T decided it was time to turn their attention to the once humble wind sensor.

It does not need stressing that fully accurate and fast wind measurement is critical to all aspects of a racing yacht’s performance and equally important for the ever more complex sail systems on superyachts. Many companies have looked at novel ways of measuring wind including acoustics, but the spinning cup for speed and the vane for apparent wind angle are still the most accurate and reliable method. The A+T 500 series is a new design that moves this technology forward. It’s in full production and provides compatible upgrade parts for the large installed base of existing B&G systems even dating back to the 1980s.

The main attributes of a “perfect” wind sensor include resolution, accuracy and fastest possible response time. Dynamic response is particularly important if masthead motion is compensated which is crucial both for raceboats and, with ever taller masts, superyachts.

A+T calibrates all masthead PCBs and complete units on a precision jig in steps of less than 0.1° and stores the calibration in the unit’s memory. Angle accuracy and repeatability is better than 0.2° compared with +/- 0.5° claimed of other wind sensors. A version can output eight pulses per cup revolution to give higher light air speed resolution.

The key to improving the directional dynamic response is to maximise the ratio of the “wind following” moment to the moment of inertia of the vane assembly. For each incremental area of the vane, wind following moment is proportional to its distance from the rotational axis; moment of inertia is proportional to the square of this. This ratio is thus improved by keeping the vane aspect ratio high as shown above.

For the same reason the counterbalance is as short as practical. This reduces its windage, which is fighting against the vane. It is also positioned to avoid disturbing the flow over the vane at all reasonable heel angles. The user may fine tune the counter-balance to keep the vane in perfect balance if it changes.

A carbon fin further reduces overall weight and inertia. The A+T vane assembly is some 25 per cent lighter than others on the market.

Meanwhile A+T has introduced fully ceramic bearings with a third of the friction of traditional stainless bearings. They don’t corrode and last longer. The sensor’s body is made from conductive material which we know, from many years of servicing wind sensors, improves resistance to damage from atmospheric static during thunderstorms.

The output from wind tunnel response testing is shown in the graph. In each case the wind speed is the same (8 knots). Three different models of wind vane made for raceboats were held at nominal 90° to the flow and then released.

For both highest resolution and compatibility with many existing systems (including A+T and B&G WTP, H5000, H3000 and H2000) the A+T wind sensor has analogue outputs; cup rotation pulse and 3 phases for angle.

A version is also available with NMEA0183HS (38,400 baud) digital output updated at 20Hz. This, like the analogue output, has no damping. In A+T’s view any wind corrections or damping should be done in the instrument processor.

Spares for 213 type sensors
The A+T wind sensor has also been designed so that all of its parts including improved bearings, cups and PCBs are upgraded replacement spares for B&G 213 wind sensors of which there are tens of thousands installed on a very wide range of boats. These parts are all held in stock for same day shipping.

The sensor is available both as a traditional “stubby” model and with a full range of vertical wands. An upgrade service is also provided to fit this new sensor to customers’ existing vertical wands.

The sensor described here is the first step of a number of planned further innovations, the next of which A+T anticipates announcing at METS later this month.

A+T has no connection or affiliation with B&G/Navico.