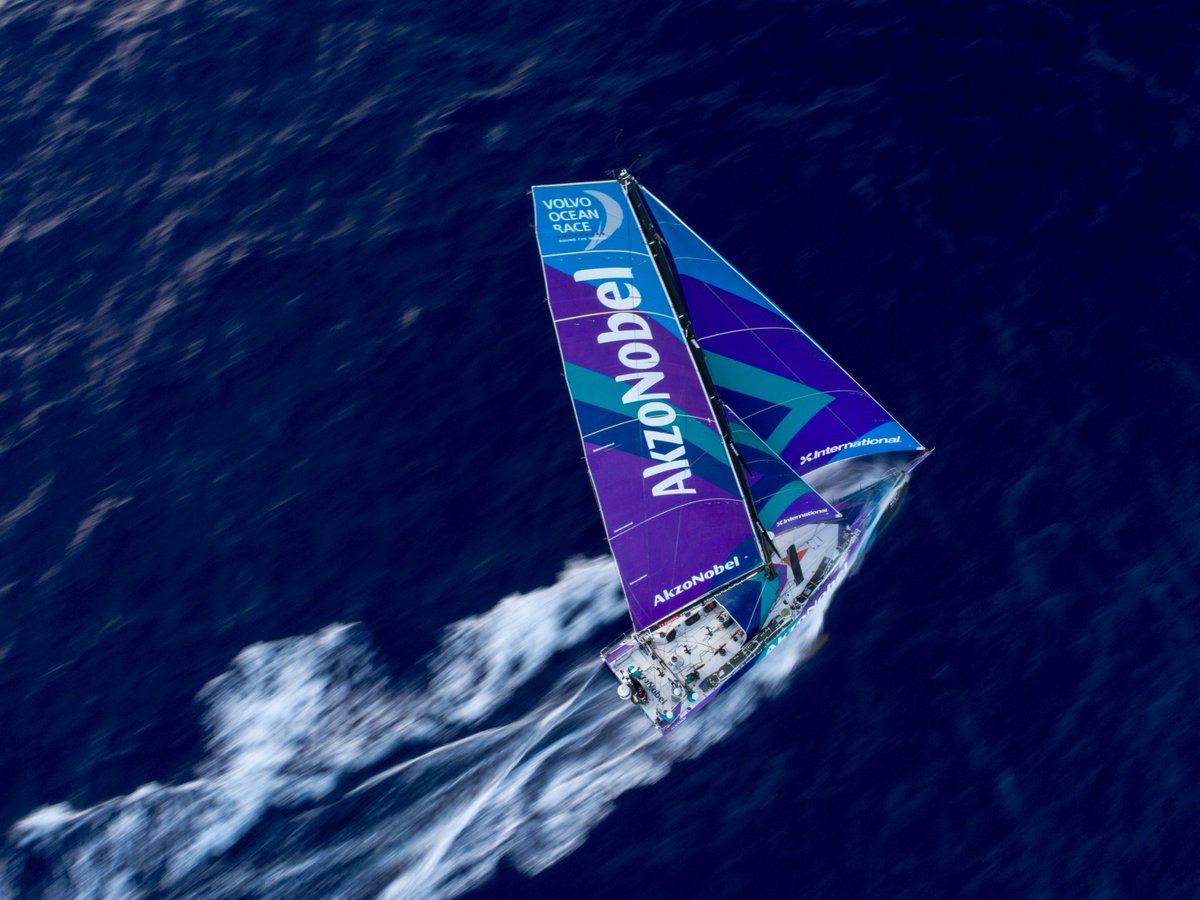 The fact that the last two Volvo Ocean Races took place in identical 65-foot one-design boats made for two of the hardest fought editions in the round-the-world race’s 40-plus-year history.

With the sails, mast and hulls all equalised, all that separated the teams from each other on the water was their individual ability to get the best out of their boats out on the open ocean.

The oft-repeated mantra commonly heard around the team bases was that the team that learned quickest how to make their boat go fast would be the one holding the trophy at the end of the race.

Out on the water crews would often opt to stay close each other – within clear visual range of possible – so they could get immediate feedback on how experimental tweaks to their boat’s setup affected their performance.

But while what the sailors could learn for themselves through look and feel and innate instinct was hugely valuable, most teams also had a shore-based team member studying and analysing what was going on in the fleet far out sea.

In the 2016-17 edition of the race I worked in the communications team for the Netherlands entry team AkzoNobel and got to witness first-hand the work of their performance analyst Rosco Monson.

I sat in on many of Rosco’s post leg de-briefs where he would talk through a dazzling array of slides packed with performance graphs as he broke down the team’s performance on the previous leg – including comparisons with how the other teams had performed.

Before we talk about Rosco’s methods for gathering this data, a bit about his background.

The first thing to say is that Rosco is no desk-jockey, but rather an accomplished sailor and navigator in his own right. He has a BSC(hons) Software Engineering Degree and holds an MCA Master 3000GT captain’s licence that qualifies him to drive super yachts up to 3,000 tons.

He has 34 Atlantic crossings to his name and the last count has been involved in setting 11 world speed sailing records. Nor was this his first time working for a Volvo Ocean Race team as he previously worked for Paul Cayard’s Pirates of the Caribbean syndicate as on shore navigator and electronics & systems engineer in the 2005-06 race.

“I suppose my background comes from the academic side,” he told me. “I got a degree in software engineering, so I come from a software programming background and then also to back that up I’ve got my Master 3000 ticket.

“I spent a lot of years on the technical side, understanding and learning the software and computer side of making it all work. And then in the last couple of years, I’ve been involved with some very big super yachts helping them develop some systems that have never been done before.

“That’s always what I’ve specialized in, pushing the limits of technology, so it was really nice to come back to the Volvo. Although the boats were all the same and they had been simplified quite a lot, it was really all about extracting as much as possible out of these boats that are all the same.”

Why though does a crew of highly experienced professional yacht racers need the services of a performance analyst to tell them what they are doing right or wrong out on the racecourse?

“Using software to analyse all the data that comes through was critical,” Rosco replies.

“Because the sailors can’t necessarily feel it at the time because the changes are so small, and the performance gains are so small. But all those small gains, in a fleet of boats that are equal, turn into big miles on an open ocean racetrack.”

Rosco broke his job with the team into three key roles:

“I was the team’s on-shore navigator, basically looking at the locations we were going to from an in-shore point of view for the in-shore regattas, as well as looking at weather long-term for each of the legs coming up.

“Another element was looking after the electronic side of things. Firstly making sure that the boat’s electronics are working for the navigator, and that all the information we put into those systems is correct – because software is only as good as the information you give it,

“The final element is actually just basic data analysis, but actually it’s more like forensic engineering. There is a similar role in Formula 1 but whereas they get the data in real time streamed live from the car, in the Volvo Ocean Race we only got it after the leg had happened.

“Then it’s my job to analyse that data, make sure the boat’s performing the way it’s supposed to, and also to find holes in how the sailors are sailing the boat and if we can help them in any way to make it go faster.

“The real forensic part was gathering knowledge on all the things that are happening to the other boats to try and get a performance edge to give the guys something extra on the race track.”

For me, this forensic performance analysis element was the most intriguing part of Rosco’s role with the team.

Once I sat puzzled during sailing team leg debriefs as he described a rival team’s dagger board height on a specific day and time which he had identified from the tracker data that they were performing particularly well.

How the hell could he know what height their dagger board was at when he was at home on the south coast of England and they were mid-Atlantic crossing the from the northern hemisphere to the south?

“I watch the tracker like everyone on shore is watching it,” he told me. “But I look at it in respect to both tactics and performance so that after the leg I can to help Jules [Salter, team AkzoNobel navigator] analyse the leg.

“Although the boats are in the middle of the ocean, I can watch the tracker to see when they are going fast, and then to try to work out what they’re doing I watch the photos, the videos and all the media that comes through.

“The media coming off the boats is critical for me to do my job. The more photos and videos they show, the better it is for me as it means I can understand what’s going on on the other boats.” So when the rest of us see a seemingly innocuous photograph of a crew member giving the on board reporter a smiling thumbs up from the remote expanses of the South Atlantic, Rosco would look past the smiling sailor to see what he can detect about the way the boat is set up.

“I would look for sail trim, heel angle, the amount water on the deck, dagger board height, where the stack was, which sails were up and how they were set up. A photo like that could give me a hundred data points that I could use to understand to why they were going faster.”

As the race progressed and all the teams got wise to what they could learn about other teams from the OBR content Rosco noticed a decrease in the amount of useful information being sent back from the fleet.

“I think the teams started to lock down,” he said. “Realising how much performance information the OBRs accidentally gather I think all the teams had a chat with their OBR about what to film and what not to film.

“If you watch the navigation station shots later in the race, none of the important information is up on the computers anymore. People were very careful what they photographed.”

Despite how useful the on-board images and footage could be to someone in Rosco’s role, he admits the aerial content captured by the OBR drones often saw him rubbing his hands in glee. “We only used to get the helicopter shots, which took us about 10 miles offshore after the start. Now we get these amazing breathtaking shots of the boats and the sails from across the fleet where we can see exactly what sails they are using and how they are set up.”

Going back to the comparison with Formula 1 Rosco says the professional yacht racing world has woken up to the potential of investing time and money in performance analysis.

“In Formula 1 it’s a huge team – they have hundreds of people analysing this data real-time. Obviously, we’re not at that level but we’re trying to achieve the same thing – trying to achieve small gains out of anything we can learn.”

Those small gains – that all add up when you are talking about a race around the world when the boats are racing across ocean can be at sea for up to three weeks at a time – are largely down to what the crews can learn about how they ‘mode’ the boat for the conditions they find themselves racing in.

“I suppose my job and the crew’s job was to extract the most performance possible out of the product, which the case of the last race was the Volvo 65,” Rosco explains. “My specific part of that was to try to find all the avenues and small areas that we can test ways of getting a little bit more out of the boat.

“Moding the boat was about all sorts of things depending on the conditions. It’s a complex combination of all sorts of things like rudder angle, heel angle, sail trim, sail setup, mast rake, water ballast, stacking, driving technique, how the trimmers set the sails – and those are just the basics.

“There were just so many elements and different combinations that you could try in that race as you tried to squeeze the last 0.1 of a knot out of the boat. There was always the potential for more incremental gains and that’s what made the performance analyst role so fascinating in my opinion.”