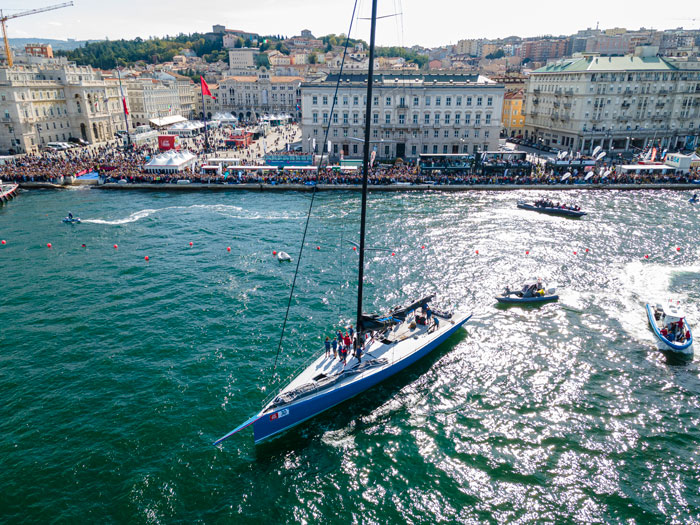 I am writing this during the last big regatta of the year, Les Voiles de Saint-Tropez, where the Maxis now have the second week all for ourselves. In fact, we are coming to the end of a busy and successful season and a spectacular return to near-record fleet sizes – writes Andrew McIrvine, International Maxi Association Secretary General.

On the Sunday there was an amazingly efficient transition here in the old port of St Tropez, when the forest of wooden masts belonging to the classic fleet (containing no fewer than seven giant schooners) was replaced in short order by the even taller collection of carbon rigs of the modern Maxi fleet.

I cannot miss this opportunity to mention one very honourable and respectful gesture by two British Maxis. Her Majesty the Queen died suddenly during the Maxi Yacht Rolex Cup being held in Sardinia. The following day Jethou andNorth Star left as normal for their start. After the start they sailed for 96 seconds and then stopped and dropped their sails. The crews then lined up and removed their caps in a very moving tribute to our dear departed monarch.

Despite a successful season when the quality and quantity of boats taking part exceeded expectation, many boats changed hands and other new ones were launched, and with even more exciting new projects on the horizon, one cannot help noticing that some aspects of our sport are heading into troubled waters.

We are failing badly on a large number of measured parameters that are increasingly recognised as important. In our crews we have very little diversity in age, gender or race. Our boats and equipment largely define the opposite end of the spectrum regarding sustainability, despite efforts from organisations such as Wendy Schmidt’s 11th Hour Racing – owner of the beautiful Marcelo Botín-designed 85ft Maxi Deep Blue. The Maxi world is also sheltered from other realities of the sport with our campaigns generally very well-funded –while at the same time providing an enormous amount of work for the marine industry.

With fewer crew requiring the ultra-specialist roles of the modern flying America’s Cup and SailGP, Maxi crews have a profile closer to those of the 52 Super Series and 44 Cup, with a relatively low turnover of ageing crew. This low churn means that opportunities for young sailors are few and far between, offering little by way of a reliable career path to aspiring young professional sailors.

Another perennial problem is how to fairly rate a Maxi fleet that is becoming increasingly diverse in terms of age, size and genre, from ever faster thoroughbred racers to yachts that are better than ever before in their joint requirements of cruising and racing.

Class splits are always contentious, particularly as absolutely no one wants to race against the super-refined boat type formerly known as the Maxi 72 (most of which have now been stretched and reconfigured for IRC, moving them outside their original class box). As I have touched on before, we now try to race boats together in limited rating bands so at least their performance is similar.

One anomaly that was highlighted in this light-weather edition of Les Voiles de Saint-Tropez is the marked difference in performance of some boats with changes in wind strength. Some rating rules therefore try to allow for this by using different time correction numbers for different conditions, but this becomes very difficult when wind strengths vary during a race. I suppose this approach does give at least an impression of fairness even if mathematically it makes less difference than you would think.

Although now employing the concept of splitting classes by performance, rather than length, there is an understandable desire to have some stability and attempt to lock in the class bands over at least one – if not several – seasons as was done for hull length. However, we have at least moved on from the completely impossible and highly subjective definitions of ‘cruiser’, ‘racer-cruiser’ and ‘racer’, replacing these with tangible measurable data.

We will retain the existing hull length cut-off at 100ft, to distinguish Supermaxis from Maxis, but allow those in the 100-115ft range to opt to race with the Maxis if they so wish. However, at both the Maxi Yacht Rolex Cup and Les Voiles the >100ft class primarily consisted of more cruising-oriented yachts whose owners wished to stay well away from a group of competitive 100ft designs with purer racing intentions. By next year there will be more of these purer race yachts such that they will almost certainly make up a separate class – which is very much what they themselves want.

The most difficult class to win in Saint-Tropez contained the most seriously raced groups of both 100 and 72-footers. This class also contained Rambler 88 and Django Unchained (ex-Highland Fling X). This was also the final regatta for that great supporter of the Maxi Association, George David – though his yacht, Rambler, will continue to race under Bryon Ehrhart with most of her usual crew. Django also came with many of the crew who had been successful recently in Porto Cervo when she was still owned by Irvine Laidlaw.

There was an assumption that this class would be dominated by those same highly competitive ex-Maxi72s, but actually this was not the case. The two 100-footers Magic Carpet3 and Galatea held their own to finish third and fourth in class, beaten only by Cannonball and NorthStar. Cannonball certainly had the most impressive performance, nearly always ahead of the much larger designs on the water as well as on corrected time. This Botín design, and former Maxi72 World Champion, has had a lot of changes made to her over last winter including being lengthened to 75ft, which certainly seemed to give her a considerable advantage in St Tropez.

Also in St Tropez the foiler Flying Nikka finally joined the main fleet, starting with the highest-rated boats – her own rating of 3.831 is off the scale. She raced in Sardinia in a class of one – but in the south of France demonstrated that she can be safely handled among other large yachts despite her dramatically changing speeds between displacement and foiling and often extreme sailing angles.

Across the season it was Alessandro del Bono’s 27-year-old former ILC Maxi Capricorno that won this year’s Mediterranean Maxi Inshore Challenge, which went down to the wire at this last event where four boats could have claimed the fine Victorian silver cup. They also so nearly won this regatta had they not fallen foul of our new OCS system, where you cannot go back but have to take a 20 per cent scoring penalty. In the end Terry Hui’s Lyra, the present IMA Maxi European Champion, continued her almost unbeaten run.

A disappointment this year was that our planned new Maxi multi – hull class never came to fruition in St Tropez due to a lack of entries; perhaps it was a bit too soon. But with careful planning, encouragement and some luck we intend to rectify this next year.

Prospects for 2023 are good. Overall our raison d’être is to keep our Maxi-owner members happy by looking after their interests and representing them with yacht clubs, race organisers and other authorities. We hope that this will ensure Maxi racing is run to the highest standard, making it more enjoyable for all.

A significant surge in membership over the past couple of years encourages us to think that we are going in the right direction.