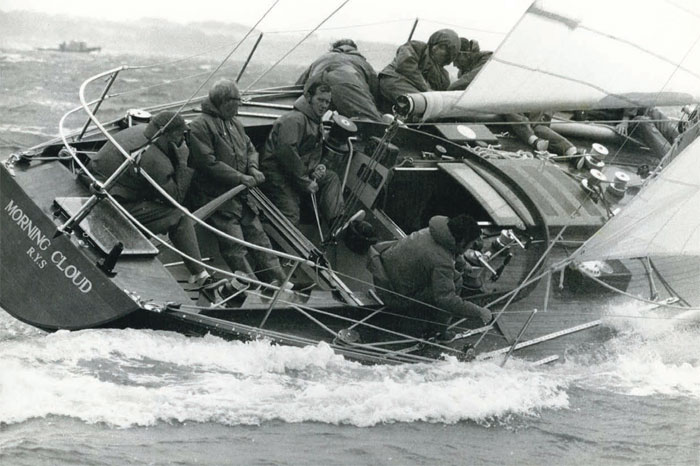 Next year’s Rolex Fastnet Race will be the last edition before the ‘big one’ when the 100th Anniversary event starts off Cowes in 2025 – so this is a good time to look back at the journey to date.

On Saturday 25th August 1925 seven yachts set off from Ryde, exiting the Solent to the east, past the Forts, rounding the Isle of Wight bound for the Fastnet Rock off southwest Ireland where they turned on their heels for Plymouth to be finished by the Royal Western YC. First home and overall winner, Jolie Brise finished in six days two hours and 45 minutes. This was the first Fastnet Race, known at the time as the Ocean Race, and it would strongly speed up its evolution from being merely a fresh challenge for more adventurous cruising folk into becoming today’s highly refined sport. Famously at a dinner in Plymouth at the race’s conclusion, the Ocean Racing Club was created, with Jolie Brise’s owner Commander EG Martin its first commodore.

Certainly there had been offshore, even oceanic, races before this. Notably the brave and by today’s standards foolish transatlantic races contested by the brash young millionaires of the New York Yacht Club, the first in 1866 won by a 25- year-old James Gordon Bennett Jnr (from where the English expletive comes), the race best summed up by its departure from New York in December. Remarkably only six died. This was followed by the fourth race of its kind, the more grown-up and part-politically motivated Kaiser’s Cup in 1905, famously won by the 69m three-masted schooner Atlantic.

In fact, it was a reaction to offshore racing apparently only being for the uber-wealthy in giant yachts that promoted the first of the classic 600-mile offshore races: the Bermuda Race. At the time Thomas Fleming Day, editor of The Rudder, was outspoken in extolling the merits of racing small boats offshore. To counter the guffawing, he proved his point by organising the first Bermuda Race, starting from Brooklyn, New York in May 1906. Three boats entered and the 38ft yawl Tamerlaine arrived in Bermuda five days six hours later. Job done.

After a hiatus from 1910 to 1923 the race resumed, starting from New London, Connecticut and it was in 1924 that Weston Martyr, a British WW1 veteran, yachtsman, adventurer and sailing journalist, at the time working as a ship broker in New York, competed aboard the schooner Northern Light. For Martyr this was life-changing and he returned brimming with enthusiasm, writing a seminal letter to Yachting Monthly: ‘It is without question the very finest sport a man can possibly engage in, for to play this game it is necessary to possess in the very highest degree those hallmarks of a true sportsman, skill, courage and endurance.’

He made comparisons with hunting big game, where the sea was the enemy and requiring as great nerve as when climbing mountains. But he also riled the British yachting establishment, throwing down the gauntlet with the observation that no British boat could compete successfully in the Bermuda Race, because of their lack of experience.

It was Martyr who suggested the present-day course to the Fastnet, of a similar distance to the Bermuda Race – 615 miles. This established a trend in offshore races of that length, spawning the Sydney-Hobart (1945), China Sea Race (1962) Middle Sea Race (1968) and more recently the RORC Caribbean 600 (2009), the Aegean 600 (2020) and this year’s Roschier Baltic Sea Race.

Martyr’s assertions about lack of British experience in offshore racing were certainly correct. At the time UK sailing/yachting was polarised. Racing inshore was highly developed. This was the era of Sir Thomas Sopwith’s Shamrock challenges for the America’s Cup while yachting for the royalty and the ruling classes was inshore in the metre classes. In an attempt to ‘get things back to normal’, in 1920 King George V had Britannia refitted for the umpteenth time and reignited the UK Royal Regattas.

This was a huge programme, spanning the four corners of his kingdom, from the Royal Regatta in Cowes to the Clyde Fortnight. Royal attendance at these events were followed with the same verve as when the Queen in recent years has attended Royal Ascot or the Epsom Derby. Just as King Juan Carlos 1’s participation bolstered Spanish sailing from the 1980s on, so King George V’s initiative revitalised British sailing, bringing pre-WW1 racers like the 23m White Heather, the Fife gaff cutter Moonbeam and the giant Herreshoff schooner Westward out of retirement and causing new boats to be built.

Meanwhile in another corner, the cruising fraternity’s opinion was most loudly voiced by Claud Worth, president of The Little Ship Club and vice-commodore of the Royal Cruising Club, but, most importantly, author of the seminal book Yacht Cruising (1910). His opinion was that while cruising offshore in small boats was one thing, racing them was quite another. ‘In bad weather would they be able to judge when to run before it or even heave to?’ he reasoned. Conversely in the US Herb Stone, editor-in-chief of Yachting magazine in the early 1920s, was breathing life back into the Bermuda Race, arguing that racing offshore does develop sailing and navigation skills and encourages seamanship.

In the UK specialist offshore races were some way from being created, unlike the US where there were craft like the Alden-designed Malabar IV, winner of the 1923 Bermuda Race and the Herreshoff 40ft Memory, the first yacht in the race fitted with, appropriately, a Bermudian rig, which won both line honours and on corrected time in 1924.

In comparison, back in the UK the first Fastnet Race attracted a motley collection. The rules created by the organising committee of three (Martyr plus Martin and Malden Heckstall-Smith, editor of Yachting Monthly) permitted the entry of any “fully decked” yacht of any rig with a waterline length of 30-50ft. They had to be in cruising trim and a carry a lifeboat. Even then there was a restriction on professionals sailing on board, limited to those that could be “normally accommodated in the fo’c’sle,” though these professionals were less Olympic sailing medallists and more salty commercial seamen and fishermen.

Of the 16 entered only seven started; all British save one Spaniard Ingo Simon albeit on a Bristol Channel pilot cutter. At the time pilot cutters were perhaps the most appropriate offshore raceboats in the UK as back to the mid-19th century they had become well-developed for speed and seakeeping ability as their crews raced out into the Western Approaches to be first to intercept ships that might wish to employ their services. But by the 1920s such competition had ceased just as their sailing pilot boats had been replaced by steam-powered alternatives.

American dominance would last for some time in the race’s early history: notably the back-to-back wins of Rod and Olin Stephens on Dorade in 1931-33, then similar consecutive victories of Richard Nye’s Carina in 1957-57 and Dick Carter’s Rabbit in 1965 and Red Rooster four years later.

While next year’s race will the 50th edition of the Rolex Fastnet Race, it is almost by luck that it nearly coincides with its 100th birthday (due to be celebrated in 2025 alongside the RORC’s centenary). The first editions of the race were held annually until 1931 when it adopted its present biennial arrangement, alternating with the Newport-Bermuda Race. The race did not take place over World War II but restarted in 1947, a decade before it became the decider for the first Admiral’s Cup between UK and USA teams (preceded by the Channel Race and the Royal Yacht Squadron’s Britannia Cup and New York Challenge Cup during Cowes Week). For the next four decades the Fastnet Race would become better known as part of what at the time was international grand prix yachting’s premier event, which peaked in the late 1970s when 19 three-boat teams regularly competed.

Sadly the decline in Admiral’s Cup participation as well as Fastnet Race fleet size (by then up to a staggering 303 yachts) coincided with the 1979 Fastnet disaster, which resulted in 19 deaths. Attempts to revive a flagging Admiral’s Cup saw the Fastnet Race dropped from it in 1999, before the event ended fully in 2002, but this enabled Rolex to step in as sponsor of the Fastnet Race from 2001 to this day.

It was not until 2011 that the Rolex Fastnet Race passed its previous record participation which has continued to grow rapidly since, reaching a record 388 in 2019. The RORC confidently expects it to exceed 400 for its special 50th edition in 2023. None of the other classic 600-mile offshore races come anywhere close to such numbers, which is at least in part thanks to the RORC’s early embrace of French professional classes such as the Ultims, IMOCA and Class40s which in 2021 added more than 50 boats to the main IRC fleet.

Meanwhile the race record to Plymouth has been whittled down with the Ultime trimaran Edmond de Rothschild reducing it to a mere 28 hours two minutes and 26 seconds.