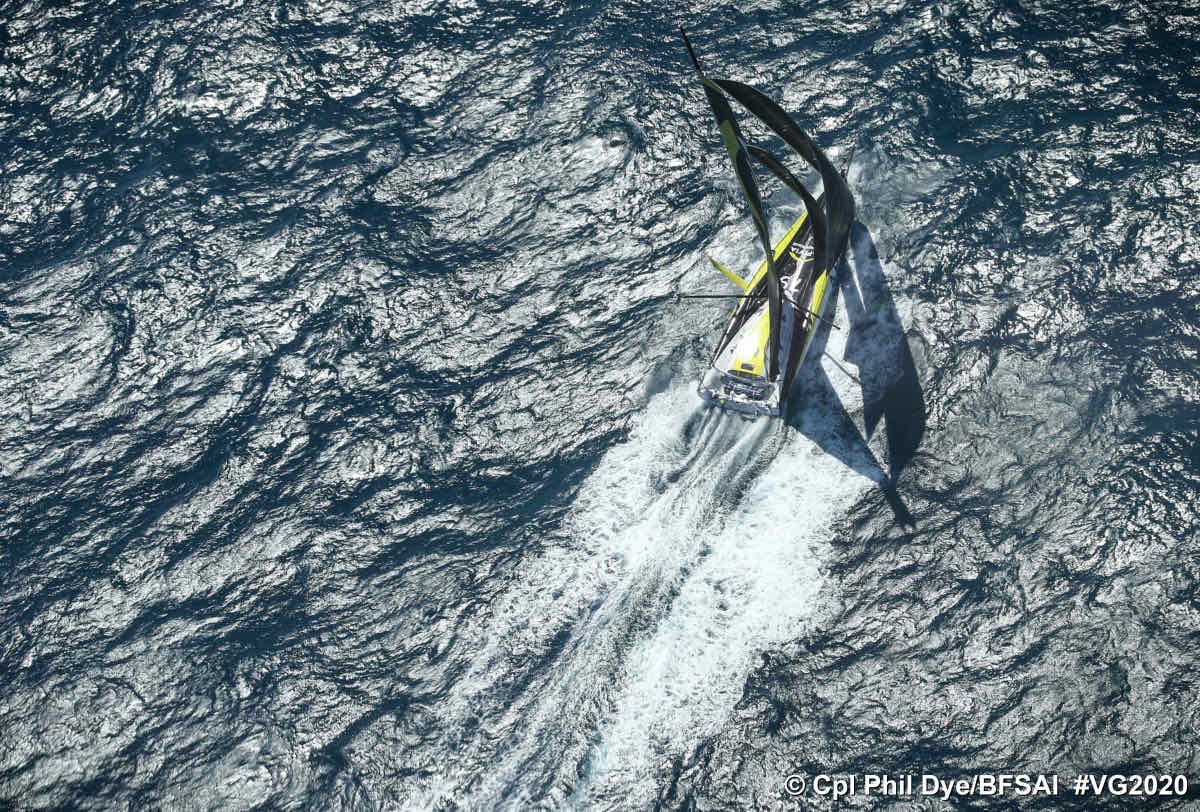 Vendee Globe skipper Conrad Colman weighs in with some expert analysis of the highly unusual solo racing scenario unfolding out on the North Atlantic this week as the leading pack start to tick down the final miles to the finish of their epic around-the-world marathon.

It’s Tuesday. Perhaps you disconnected from the Vendée globe over the weekend and then caught up with emails on Monday and are now looking at the tracker and are wondering how the race turned inside out, let me help you. Basically it’s all change at the front!

A week ago the fleet was at the latitude of Rio in Brazil. Yannick Bestaven’s multi-week charge in the lead was coming to an end.

In last week’s podcast we speculated as to what was going on with Yannick on Maitre Coq as he was bleeding miles and not being overly communicative. I said that losing the lead wasn’t his fault. He got stuck going through the light winds of the South Atlantic Convergence Zone and Charlie Dalin and Thomas Ruyant and the rest of the chasers we able to chose a different route that had more wind – a route that didn’t exist for Yannick given his initial lead.

Two things contributed to his further loses. His chosen gate northwards was more westerly than his competitors and he tried to sail closer to the wind and pinch them off, but they were faster and rolled over the top of him. Initially I though that this was only due to him sailing higher and slower, and and slightly less wind, but this week Yannick finally spoke up and announced his boat is far from 100%.

While rounding Cape Horn, his boat buried itself so hard into a wave that it ripped off his pulpit structure and damaged his furling drums for the forward sails. He didn’t explain to what degree his performance is compromised but only that he has limited use of his bigger sails.

Taken together, all these reasons certainly explain his tumble in the rankings for this plucky competitor who put on a masterclass in the wilds of the South Pacific and held out hope of an upset by a 2016 boat. 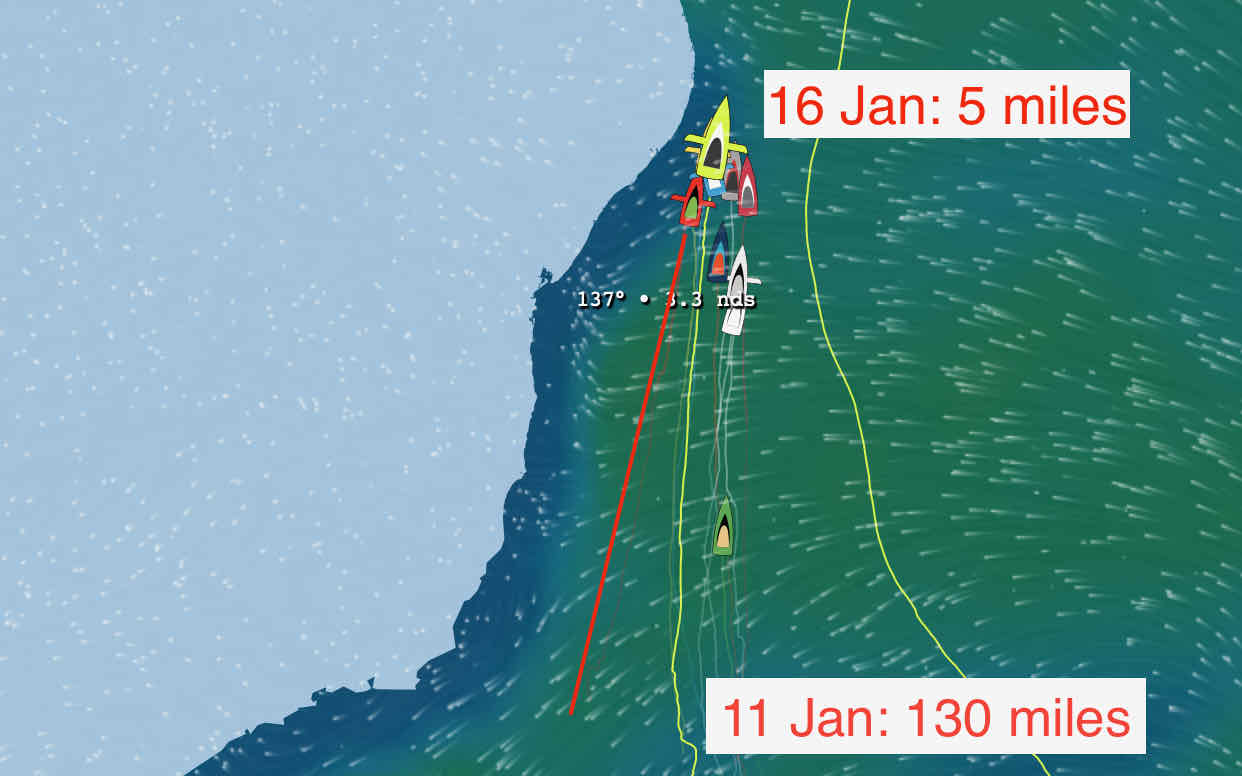 An upset that might still happen because as I write this Louis Burton holds a lead of 20 miles over Charlie Dalin. But the official rankings show Louis back in 4th, 115 odd miles behind. The answer lays in the point that is being used to calculate the rankings, and I think its now back in Les Sables d’Olonne given that Louis is so penalised and Damien Seguin is so favoured by his easterly position. 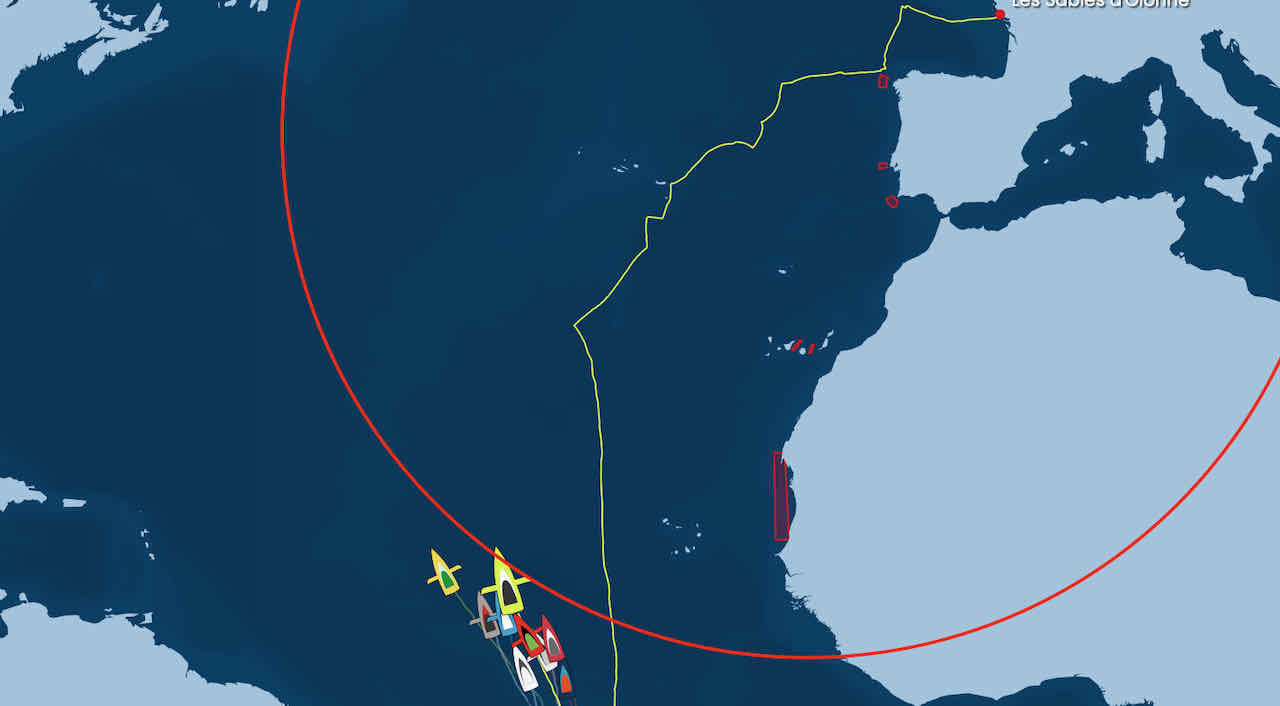 So if we forget about the current rankings as indicator of who is leading we need to instead focus on who the most likely candidate to make it to the weather system that will bring them home first?

At the moment there is a split between Louis Burton and Boris Herrmann (both with 2016 generation boats) and Charlie Dalin and Thomas Ruyant (2020 boats). Louis and Boris are currently sailing lower and faster than the others two and this could be down to the fact that both boats appear to be in top notch form in comparison with their newer, more fragile brethren who didn’t make it out of the south unscathed. Also, there more westerly position will be an advantage as this week unfurls. 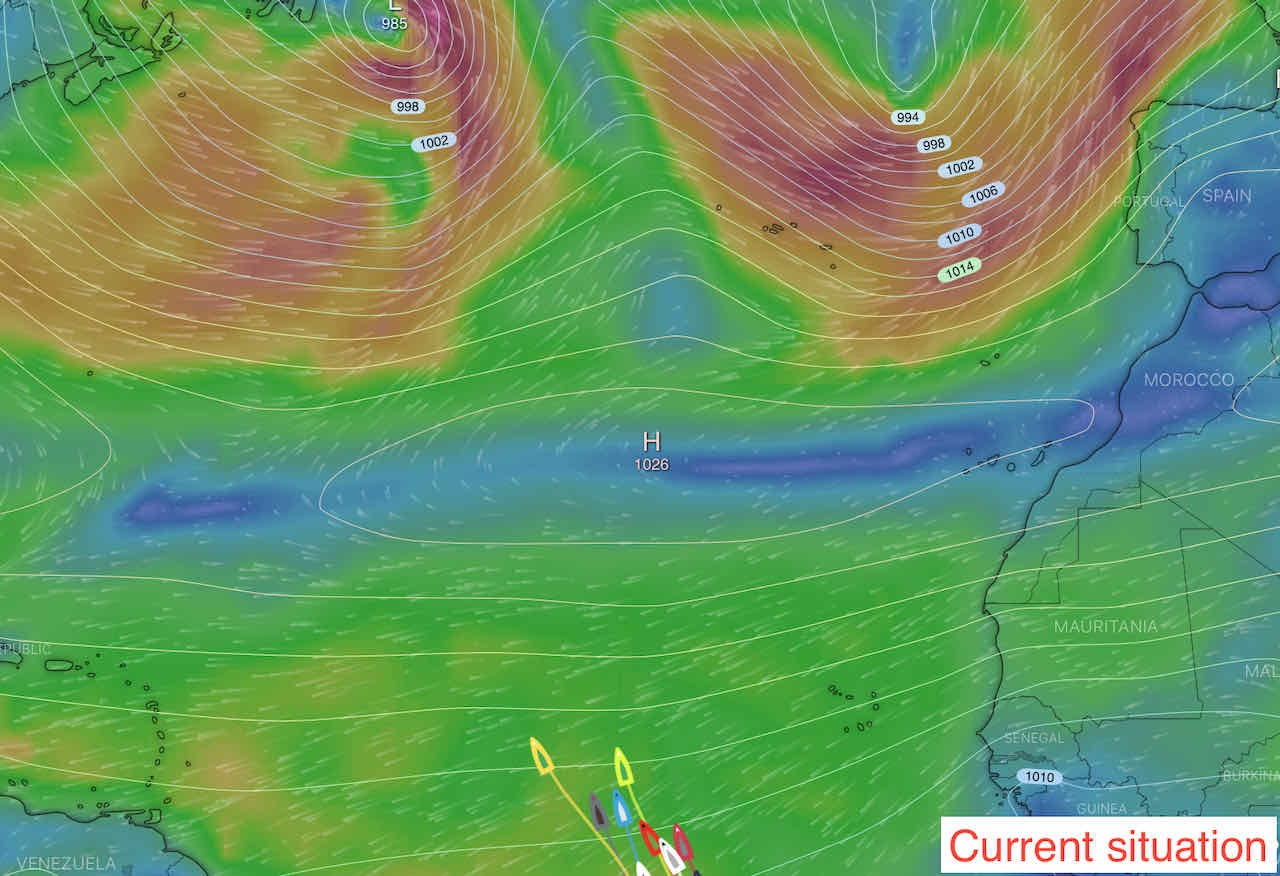 Looking ahead using the routing built into the windy.com plugin, the Azores high has been compressed by the strong depressions in the north and occupies a very southerly position, at the latitude of the Canaries. When passing the axis of the anticyclone, there will be more wind the further west you are but the real gains come later in the week. 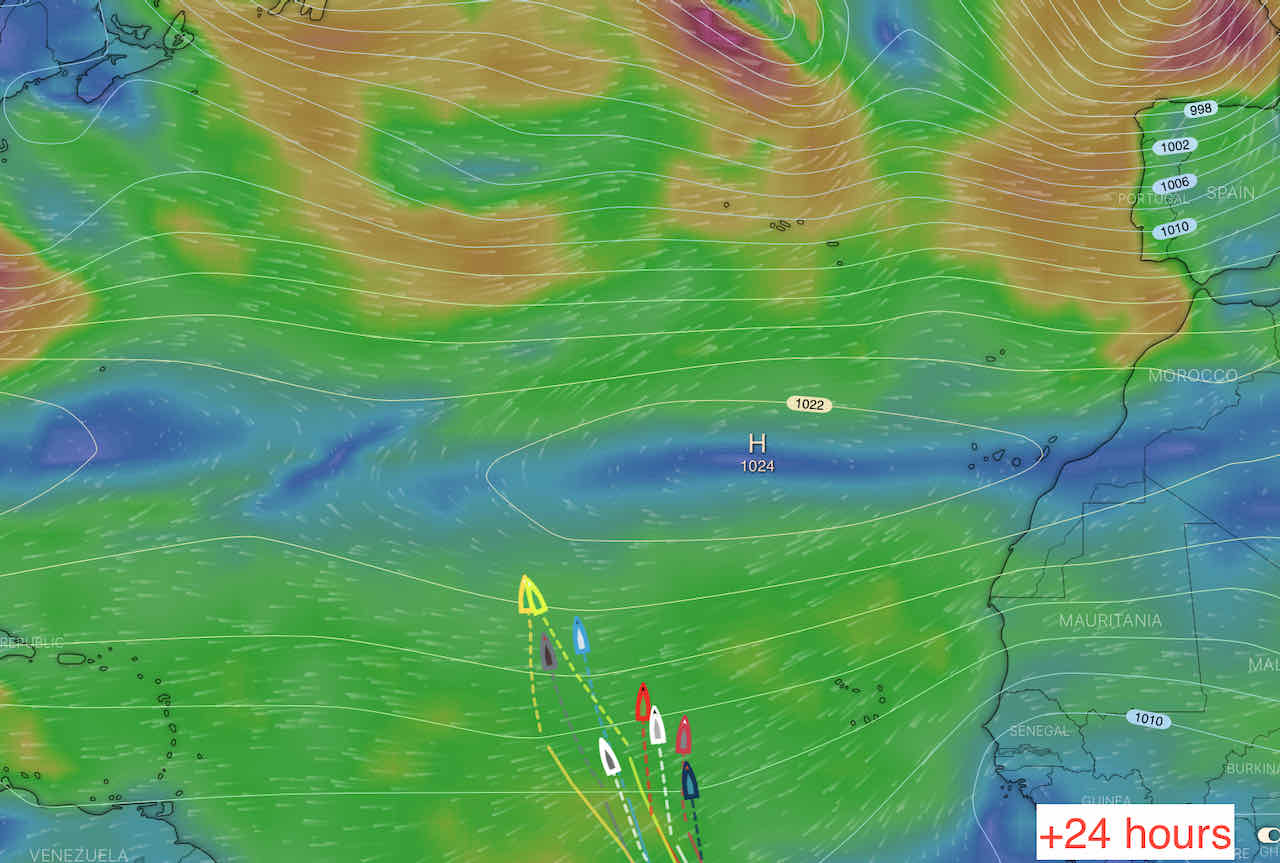 The real advantage in sailing fast and building a westerly position now is that you get the first bite at the new N-Atlantic depression on Thursday. Sailing in the corridor of wind between the depression and the anticyclone will lead to solid downwind sailing that will require a watchful eye on where to place the gybes in order to secure the best conditions and stay ahead of the competition.

More than any other time in this race, a blend of long term strategic planning and rapid fleet tactics will come into play and will certainly create an exciting end to this race that looks a lot more like the end of a Volvo Ocean Race leg than any edition of the Vendee Globe seen to date. 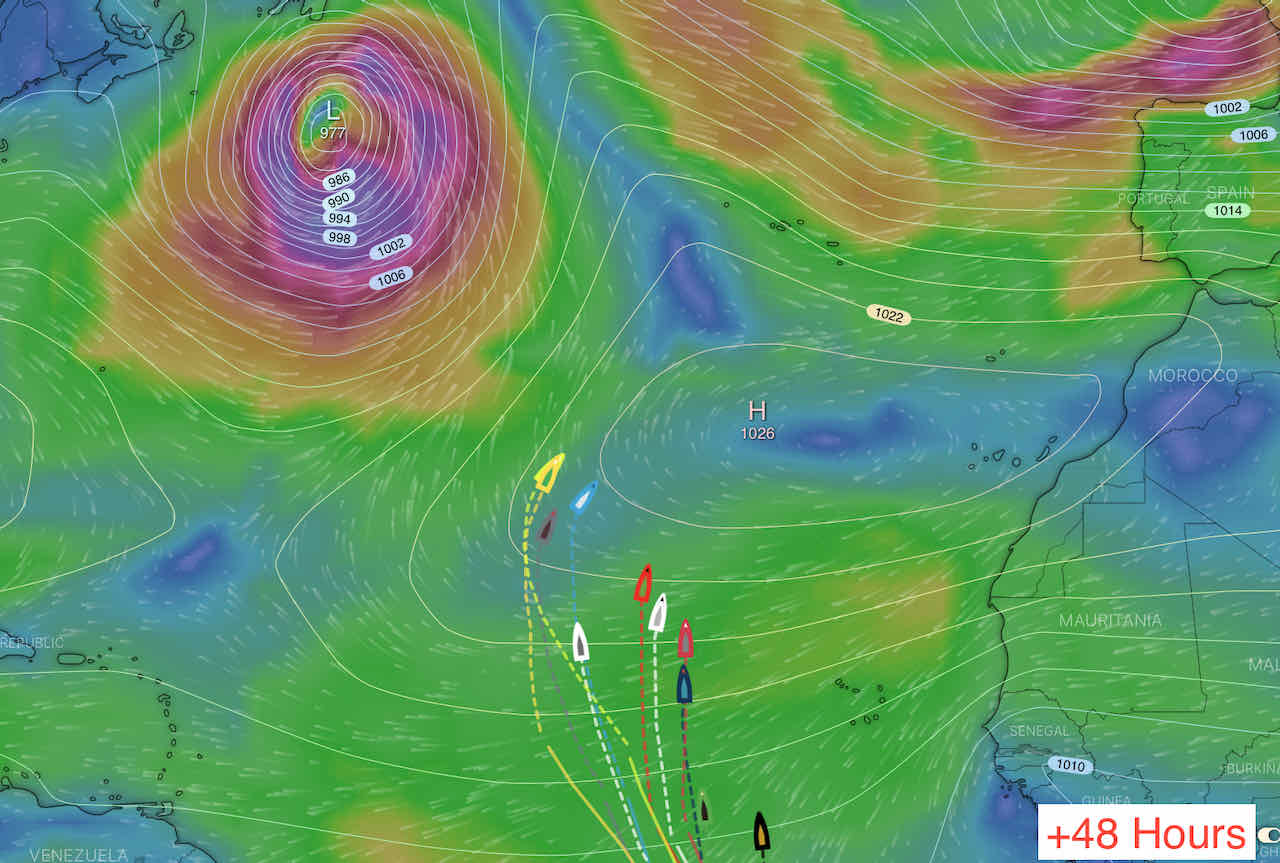 Even as the miles count down to the finish and some competitors start to warily think about actually making it home next week, don’t think for a second that this will be an easy run to the finish. Even as the sailors have secured their position is the trade winds, conditions are far from simple on board as Boris testifies in his latest video below.

More than any other sailor in the race I would like to salute Boris, and Will Harris who has been making strategy videos from home, for their immersive window into the challenges of racing the Vendée globe. In whatever of the three languages he speaks, he has always been unguarded and honest about his feelings, the ever-present stress of the race.

Even though he, and the leading pack are just days away from finishing, remember that there’s lots more action to come as Alexa Barrier and Ari Huusela are still in the Pacific and will round the Horn this weekend.