Skip to content
You are here
Home > Advertorial > Endless quest… 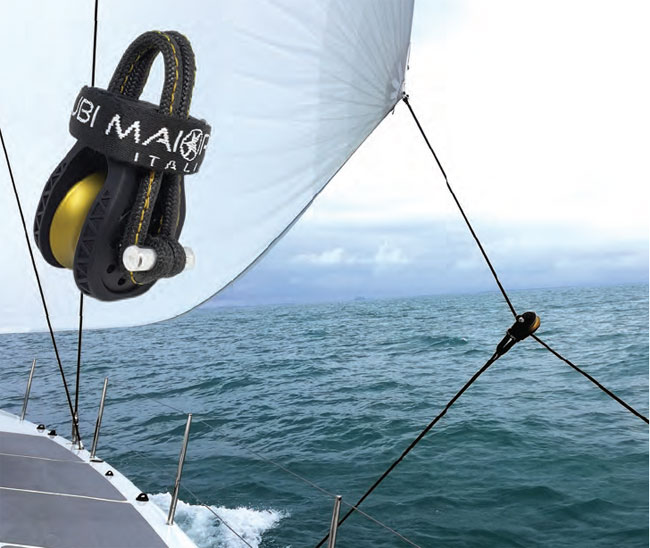 The young Italian engineers at UBI Maior are steadily working their way through pretty much everything that moves on a modern yacht – and working hard to make it move better.

This time it’s the snatch block. When it appeared decades ago, it seemed a magical device: with its opening cheeks to expose the sheave and rotating head, lines could now get redirected at any angle without having to be re-led from an end. Snatch blocks were a real boon for headsail and spinnaker sheets and invaluable for sail changes with their fast and easy attachment, loading and unloading, and release.

The original snatch blocks were heavy and cumbersome, built as they were from stainless or even bronze with thick, heavy cheek covers of rubber or plastic. The next generation saved weight with Delrin sheaves and lighter plastic cheeks reinforced with stainless straps, but these were not very strong compared with the main blocks designed to take the loads.

In the current generation these blocks have evolved further to have soft loops instead of metal shackles for attachment, and even loops to close the cheeks and capture the line. This generation is a fraction of the weight of the early models, and are generally stronger and more versatile.

However, even here the engineers at UBI Maior Italia have found room for improvement with innovations that are now available in their new X3M FLIGHT line of blocks. Their process of carefully analysing and defining the function of the block to its essential elements has led to a clever redesign that has led to broader applications elsewhere on deck.

The success of the design lies in not just its geometries but a careful choice of materials to maximise performance at minimal weight. The line load is centralised, thus releasing both the primary and the transverse loads on bearings made from a techno-polymer material called Ertalyte TX, which allows the block to withstand incredibly heavy loads (even static) with no roller or ball bearings to deform and no maintenance.

The unidirectional fibre-covered Dyneema loop acts on an aluminium T6068 alloy, holding the bearing in place. Some of the aluminium elements are silver ion-anodised to not only prevent corrosion, but also to reduce friction.

The body is fabricated by 3D-printing from a techno-polymer. This material has high flexural and tensile strength, stiffness and hardness, yet will not break when subjected to shock loading. This is an important feature needed in most high-load applications, and makes X3M FLIGHT blocks the first-ever built in production using 3D printing technology.

The central hub, where there is the bushing race, uses an innovative carbon coating called DLC. This coating is used in bike suspension to reduce the friction and also in this application allows the block to archive a 23 per cent higher max line speed even at high load.

UBI Maior Italia has for years been a pioneer in 3D printing fabrication for marine hardware, using this process to optimise the design and fabrication of custom, semi-custom and now even production products: for example, side cheeks for X3M FLIGHT blocks can be produced at a rate of 50 per working day.

The final components of X3M FLIGHT blocks are the Velcro strap to hold the loop in place and the captive titanium T-bone holding the side cheeks in place.

In testing for the past year on the 60ft canting-keeled raceboat Cippa Lippa, X3M FLIGHT blocks were used on the Code 0 and gennaker sheets, the latter sometimes running through the block during gybes at a rate of 3m/s – the block has been designed to not only reduce the sheave friction on the bushing with a graphite coating on the alloy axle, the frictional heat gets dissipated quickly too due to the sheave and cheek design.

Even the mainsheet on Cippa Lippa used a 50mm X3M FLIGHT block with a four-ton safe working load (SWL) that was probably subjected to more than four tons. This highlights another feature: the gold-coloured thread in the loop acts as a warning light. When the SWL is exceeded, this thread is severed.

X3M FLIGHT blocks are also used as halyard blocks at the mast base and to turn a 2:1 Code 0 halyard at the head of the sail where the block’s light weight and easy assembly makes a simpler life for the bowman.