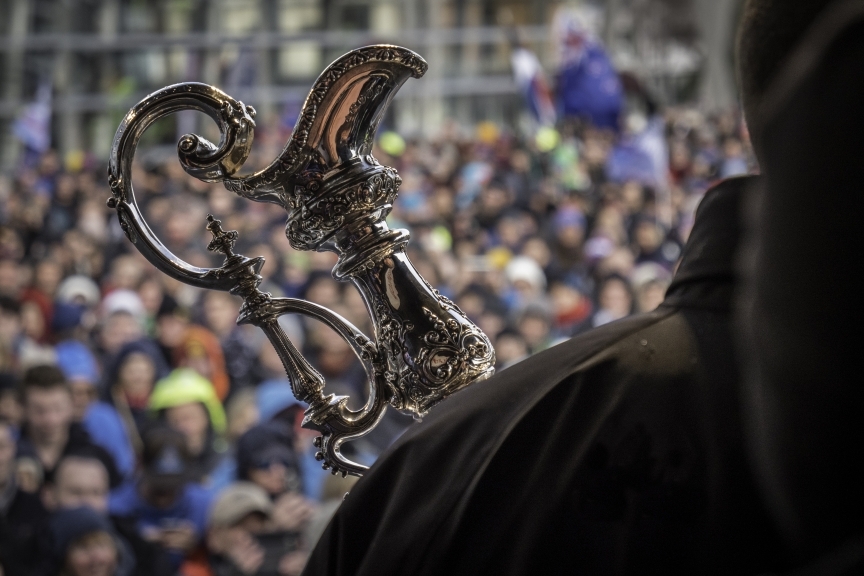 America’s Cup holders Emirates Team New Zealand have changed their minds about building a small-scale test version of the 75-foot foiling monohull the syndicate hopes will help them defend the Cup in Auckland in 2021.

Until recently the Kiwi team had planned not to mirror the strategy adopted by the two of the major challengers – INEOS Team UK, NYYC American Magic – of building a scaled-down test boat.

Instead the team had planned to rely on the use of a high-tech sailing simulator to enable the team gather vital testing data and in parallel to building the first of their two full-sized AC75 foiling monohulls.

Now however the team has revealed in an interview with New Zealand journalist Duncan Johnstone on the Stuff.co.nz website that they will be building a small test boat too.

Kevin Shoebridge, the team’s chief operating officer, told Johnstone that the year ahead would be one of the most important in the run-up to the 36th America’s Cup match which is scheduled to place in March 2021.

“This is a big year, one of the biggest for your learnings really,” he said.

“A lot of what you have learnt in 2019 on that first boat will go directly into your race boat. You often find in these things, a lot of the decisions that are made two years out are the decisions that will either win you or lose you the Cup – so we think this year is hugely important with the direction that we head.

“That’s everything really, not just the boat but the people that we have, how the organisation runs … that sort of stuff is going to be hugely important this year.”

The nine-month construction of the team’s first AC75 has been underway since late in 2018 meaning the America’s Cup defenders will be the first to launch and sail a full-sized Cup boat later this year.

However with the first of a series of America’s Cup World Series regattas taking place around the world beginning in Italy in October 2018 the team expects this first boat to be out of use a lot in 2020 as it is transported from venue to venue.

The circuit schedule has not been established yet but is likely to also include events in the United States, United Kingdom, and possibly even Malta and the Netherlands – given confirmed challenges from these countries.

That is why, Shoebridge says, the Kiwis have changed their minds and will now build a smaller test boat as an interim testing platform to try out new ideas and concepts for their second race boat first hand, rather than in the virtual digital world of the computer-controlled simulator.

“We are kind of keeping our powder dry with that (second) one and that’s one of the great things about having your own yard, you have the flexibility to move that (build and launch) date,” Shoebridge said.

“That’s where having a smaller test boat will come into its own, working away on tweaks in New Zealand gained from information off the first racing boat. It’s nice to be able to continue your development in the downtime … having the flexibility to do it at smaller scale is helpful.”

Shoebridge also revealed in the interview that the team was not in a rush to fill the final spots in its sailing team line-up. Right now just a core of sailors including helmsman Peter Burling, flight controller Blair Tuke, and wing trimmer Glenn Ashby have been retained.

With a crew of 11 people expected to be required to manage the radical flying AC75 yacht, Shoebridge said the New Zealand team was planning to hire up to 16 sailors to make up its squad.

“We have been careful not to jump too quickly because we are not 100 per cent sure what the requirements of the new boat are,” Shoebridge said. “We want to be very specific about picking the right people for the right roles once we figure out what the roles are on that boat.”