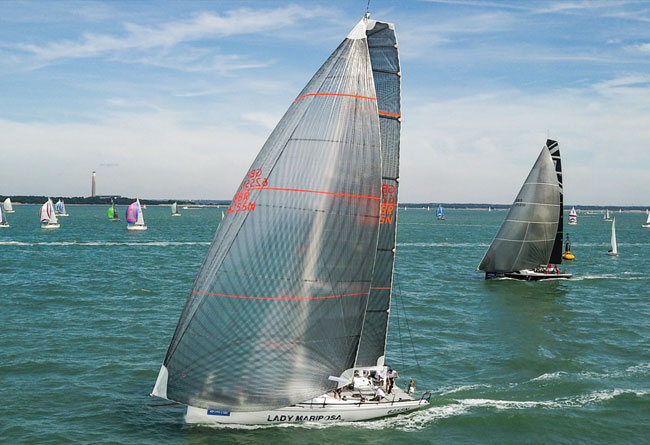 Chris Dickson was actually there first, with a huge sacrificial leech on the ‘upwind spinnaker’ used by his 1993 Whitbread entry Tokio – but it was Paul Cayard’s EF Language team who developed it into the modern Code Zero.

For 20 years Elvstrøm Sails has been steadily refining its ideas for Code Zero development alongside the advances in design and fabrication. Most recently, Elvstrøm Sails’ EPEX Technology of precisely matching film and fibre has been particularly useful for engineering these sails due to their complex shapes and load characteristics.

In fact, it is this technology that has enabled the development of the cable-free code sail, where the cable is replaced by load-bearing fibre passes in the luff section. This has been vitally important in Elvstrøm Sails’ clever way of working around the restrictions on minimum mid-girth dimensions imposed by the rating rule authorities, who seek to define these sails as spinnakers.

For IRC this is 75 per cent and DH in Denmark at 65 per cent, which makes it difficult to have an effective flying shape for a sail this big without having too much roach on the leech. [ORC rates these sails in a separate category, calling them headsails set flying, where there is a more flexible 55 per cent mid-girth minimum].

Elvstrøm Sails’ solution is to not rely on a tight luff cable, but to design the sail with a large positive luff curve with no cable. This moves the roach from leech to luff, allowing more of the sail area to work and a cleaner exit flow off the leech. Stability in the mould shape is provided by precise alignment of fibres in the EPEX membrane to carry loads not just on the luff but throughout the structure over a wide range of wind angles.

‘This positive luff curve increases the range of angles at which this sail is effective,’ says Jesper Bank, Olympic gold medalist in the Soling at Barcelona 1992 and Sydney 2000, Louis Vuitton Cup helmsman for Victory Challenge in 2003 and United Internet Team Germany in 2007, and more recently the commercial director of Elvstrøm Sails.

‘And because the luff loads are not as high as on cable-luffed sails, the weight and equipment needed to accommodate those loads are not necessary, so there’s less concern about reinforcing the boat, the bowsprit and the spar.’

Already, Elvstrøm Sails’ cable-less Code Zeros are appearing on a wide variety of racing and racer/cruiser boats, and with great results: in the 2018 RORC season the Ker 46 Lady Mariposa posted overall wins in both the Myth of Malham and Cherbourg races, and an impressive head-to-head showing against another well-sailed Ker 46 in the North Sea Race.

This race consisted of sailing 70 per cent upwind and 30 per cent reaching in varying sea states, in five to 15 knots true wind speed. According to a thorough KND postrace analysis of the performance data, in one 44-mile reaching leg sailed in 12-14 knots at 85-100° true wind angle, the cable-free Code Zero was able to meet and exceed polars despite a confused sea state.

And on the final six-mile leg sailed in only eight knots at 95° in flat water, polars were exceeded by five per cent. Not that it mattered that much, as the competition was about 45 minutes astern.

‘I think besides good speed, the major advantage on the long reaching leg was the fact that Lady Mariposa was able to hoist the cable-free Zero and scoot off,’ said navigator Marcel Korte. ‘[Our rivals] were not able to hold their traditional Zero at such high angles. They had to peel to their Jib Top and were not able to match the pace.’

The advent of the so-called Code Zero is normally attributed to that large, clever headsail design debuted by the winning EF Language team in the1997-98 Whitbread Round the World Race.

While many know the story of EF’s success, what many don’t know is that at the same time – quietly and well away from the cutting edge – a similar development was being made for a popular club racing scene in Denmark by a Soling gold medalist and a sailmaking friend who together came up with a similar sail, with similarly devastating results.

‘We were having a good time sailing locally in a 34ft boat of mine that we kept trying to supercharge with more and more sail area to get through the typical light air of these races,’ says Bank.

‘Jesper had this idea of building a Code Zero, which was just the talk of the very elite of sailing in those days,’ says Jesper’s pal Ken Madsen of Dimension-Polyant. ‘Not many knew what such a sail would even look like and for sure no real sailcloth existed for it, but Jesper and I found some rolls of WS 3.0 yellow, a light film/ scrim/film laminate, in the D-P warehouse in Copenhagen.

‘From this we built what I think was the first Code Zero sail in Denmark for racing around Fyn. We were in a class of boats with hiking wings – all sorts of extreme sailing boats (for the time). We were lucky that we could fly that sail for 40 per cent of the 137- mile race around the island, which gave us a first in class. If I recall correctly, we were third to finish among some much bigger boats. It was fun to be at the leading edge!’