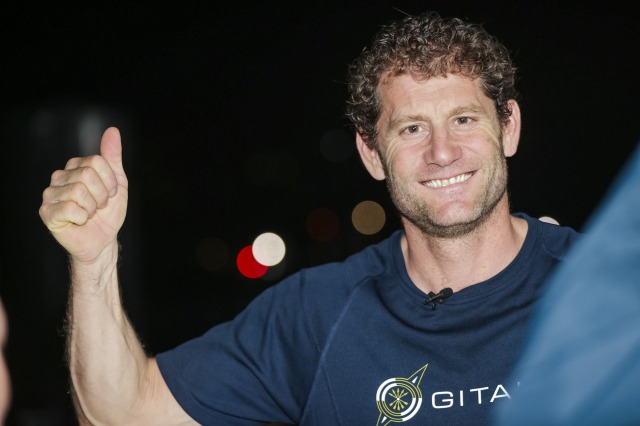 French solo skipper Charles Caudrelier aboard the Gitana Team Maxi Edmond de Rothschild has won the Ultim division of the Route du Rhum singlehanded transatlantic race in a new record time for the 3,542-nautical mile course from St Malo in northern France to Pointe-a-Pitre in Guadeloupe.

Caudrelier, who had been in the controlling position over his closest rivals – François Gabart on SVR Lazartigue and Thomas Coville on Sodebo – since the start last Wednesday in St Malo – crossed the finish line just after five AM today local time in Guadeloupe, setting a new reference time for the course of six days, 19 hours, 47 minutes and 25 seconds.

Gabart was second to finish – crossing the line three and a quarter hours after Caudrelier to take his second consecutive runners-up position in the Route du Rhum.

Despite his blisteringly fast Atlantic crossing – which beats the previous record set by Francis Joyon on IDEC Sport in 2018 by more than 18 and a half hours – Caudelier declared himself to be feeling fresh.

“I am not even tired,” he said in an emotional speech on the dock in Pointe-a-Pitre after finishing.

“The first 24 hours were hard. I so wanted to win the race for the team. I’ve been dreaming of it since I was young. It’s for the family Rothschild. It seemed like a crazy idea, building a boat that could fly. It’s for Franck Cammas, as he had the experience – without him I wouldn’t be here. He left me the place for the Rhum. He could have won it himself. It’s a Formula 1 team and I just drive in the race. This is a team effort and there’s also Guillaume Verdier, the designer. I recently lost my mother and she isn’t here to share this moment. Thanks to everyone for believing in me.”