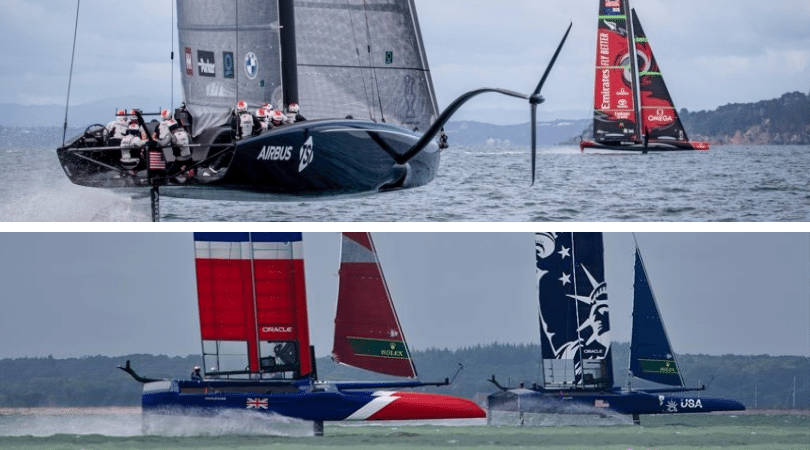 Yacht Racing Life editor Justin Chisholm indulges in some well-meaning speculation over how the future relationship between professional sailing’s two major inshore sporting properties – the America’s Cup and SailGP – might play out.

In the week that the first event of the 36th America’s Cup is about to take place, one of the three challenging yacht clubs apparently has had a weather eye on how the future of sailing’s oldest and most prestigious competition might look.

According to a report by the Associated Press’ veteran America’s Cup reporter Bernie Wilson, the New York Yacht Club hosted a Zoom call involving some 30 yacht clubs and stakeholders on Monday to “discuss ways to try to achieve more continuity in a competition that has changed dramatically since 1983”.

NYYC members and America’s Cup aficionados around the world will know all too well that was the year that John Bertrand’s Australia II crew staged a legendary come back in the 25th America’s Cup final against the NYYC’s Dennis Conner on Liberty to end the club’s unparalleled 132-year winning streak.

It surely cannot have come as much of a surprise that at the top of the list of issues raised on the two-hour call were the high cost of participation – each of the teams this time around is expected to spend upwards of $100 million – as well as the steady drop over recent cycles in the number of syndicates able to raise the funds to mount a challenge.

“The stakeholders in general believe the cost of the America’s Cup prohibit the future growth of the Cup,” said Christopher Culver, who became the NYYC’s commodore just days before the call. “We’re looking to create an opportunity and a dialogue where we can reduce the cost to increase greater participation,” he said.

According to Wilson’s AP article a budget cap set at $50 million was apparently also discussed, but with no details of how such budget limitations would be enforced. Given that America’s Cup teams shroud themselves in secrecy about virtually everything they do, for fear of giving away competitive advantage, it is hard to foresee how this could work in practice.

Also flagged on the call as an issue was the concept laid down in the 19th Century America’s Cup Deed of Gift that it is the winner that decides the location and class of boat for the next edition. The undeniable problem here is that there are often multi-year gaps between cycles which inevitably result in a drop on the event’s global media profile.

Added to that, the uncertainty each edition over whether a new boat will be introduced makes life hard for syndicates and their backers to commit to more than one cycle. Once again though, it is hard to imagine anyone gaining sufficient consensus to overturn such a fundamental element of the 170-year-old competition.

This week’s ACWS Auckland and Christmas Cup events are the first official AC racing since the last race of the 35th edition in Bermuda in June 26, 2017 when Emirates Team New Zealand sealed its victory over Oracle Team USA – a gap of three and a half years.

Raced in equalised versions of the 35th Americas’ Cup AC50 catamarans and open by invitation-only to top flight international teams requiring comparatively diminutive operating budgets, SailGP is to all intents and purposes what the collective of competing teams at AC35 in Bermuda – notably except for Emirates Team New Zealand – wanted the America’s Cup to evolve into.

It is no real coincidence then that the 2021 SailGP season will see three out of the four helmsmen from the 36th America’s Cup: New Zealand’s Peter Burling, naturalised American Jimmy Spithill, and Britain’s Ben Ainslie, all joining former America’s Cup leading lights Tom Slingsby and Nathan Outteridge, on the SailGP circuit next year.

Is it a massive stretch to think that having so many top name skippers with a foot in both camps might lead to these two independent sports properties operating in tandem to each other rather than as competitors?

Could SailGP offer prospective America’s Cup teams the regular season-by season racing – at achievable annual campaign budgets – that would keep both fans and sponsors happy  in between Cup cycles?

Equally, surely six or eight well-funded AC syndicates committing to multiyear deals with SailGP would would be an appealing prospect for Ellison who has bank-rolled the circuit since its inception in October 2018?

Meanwhile the America’s Cup could stick to its four year design and build cycle, happy in the knowledge that it had a healthy batch of prospective Challengers being nurtured in the SailGP incubator.

At this stage of course I/we can only speculate on what the future might hold. There would be plenty of  hurdles to overcome and egos to massage along the way to achieve the sort of cooperative relationship I’m suggesting – but there is no denying it is a tantalising prospect, nevertheless.