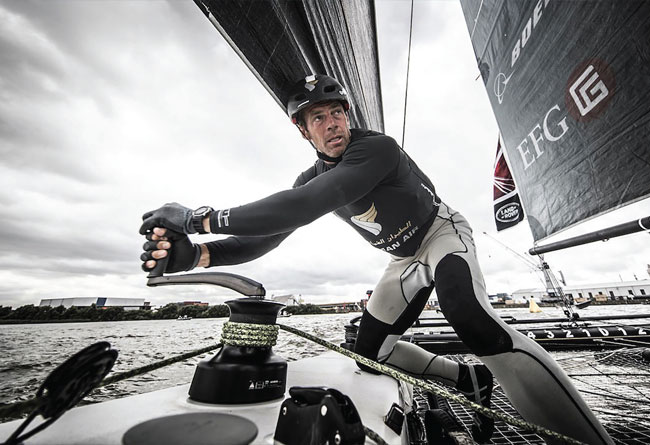 Things were already changing at Doyle Sails before the company’s new CEO stepped aboard. But when Mike Sanderson took on the role at the New Zealand-based global sailmaker business, the pace ramped up even further. For Sanderson, one of the main changes and the clear key to future success lay with people.

‘I have always believed fast people make fast boats,’ he explains. ‘Good ideas come from good guys. When some of these new people came on board, they cautioned me that they were not salesmen. But that was exactly why I was talking to them. They had hands-on experience. They know what you need to win campaigns, about managing budgets, about building sails that will last and be race-fast for a long time. I didn’t want them to be salesmen, I wanted them to be experts.’

And experts is precisely what he has got in the trio that has recently been announced as heading up the latest new loft in the Doyle Sails group. Based at Universal Shipyard on the River Hamble, UK, Brian Thompson, Peter Greenhalgh and Adrian Stead will need little, if any, introduction to their clients. Each of them has an impressively long list of successes across many different areas of the sport.

Brian Thompson has been one of the world’s most accomplished longdistance racers with four non-stop circumnavigations including a Jules Verne Trophy win and a Vendée Globe under his belt.

Peter Greenhalgh has also spent a great deal of time aboard high-speed multihulls and is the most successful sailor in the Extreme Sailing Series. In 10 years his worst season finish was third, every other time he has either won or finished second. He is also a past master in one-design classes and is one of the most sought-after trimmers in the racing scene aboard grand prix racing boats including Mini Maxi 72s, Fast40+, TP52s, D35s and MOD70s.

Adrian Stead also has an impressive track record that includes 14 world championship titles with teams such as RAN, Bella Mente, Mascalzone Latino and Quantum Racing. The two-time Olympian and America’s Cup sailor also has an Admirals’ Cup victory and many offshore race wins to his credit including a Middle Sea Race, two overall victories in the Fastnet and four wins at the Caribbean 600, providing a snapshot of the level of his success.

While each of the three brings a particular set of skills to the company, the overlap in their knowledge and skills generates even greater benefits and ensures a good transfer of information, both across the business and to clients and their racing teams.

‘One of my main areas of expertise is in sailing at high apparent wind speeds where the breeze is usually well forward of the beam,’ says Greenhalgh. ‘So I’m very used to working with sails that are designed to cater for that. My experience aboard one-designs also means that I’m very used to trimming these kinds of sails and understanding what it takes to achieve the right sail to deliver the right performance.’

‘Boats are generally getting faster which means that new techniques are required to get the best out of them and a good deal of this learning is coming from faster boats in the sport. It doesn’t matter whether it’s a Fast40+ with a code zero or the kind of multihulls that I’ve been sailing, the knowledge required to improve performance in either case is what I can deliver’.

New technology is playing a big part in the change as well.

Thompson’s world has also revolved around high-performance multihulls, but for him the lessons have often been learned in some of the most remote and challenging places on earth. Yet still he believes that the intelligence from extreme multihull projects such as the Ultime class and the MOD70s have a big effect elsewhere in the sport.

‘It’s true that the big multihulls are at the extreme end, but the information is definitely filtering down into the more mainstream areas of the sport,’ he says. ‘The Gunboats and the Outremers are two examples of performance cruisers that have benefitted from some of the lessons that have been learned aboard the bigger boats. And it won’t stop with these boats, this is just the start.’

‘The fact is that it is now possible to achieve the same kind of speeds as a Mini Maxi aboard a cruising cat with loads of accommodation, so there’s plenty of interest from owners to move towards these types of boats.’

Among the new technology that is helping to fuel this performance improvement is Doyle’s cable-less system. An approach that is already benefitting a huge range of racing boats, and is now working its way into other areas of the sport.

‘Cable-less sails are big news in the multihull scene. They work well with boats that typically have luff sag, especially those that don’t have running backstays to straighten the luff,’ he continues. ‘They allow you to have a straight luff without having to load up the sail or indeed the boat. So this is a system that is particularly good for performance cruising cats.’

‘Even on those boats with runners, the loads are reduced significantly. On the supermaxi Comanche, the cable-less jib saw the runner loads go from 25 tonnes to 17 tonnes, which is a huge reduction.’

The ability to reduce running backstay loads has a knock-on effect elsewhere that is particularly relevant to monohulls. Reducing the compression in the mast helps to keep the mast in column. From here, masts can be made lighter which then means less weight in the keel bulb, which in turn reduces the loads and so the cycle continues.

And when it comes to the practicalities during racing, there are even more advantages, as Adrian Stead explains.

‘The cable-less concept is exceptional,’ he says. ‘Over the last four years, the Mini Maxi Worlds have been won by boats using cable-less sails. The Fast 40+ Ran has also used this technology very effectively with a masthead zero and staysails. The zero on Ran is a good example of the benefits from this type of sail.’

‘Because the Fast40+ class has a mixture of windward/leeward, coastal and around-the-cans racing, we knew we needed a versatile code zero. On Ran we have a sheave cage fitted at the 7/8th position on the mast, in other words in between the hounds and the topmast. This makes it easy to peel because it is below the spinnaker halyard exit. But the really key thing is that this is a sail that has a range from five to 20kts true so it’s not a specialist sail, but an all-round code zero,’ he says. ‘Aside from being a good flying shape, you have less weight when it’s flying out to leeward and in front of the boat. You’re also not carrying as much weight in the boat when it’s down below. The bottom line is that it’s a very efficient sail.’

Aside from being a successful professional sailor, Stead’s background also allows him to look at sailing programmes from a practical point of view.

‘My chartered accountancy background has often seen me in positions in a team where I am holding the purse strings, so I’m very aware of the considerations involved and balances that are required to get the best value for money in a campaign,’ he says.

‘It’s not unusual to come across amateur teams that are prepared to spend a serious amount of money for their season’s racing, which often involves a big spend when it comes to getting to an event. But having committed to doing an overseas event, they don’t invest in the right sails for the job, or rely on old, outdated and poorly maintained sails. To blow out an old sail on the way to the start, or not have the right one for the job, risks wasting the time and money that was spent on the campaign.’

‘So, for example, getting a proper heavy weather jib and looking after it will pay dividends in the long term. Whatever the budget, planning is at the heart of a good campaign and that’s what we’re here to help with, as well as providing fast sails.’

The trio’s experience and knowledge is clearly a big asset for the company, much of it gained on the international racing circuit. But why the move to develop a UK base?

‘The Solent is still a key centre for grand prix racing and London remains such a big part of the racing scene when it comes to the participants,’ says Greenhalgh. ‘Today, many owners are sailing a much wider range of boats than before, which could be anything from superyachts to quarter tonners, so support is a big part of what we offer and with our large, purpose-built facility on the Hamble we can deliver that support.’

But if the trio’s sailing CVs and longlist of victories still doesn’t say enough about their commitment to the future of Doyle Sails, the fact that they have each made investments in the ownership of the company is a further and unequivocal demonstration of their determination to succeed.