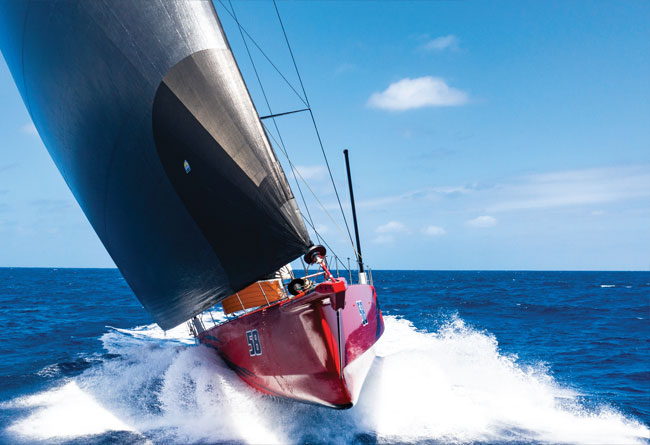 Boxing Day 2018 marked the start of a pretty good story for the latest Doyle Sails technology. The 2018 Rolex Sydney-Hobart race brought together some of the finest offshore sailors on the planet. Four 100ft Maxis raced to Hobart, with two of these plus the overall winner, the Reichel/Pugh 66 Alive, all flying Doyle Stratis sails.

This was a key opportunity for multiple world champion, double Olympian and sixtime Volvo veteran Chris Nicholson from Doyle Lake Macquarie to gauge the response, from the talent gathered in Hobart, on the innovations and key developments emerging from Doyle in 2018-19.

‘Two of the 100-footers developed a J-Zero, similar to the Volvo 65 sail, and so now we are seeing that information trickle down from the Volvo Ocean Race to mainstream offshore racing, which is great,’ Nicholson said.

‘Normally the J-Zeros are set on a reaching strut, but with the conditions in the recent Hobart, the struts weren’t in range to be used – and still the gains with the luff of the J-Zero projecting so much enabled for a much faster triple head setup. With two inner jibs or staysails flying, the gains have really been impressive.’

‘Both Comanche and InfoTrack raced with cable-less sails, plus Comanche raced south with a Doyle mainsail. The feedback from the guys on board confirmed that a significant weight gain on all the sails, especially the mainsail had been achieved.

‘The extensive design work on all the sails’ elongation numbers was absolutely spot on, confirmed by it all matching the rig setup so well. Comanche also had a cable-less furling J1, J-Zero and A3 – which, to be honest is quite a ground-breaking sail on a furler, making this massive sail highly manageable for the crew.

‘All of this with literally no sag in the luff sideways and flying positively forward from a projection standpoint, for a huge increase in driving force. Then on InfoTrack we had a cable-less masthead Zero, J-Zero, storm jib, J5 and an A2 cable-less Stratis sail, which was bigger again than Comanche’s,’ he adds.

With inshore and offshore teams around the world continuing to focus on reducing weight in all areas of rig, sails and hull structure, the response from Comanche’s owner, Jim Cooney, summarising the improvements in their inventory was extremely positive.

‘The Doyle big jibs and A3 are very powerful and yet significantly lighter than I ever expected, increasing acceleration with our greater righting moment available. The sails’ ability to hold their shape at all angles with virtually no luff sag is astounding in such big sails. We have reduced rig load dramatically with these cableless sails, and our performance has improved in all conditions, particularly in light air. Our new Doyle mainsail is exceptionally high quality and the reduction in permanent weight aloft gives immediate gains in all conditions. Comanche has been able to realise more of her potential with the addition of Doyle’s cable-less sails and I recommend this exciting technology for any size of boat.’

The 2018 Hobart race featured lighter conditions than normal for the front end of the fleet, which saw the big boats match-race each other to the mouth of the Derwent, with just under 15 minutes separating the four Maxis after 628 miles of racing. One of the key performances of the 2018 Hobart race was aboard InfoTrack, with improved light air and VMG running by using their A2 laminate Stratis sail for 95 per cent of the race, performing superbly in a range of true wind speedfrom eight to 32 knots, where it furled easily, proving a highly controllable sail in over 30 knots true. Racing aboard InfoTrack was Stu Bannatyne on his 12th Hobart race, who commented on the set-up.

‘Sailing upwind with the Doyle masthead Zero you could see the luff the whole way, it simply doesn’t shake or flutter at all, it just sits there in a straight line in front of the forestay – and to be honest, guys are simply not used to seeing that, so this feedback from the owner and crew on their observations is pretty powerful.

The trimmers and drivers see this very quickly but probably the first guy to notice is the person in the pit, who doesn’t have to load up the tack line so much; as soon as these sails unfurl, everyone gets to see the benefits of the luff projecting and it’s easy to understand why that’s faster. It’s a game changer really, just remarkable.’

Looking further back in 2018, for Alex Thompson on Hugo Boss during the Route du Rhum, it was clear that racing with less sag in the cable-less sails provided him with a real performance gain, allowing Alex to perform better in such a broad range of tough conditions. And with reduced weight and improved durability critical to the next Vendée Globe plus the Ocean Race 65s and Ocean 60s – the two classes in the next edition of the Volvo Ocean Race – this will be hyper-critical on the foiling Ocean 60s. Defining the structure early for the loads on the fully crewed foiling Ocean 60 will be pivotal to the overall design, and so immediately the cable-less sails lend themselves to the equation. With the performance gain on the sail itself, let alone what it means for the rig compression due to the lower tack and head loads, there is no doubt that it will be a big deal.

Chris Nicholson is perfectly placed to understand the demands placed on both sailors and equipment from this foiling technology. ‘These foiling boats have such tight apparent wind angles, they really need to have these straight luffed sails,’ he says. ‘And if you can achieve that straight luff without the massive loads on the structure, there are obviously huge weight savings in key areas of the boat and rig. This is true for all boats, but a particually big deal for the foiling Ocean 60s. The benefits apply across the board, be it a superyacht or a 16ft skiff; if you reduce the tack loads you don’t need that additional structure. And if you are foiling – or considering foiling – then engage us in that conversation and you will rapidly see the benefits.

‘Moving into 2019 and beyond, with all projects including the Ocean Race campaigns, people aren’t just looking to next season, but two or three years in front – or further if it is a multi-race campaign. In these situations, it’s clear that people will be drawn towards these sails, particularly after talking with individuals and teams who have used Doyle’s sails and having received honest feedback.

‘That is the true test of any product out there in the marketplace: have the conversation with people who have used these sails, then get their response on shape, weight saving and durability, which have been extensively proven in campaigns such as Alex Thompson’s Hugo Boss. Then come and talk to our team about how we can improve your overall performance, by offering you more weight saving, more resilience in shape, more performance and more durability – for less.’