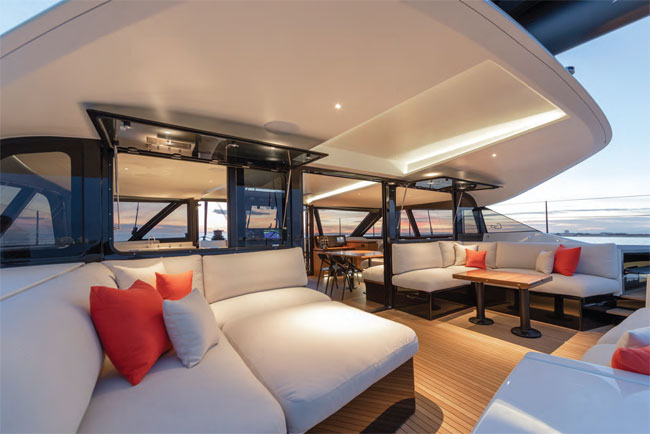 What sort of boat does a high-performance sailing connoisseur choose when it’s time to go cruising? Gunboat’s mission is to fill that particular niche; it drove the luxury performance segment of the multihull market and has raised the bar significantly with its latest model, the Gunboat 68.

The owner of the third 68 launched is an international businessman with a wealth of offshore and inshore racing experience including the Mini- Transat and Solitaire du Figaro, six Bol d’Or wins and two M2 Speed Tour victories on Lake Geneva, plus recent forays into foiling multihull racing in the Flying Phantom Ultimate and A-Cat classes.

He also runs and manages Team Tilt, a Swiss sailing squad with current Olympic and GC32 campaigns. For a sailor of this calibre, even in long-distance cruising mode, a full carbon rocket ship is required.

It’s easy to gauge the success of a straight-up racing catamaran: it’s all about boat speed and regatta results. It’s more complex for a semi-custom cruiser-racer. Speed and wins are obviously important but there’s a wide range of other considerations, one of which is the versatility of the platform. That’s why Gunboat puts so much emphasis on getting the key design and engineering decisions absolutely right at the start of the development process for a new model.

For the 68, Gunboat created a series of tightly interwoven design loops involving its own build team, naval architects VPLP, designers Patrick Le Quément and Christophe Chedal Anglay, and key external suppliers. Rather than designing in the usual broad strokes, the designers were asked to work with far greater attention to detail, creating exact 3D models of everything. All equipment and systems were ideally positioned and fully integrated, all cable runs were optimally routed and two fully engineered rig packages were created before the build of the first boat began.

The hull structure is designed to handle the differently distributed tack and halyard loads of both rig packages, using either cabled or cable-less sails to give owners a lot of flexibility. And so on, with unusual attention to every detail. The result is a remarkably versatile platform that allows buyers to place the cursor precisely where they want it in terms of performance, complexity, comfort and luxury while retaining the reliability and efficiency of a semicustom build.

The first three owners took this versatility in different directions: 6801 is the ultimate grand tourer with all performance, equipment and luxury options ticked; 6802 is a pure performance cruiser; and 6803 is a racing sailor’s idea of the ideal cruiser, built and fitted out with a greater focus on weight saving than the previous two. Gunboat’s chief operating officer William Jelbert manages this process with a focus on weight savings and build quality that’s on par with the best grand prix race builds.

‘Whenever we discussed an option with the owner of 6803, he wanted to know how much it would weigh,’ Jelbert says. ‘We avoided the weight of a genset by using maximum solar and regeneration instead, feeding the latest generation of batteries.’

Gunboat has created a tool to help owners evaluate various features of the boat, their impact on energy requirements in different scenarios (sailing, at anchor and so on), and make educated decisions on amenities, systems design and redundancy. More weight was saved through smart decisions by the owner, such as fitting air conditioning in the hulls but not in the bridge deck (which already has very good ventilation) and not installing a dishwasher.

Another smart decision by the owner of 6803 was to make the huge expanse of trampolines configurable as an open-air lounge area with lightweight fold-away furniture and an awning above, which dramatically increases the (already very large) amount of usable living space when the yacht is in port or at anchor.

Most multihull builders find that their typical buyers are unwilling to spend more than €100 to save one kilogram of weight, but Gunboat owners understand its impact on performance and are often willing to spend €500 per kilo – or even more to save a kilo in the rig where it matters most. And it’s worth noting that the interior of a Gunboat is already engineered to weigh a ton and a half less than a typical cruising cat’s accommodation without any compromise on comfort.

In this case the weight savings keep 6803 on the highest performance side of the spectrum while still accommodating an elaborate water sports element to their cruising programme – including a dive compressor and six bottles, surfboards and kite boards.

Having a client with grand prix sailing credentials is a great motivator for a team building a high-performance yacht. However, Jelbert is accustomed to prospective buyers sending their agents, who are usually boatbuilders or professional sailors or both, to check out his shipyard and ask difficult questions. The owner of 6803 sent two industry titans, Bertrand Cardis of Décision and Groupe Carboman – builder of Alinghi America’s Cup challengers, Volvo 65s and more – and Edouard Kessi – inventor of 3Di sail technology – who both turned up in person to assess the Gunboat facility and team. ‘We’d just had everything NDTed and Bertrand was impressed with the quality,’ Jelbert recalls. ‘Naturally we were thrilled to have these legends of the industry come over – I was pretty nervous to say the least. Getting their stamp of approval meant as much to us as it did to the owner,’ he says.

Gunboat’s approach is to boost its own in-house capabilities and expertise by forging strong partnerships with other top-of-theindustry companies – the world’s leading naval architects, designers, composite engineers, sailmakers, spar builders, riggers, equipment suppliers and so on – to deliver the best possible quality, performance, safety and luxury. As one of the shipyard’s key suppliers commented: ‘They do procurement properly, like the top racing teams.’

For example 6803’s high-modulus prepreg carbon spars are built by Lorima, which also supplies many of the world record-holding multihull and monohull ocean racers. The two rig package options are optimised by Rigging Projects, whose custom hardware solutions on grand prix racers and superyachts have earned a stellar reputation: for 6803 a groundbreaking, genuinely failsafe new main halyard lock was designed and fitted. 6803’s sails were project managed by Pierre-Yves Jorand, the team director of Alinghi and head of North Sails Switzerland. Top-of-theindustry quality follows suit down to the details, where small but important deck fittings, like padeyes, are machined from high-grade titanium.

On the water, the remarkable stiffness of the 68’s platform translates directly into a very noticeable improvement in both performance and seakeeping. ‘The transfer of energy from the sails through the daggerboards is impressive,’ says Spike Abram, former captain of the first-generation Gunboat Tribe and now the shipyard’s brokerage manager. ‘Sailing on 6801 Condor, the more we pushed the more the boat loved it. Other boats get a bit tender and jumpy when you push, she just performed.’

Much of the credit for this engineering triumph is due to VPLP, says Gunboat’s head of engineering, Stéphane Renard. The 68’s structure is unusually intricate with many small bulkheads and ribs rather than a few big ones – and it’s a lot stiffer as a result. ‘This translates when you’re sailing offshore passages,’ Abram says. ‘Stiff, safe, secure, bulletproof – it’s just a really great boat to sail. VPLP’s way of transitioning from the V on the reverse bows into the flat part of the hull means that the boat moves through the waves really easily. It doesn’t seem to decelerate and allows enough buoyancy that the bows don’t bury, and it just gives the boat a beautiful motion.’

Professional sailor Scotty Bradford – another ex-Gunboat captain who helped deliver Condor and was back on board for the boat’s first race, the NYYC 175th Anniversary Regatta – is equally impressed. ‘I love the way it goes through a chop, both upwind and down,’ he said. ‘And the way the luff tension is maintained on the flying jibs as the wind increases makes those sails way more effective and is a real performance benefit.’

A third ex-Gunboat captain, pro sailor Anthony Kotoun, was also aboard for the NYYC regatta and describes the 68 as ‘the best example yet of a turn-key grand prix yacht. It was fast, reliable and did what we asked of it. It can take years to get a boat sorted enough to compete at the top level and the Gunboat 68 did it out of the package.’

With the cruising and racing potential of the Gunboat 68 fully validated and a fourth boat launching early in 2021, the Gunboat shipyard has an even more ambitious project in the pipeline: it’s time to start work on a larger, spectacular third-generation model. The new Gunboat 80 was still fully under wraps as this issue of Seahorse went to press but all will be revealed soon – watch this space.