Skip to content
You are here
Home > SailGP > SailGP: Danish team first to train in Bermuda 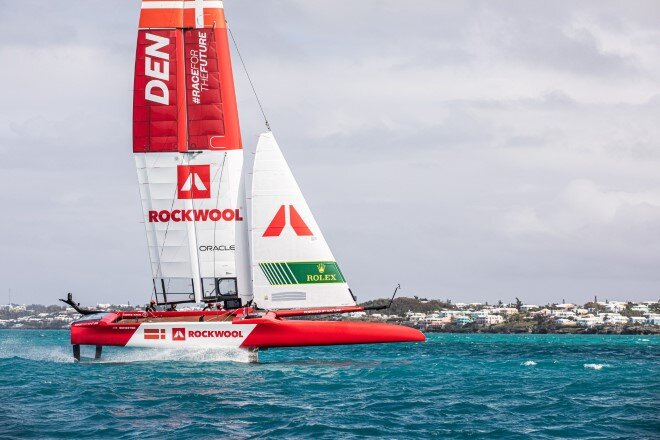 SailGP is officially back on the water, with the first of the supercharged foiling catamarans launched ahead of the Season 2 opener – the Bermuda Sail Grand Prix presented by Hamilton Princess – later this month.

Over one year since the high-speed F50 catamarans – some of the world’s most high-tech race boats – were last seen in action, the Denmark SailGP Team presented by Rockwool became the first of the eight nation fleet to hit the water on Thursday.

And, as the eye-catching boat took to Bermuda’s Great Sound, it signalled a long-awaited return to action for the global racing league.

“It’s a huge day for our team, and for the whole of SailGP,” said Nicolai Sehested, helm of the Danish entry.

“We’ve been dreaming of stepping back onboard the F50 for more than 12 months, and it feels kind of surreal that the day is finally here.”

He added: “These boats are absolute beasts – and they haven’t lost any bite, that’s for sure. I think we are going to see performance and speed limits pushed further than ever before this season.”

For the first time, the Danish boat featured an 18-metre wing sail – a new innovation ahead of Season 2 that allows the wing to increase or reduce in size in order to allow racing to take place in a broader range of conditions.

A new level of competition

Sehested said: “SailGP has always been about the best sailors on the planet, racing in identical, supercharged boats, and the new talent and experience coming into the league raises that level even further.

“We respect everyone but we certainly don’t fear any of our rivals – and we think we can surprise a few people this season. We’re looking forward to getting some good time training on the F50 ahead of the season opener.”

One year in hibernation

The last time the F50 fleet was seen in action was back in February 2020, before SailGP and a host of other major sporting events were curtailed due to the global pandemic.

And remarkably, despite having announced its entry in December 2019, that means that the Danish team has only clocked up around 30 hours onboard the foiling catamaran.

“On the water, there is still an experience gap, and compared to many of the other teams, we are still relatively new to the F50 despite having been part of SailGP for over a year,” explained Sehested.

“But we have spent the past 12 months honing our skills in other foiling boats, and working hard to develop as a team, with ROCKWOOL’s support.”

He added: “We’re in a much stronger place than we were in Sydney last February, and we’re confident and raring to go.”

A team the whole of Denmark can be proud of

Former World Sailor of the Year, Anne-Marie Rindom, and Katja Salskov-Iversen – both Olympic bronze medallists at Rio 2016 – will join the Danish campaign under a new initiative launched by SailGP to accelerate female participation and create clearer pathways to the top of the sport.

The pair will join Sehested and returning team members Tom Johnson (AUS), Martin Kirketerp (DEN), Rasmus Køstner (DEN), Hans-Christian Rosendahl (DEN) and Lars-Peter Rosendahl (DEN) as part of the next stage of the trial, where they will be immersed with the team to develop and hone their skills.

Bermuda Sail Grand Prix presented by Hamilton Princess takes place on April 24-25, 2021. From there, the season crosses to Europe where racing will continue in Taranto, Italy (June 5-6), Plymouth UK (July 17-18), Aarhus, Denmark (August 20-21), Saint-Tropez, France (September 11-12) and Cádiz – Andalusia, Spain (October 9-10). The league will then finish in 2022 with races in Christchurch, New Zealand and the Grand Final in San Francisco, U.S on March 26-27 where the sport’s top prize of US$1 million will be up for grabs.

In its first season, SailGP had a worldwide broadcast audience of 256 million across five events, and expects to see that number grow significantly with the increase to eight stops. Broadcast partnerships for Season 2 are already in place in more than 100 territories, including Australia (Fox Sports), Denmark (TV 2 Sport), France (Canal+ Sport), Japan (DAZN), New Zealand (Sky Sport), Spain (TVE and TV3), UK/Ireland (SKY Sports) and the U.S. (CBS Sports).

Fans will also be able to get close to the action via the award-winning SailGP APP.