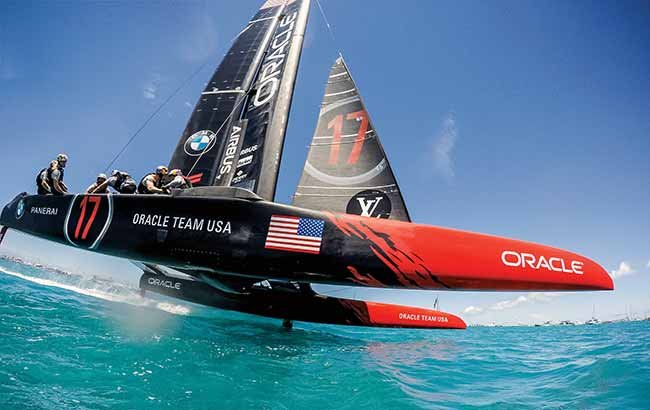 Former America’s Cup holders Larry Ellison and Russell Coutts are set to announce a new sailing league called SailGP that will be contested in an enhanced class of foiling 50-foot catamarans, a person familiar with the situation said Friday.

The person spoke to The Associated Press on condition of anonymity because details won’t be announced until Wednesday night in London.

Ellison, the software tycoon who co-founded Oracle Corp., and Coutts, a New Zealander, headed the Oracle Team USA syndicate that won the America’s Cup in 2010 and 2013 before losing it to Emirates Team New Zealand in 2017.

They have been working for several months on the concept of an annual league that will keep alive their vision of competing in fast, cutting-edge catamarans.

Plans call for SailGP to have five regattas in 2019, beginning in mid-February in Sydney, Australia. The other regattas are expected to be held in San Francisco, New York, Great Britain and France. Reports have indicated there will be teams from the United States, Great Britain and Australia, and entries are also expected from France, Japan and China.

While SailGP isn’t intended to compete directly with the America’s Cup, it will launch two years before the next America’s Cup, which is scheduled for 2021 in Auckland, New Zealand.

As CEO of the America’s Cup Event Authority prior to the 2017 regatta, Coutts championed continuity and stability via a framework agreement that called for matches in 2019 and 2021 in foiling catamarans. Emirates Team New Zealand was the only team that didn’t sign it, and the Kiwis, in conjunction with Challenger of Record Luna Rossa Challenge of Italy, decided to sail the 36th America’s Cup in a new class of foiling, single-hulled boats called the AC75.

The SailGP catamarans will be called F50s — the F stands for foiling — and will be considered a new class. The fleet for 2019 will be a combination of AC50s used in the 2017 America’s Cup that were dismantled and redesigned, and new boats built in New Zealand. While they will look similar to the AC50s, they are expected to be faster and will be sailed by crews of five rather than six. The catamarans rise up on hydrofoils and skim across the tops of the waves.

The GP in SailGP stands for Grand Prix. In recent years, top-level sailing events, particularly the America’s Cup, have compared themselves to auto racing’s Formula One due to radical technological advancements in boat design and TV-friendly formats.

Coutts, a five-time America’s Cup winner, and Ellison first won the America’s Cup together when Oracle Team USA sailed a 90-foot trimaran to victory over Alinghi of Switzerland’s catamaran in a one-off match in 2010. They scaled back to 72-foot catamarans for the 2013 America’s Cup and then to 50-footers last year in Bermuda.

While Coutts served as non-sailing CEO for Oracle Team USA, he previously won the America’s Cup three times as a skipper, twice with Team New Zealand and once with Alinghi. He sailed undefeated through three straight America’s Cup matches.

Plans call for Ellison to financially back the league initially until it moves to a franchise model.

The Australian team is expected to be headed by Tom Slingsby, who held a key role with Oracle Team USA in 2013 and 2017, and won a gold medal in the London Olympics. Last week, Sky News reported that Sir Keith Mills will have a role in running the British leg of the league. A spokeswoman for Mills’ Origin Sports Group declined comment but confirmed Wednesday night’s news conference.

The American team could include Rome Kirby, a former crew member with Oracle Team USA and the son of former America’s Cup sailor Jerry Kirby.