Skip to content
You are here
Home > Advertorial > Cornerstone classic 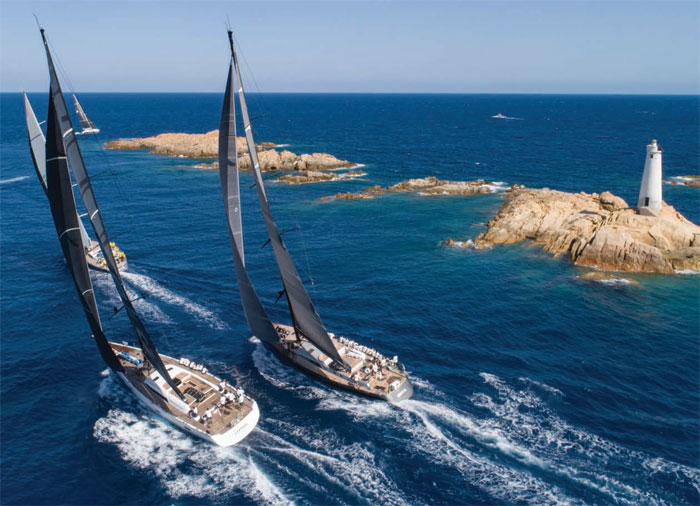 With 97 boats from 18 nations in seven classes and elite pro teams competing alongside amateur crews in perfect sailing conditions, the 2022 Rolex Swan Cup was a classic.

From New Year’s Day to the New York Marathon there are certain events that don’t just populate columns in diaries – they provide key anchors. Without them a calendar feels unhinged. Among the classic events in the sailing world that pin the season down is the Rolex Swan Cup.

For more than 40 years this biennial event, hosted by the Yacht Club Costa Smeralda in Porto Cervo, has not only been one of the best supported regattas of its kind, but for the many skippers and crew that return year after year it has become a non-negotiable feature of the sailing calendar. More recently it has become a natural focus of attention for Swan’s highly successful Nations League. It doesn’t take much to see why the Rolex Swan Cup has proved so successful.

For starters, the wide variety of sizes and designs on the entry list from the brand-new Swan 120 Audrey the First to the S&S designed Swan 36 Josian (a magnificently restored example of one of the earliest Nautor Swan models dating back to 1967) says a great deal about the range and depth within the Swan family.

This is a fleet where there is space and competition for all, where fully professional teams compete at the same venue as Corinthian crews.

The six-day series provides a mixture of racing within some of the most spectacular surroundings and the best conditions to be found anywhere among global racing venues. The notorious “Bomb Alley”, a stretch of water that runs between the Sardinian mainland and Costa Smeralda’s off-lying islands that feeds the racing fleet out towards the Bonifacio Strait is as spectacular as it is tactically challenging. And when a strong NW breeze is in charge there is no mistaking how it got its nickname.

The Rolex Swan Cup is also the final event in the season’s hotly contested Nations League, the one-design circuit organised by ClubSwan Racing that takes in five Mediterranean regattas. Porto Cervo plays a pivotal part in the League where the overall winner, along with those from each of the four Swan one-design classes are crowned at the Rolex Crew Party.

Main picture: The Rolex Swan Cup is a six-day series that provides a well judged mixture of racing for modern and classic Swan yachts of all sizes in the beautiful surroundings of Porto Cervo with some of the world’s best sailing conditions
This in turn is a reminder of the legendary hospitality, where the glitz and elegance of the Yacht Club Costa Smeralda is only matched by its natural capacity to host and entertain major events where the total crew list can easily stretch to well over 1,000.

For the 2022 season the final day’s racing was a good example of why this event continues to be so popular, while at the same time highlighting the scale and variety within the fleet that makes the Swan Cup stand out. For the ClubSwan One-Design classes, the final points were decided with two closely fought windward-leeward races. Meanwhile, the varied and diverse fleet of 56 Swans taking part in the Rating classes took on a long coastal race around the La Maddalena archipelago, taking in the islands of Santo Stefano, Caprera and La Maddalena itself.

‘The Rolex Swan Cup is the highlight of the Swan calendar and has been an iconic sailing event for the last 40 years thanks to a strong partnership with Rolex and Yacht Club Costa Smeralda,’ says Nautor Swan chairman Leonardo Ferragamo, an enthusiastic and regular competitor himself. ‘This race combines gentlemanly competition with a determined racing spirit and enhances the values of quality, elegance, innovation, performance, and reliability of each of the boats that make up the Swan community that travels from all over the world to share and celebrate its passion for sailing.’

This year a total of 97 boats 18 countries took part with the fleet split into seven classes. The Swan one-designs provided the whole fleet of four classes with the familiar ClubSwan 50, Swan 45 and ClubSwan 42 fleets that were joined for the first time in the Rolex Swan Cup by the ClubSwan 36 class.

The one-design racing circuit during 2022 has been particularly successful with their world championships taking place in Valencia earlier in the season where the fleets enjoyed a spectacular event and where the combination of intense racing and convivial socials made for an unforgettable regatta.

But while the One-Design Worlds may have set the bar high, the Rolex Swan Cup takes it onto another level. This is an event that is not simply about the latest racing machines. Indeed, the classic designs from the Sparkman & Stephens era that established several of the cornerstones and foundations of the Nautor Swan brand are raced as competitively today as they have ever been.

The Swan 36 Josian may have been the oldest boat in the fleet but there was no holding her back in the Classic S&S Class B where her crew were squaring up to some impressive and considerably larger competitors. By the end of the week the crew of Josian, led by owner Eugenio Alphandery, were on the podium finishing third.

The overall winner in this class was Vincenzo Onorato’s 1974 Swan 38 Mascalzone Latino XXXIII finishing a point ahead of fellow Italian Giuseppe Puttini’s Swan 65 Shirlaf. The message was clear, with just three points separating the top three boats, the racing in the classic classes was every bit as intense as anywhere else in the fleet.

But there was more drawing attention to this class than the high standard of racing. History and pedigree were also key factors with no less than five of the iconic Swan 65s, arguably the most famous of the classic and influential designs in Swan’s history including the Swan 65 sloop King’s Legend that came second in the 1977-78 Whitbread Round the World Race. These yachts were another reminder of the rich heritage and plentiful stories that abound within the fleet that make the Swan Cup as much a celebration as it is a regatta.

But there will always be a focus on the latest, hottest machines, and this year there was no question that the new boat that was stealing the show in this department was Pierluigi Loro Piana’s brand new ClubSwan 80 My Song. This was only her second event since her launch earlier in the season. The first had been the Rolex Maxi Yacht Cup a few days earlier where she had turned many heads not just for her stunning looks, but for delivering an impressive overall result. Her remarkable early performance had seen the crew arrive at the Rolex Swan Cup confident and race ready. After six days the competition in the Maxi class had been intense and delivered some of the tightest racing during the week.

When it came to the final reckoning it was the Swan 90 Freya that took the class on countback from Vicente Garcia Torres’ Swan 80 Plis-Play with the ClubSwan 80 My Song in third by just a single point.

For Freya’s owner Donald Macpherson, while victory was sweet, the week had been about more than the silverware alone. ‘Success in sailing, the Rolex Swan Cup, Porto Cervo, the YCCS, there is nothing better.’

In the Mini Maxi class, the route to victory had been a simpler affair for Stephen Cucchiaro’s Flow as he and his crew delivered a clean sweep of four victories to win ahead of Swan 601 sister-ships Arobas and Les Amis.

But while the celebrations were the focus for many, the event had a personal twist.

‘My passion for sailing, always present as part of my love for nature, increased at the last Rolex Swan Cup in 2018 when I was entranced by the beauty of the September sea and the Sardinian coastline together with the competence and sportsmanship of the competition,’ says the owner of the Swan 48 Mia Luigi Stoppani. ‘Having been a charterer I wanted to transform that sentiment into a new reality. So, I got Mia – Mine – and set off on a journey to regattas, (from 2020 Middle Sea Race to 2022 ORC World Championship) and cruises which have brought me to Porto Cervo for the Rolex Swan Cup.’

Others have attended several times to the point that the event has become a special and significant occasion. ‘We took part in our first Rolex Swan Cup in 1994 and then in 1996, and after a long break we returned in 2016 and 2018,’ says Vittorio Ghizzoni, owner of the classic Swan 43 Kokkola. ‘The Rolex Swan Cup was a great motivation to keep Kokkola looking her best and ready to race. It is one of the great joys that we still have the same crew of family and friends. Kokkola turned 50 in 2020 and we couldn’t wait to get back to Sardinia and give it our all out on the water with our friends in the Sparkman & Stephens class.’

‘The Rolex Swan Cup holds a very special place in the Nautor Swan calendar,’ says Giovanni Pomati, CEO of Nautor Group. ‘It is a true gathering of the whole Swan family and a cherished opportunity to celebrate the camaraderie that is at the heart of the Swan experience, highlight the range and diversity of the Swan brand, and meet the passionate owners and sailors who have travelled to Porto Cervo.’

So, whether it’s the excitement of taking the very latest launch out on to the racecourse, or revisiting and recreating a special moment it is clear that for the Swan family of owners and crew, there are some events in the sailing calendar that are key cornerstones in any given sailing season. The Rolex Swan Cup is one of those.