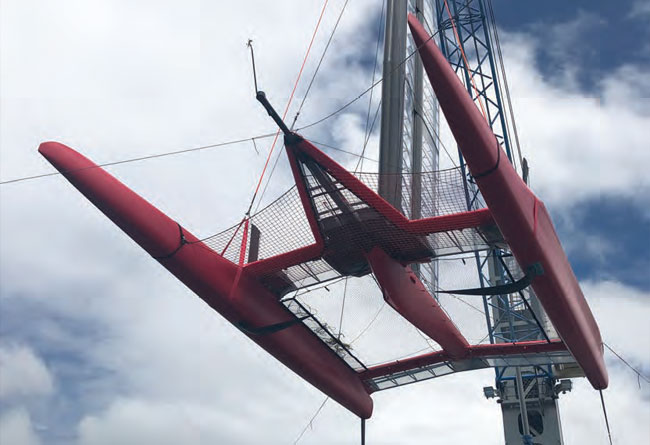 Updating the boats for a wider range of conditions and building new wing rigs for the SailGP fleet of F50 foiling cats is not only about making them super-fast and super-reliable… it is also about making sure all boats in the fleet are precisely as fast as each other.

As the SailGP circuit moves into its second year, a great deal of refinement and development has been poured into every aspect of the complex operation – not least on the boats themselves, which will be fitted with a new set of wings for 2020, made by Core Builders Composites (CBC) in New Zealand, which handles all of the manufacturing for SailGP. When the SailGP project took flight with its inaugural event at Sydney in January last year, the first priority was to standardise the hull platforms and foils, but there was no time to build a new set of wings.

‘The whole concept is for all the equipment to be strictly one-design, but, while the America’s Cup wings were very similar in profile, they all had quite different control systems,’ says Mark Turner, the managing director of CBC. ‘The next phase was obviously to fully standardise the wings across the fleet, which provided an opportunity to take a clean-sheet approach and come up with a new solution that is tailored to the particular demands of SailGP.’

This has involved a total redesign with two primary but related objectives: to extend the range of wind conditions in which the boats can continue racing and also to improve the control systems, in terms of the speed, accuracy and range of shape adjustment that can be achieved.

In what is essentially a tightly run and sophisticated entertainment package, SailGP operates within a brutal set of constraints dictated by broadcasting schedules and spectators paying for stadium tickets to watch an open-air, weatherdependent sporting contest. When the curtain goes up at the advertised time on the allocated weekend, the show must go on.

Confirming the age-old adage that when “man plans, God laughs”, the first year saw racing curtailed on a number of occasions due to too much or too little wind.

Under the direction of SailGP’s design director, Mike Drummond, a team of designers and engineers spanning multiple disciplines set about tilting the odds more in favour of man’s plans. The result is a modular structure with elements that can be added or removed to provide three configurations: a standard 24m wing, a heavy weather 18m wing and a light-air 29m version.

Because the top and bottom sections are always used, the main standing rigging components attach to them with the shroud lengths adjusted accordingly.

‘Solving the heavy wind part of the problem was fairly straightforward from a design point of view,’ says Drummond. ‘Just make the rig short enough and the limitations become sea state and foil control and cavitation. My expectation is that the boats could be sailed in more than 30 knots with the short wing.

‘Light winds pose a much harder technical problem because the force available is related to windspeed squared, so between six knots and four knots of windspeed, there is a 60 per cent drop-off in force to get moving. Other factors working against good light wind performance are that lift-induced drag from the rig increases at higher lift coefficients and a larger wing is heavier.’

Drawing some inspiration from racing One-Metre radio-controlled yachts, which utilise three rigs and can race effectively in a 3-30 kt wind range, Drummond says by gaining more area, reducing lift-induced drag and increasing heeling leverage, the 29m rig should enable good racing in as little as 4kts of breeze.

In plan form, the wings look very similar to the America’s Cup versions. Developed by Tom Speer, the wing sections are slightly thicker, first to improve the lift coefficient in light air and second to improve buckling stability when the 29m version is deployed.

‘The new wing is derivative only because the original wings were very well designed,’ says Drummond. The constraints in the redesign were only the need to fit with existing boats, righting moment and balance, although reducing building time, material wastage and spare parts were also a consideration.

‘Chris Mitchell analysed the shortto- tall configurations with varying amounts of twist to balance the joint loads, shroud loads and stability,’ Drummond notes. ‘When the wing is untwisted, the head falls off to leeward; with maximum twist, the head is lifting to windward and the upper leeward shroud carries a higher load.’

Within the modular framework of the new three-configuration rig, the biggest changes are internal. Gone are the mechanical rope and pulley control systems, replaced entirely by hydraulic and electronic controls.

‘Wing camber is controlled at five heights with hydraulic rams pushing or pulling directly on the flap,’ says Drummond. ‘The accuracy is expected to be 0.2° and the process of calibrating the fleet is simplified.’

At CBC, enormous effort has gone into establishing a production line that will ensure repeatable precision in the construction process. More than 300 components go into each wing, with the carbon fibre elements produced on graphite tooling board or carbon shell tools and assembled on CNC jigs.

The finishing and detailing of the internal structure is outstanding with 3D printed titanium fittings for the ram attachments and bearings and custom manifolds for the hydraulics. Extensive tooling means that many of the carbon frame elements are standardised square hollow sections as opposed to nomex cored. Intense optimisation by Paul Bieker and Pure Design & Engineering was required to mitigate against buckling of the thin walls.

‘Flap flexibility has also been a big focus with this generation of wings,’ says composite engineer and CBC general manager Susan Lake, pointing out the absence of shear webs. ‘During the America’s Cup, we were building less and less stiffness in the shear, so the flaps could generate more twist.

‘The designers have pushed that further this time, resulting in the removal of shear webs altogether.’

Separating the sections to reconfigure the wing is achieved by undoing three bolts and unplugging the hydraulic and electronic lines. ‘Making that change would take about an hour,’ says Nathan Libby, who is charged with the electronic systems.

‘It is pretty much a case of plug and play with connectors at each joint. It is quite an intelligent set-up. You do not have to recalibrate the whole system every time you change the rig configuration. The yacht will know automatically which configuration is in play.‘This is a massive step forward from the old system of ropes and strops and pulleys. The wing is much more controllable and much more accurate. ‘It moves a lot of hydraulic oil very quickly. Tack to tack is about two seconds at the moment. It has the potential to be even faster, but we are taking it gently at first. The range of movement is also greater, about 40° compared with about 25°, providing a lot more twist than before.’

The hydraulics involve three carbon fibre accumulators, two at the base and one at the top to maintain even oil pressure over a vertical span of up to 29m. Each hydraulic line has its own manifold and control system. ‘A lot of the refinement is based on the efficiency of the system and how the individual control lines interact with each other and how power is managed and distributed around the system,’ says Brad Webb.

Like most of the people involved in this project, Webb is a veteran of multiple America’s Cup campaigns. He notes that the F50 project has required a distinct change of mindset from single solutions for a one-off campaign, to series production for a fleet of one-design yachts competing in multiple events at multiple venues over an extended timeframe.

‘After 20 years of working in an America’s Cup environment, it is quite hard to change that thought process where the focus is on finding the lightest and most efficient solution and reliability considerations only come at the end,’ he says. ‘With this project, reliability choices have to be made at the beginning or we are not going to get through the season.

‘It is like having a devil and an angel on each shoulder, one saying you have to make it as light as you possibly can and the other saying it has to last through five or six events, with only so much time and resource to get things done. When you are a couple of days out from a regatta and you have six or seven boats all having the same issue, you have a real scramble on your hands.’

Susan Lake agrees: ‘The big difference is in the tooling. Because we are building eight of everything, you can invest in time and tooling. There are decisions you can make when you have a production run that are more efficient.’

Notwithstanding the mindset shift towards greater margins of reliability, the new wing – with all the electronics and the hydraulic accumulators, rams and oil lines – weighs in at less than 12kg over the minimum weight specified in the 2017 America’s Cup Rule. ‘Everyone is pretty comfortable with that,’ Lake smiles.