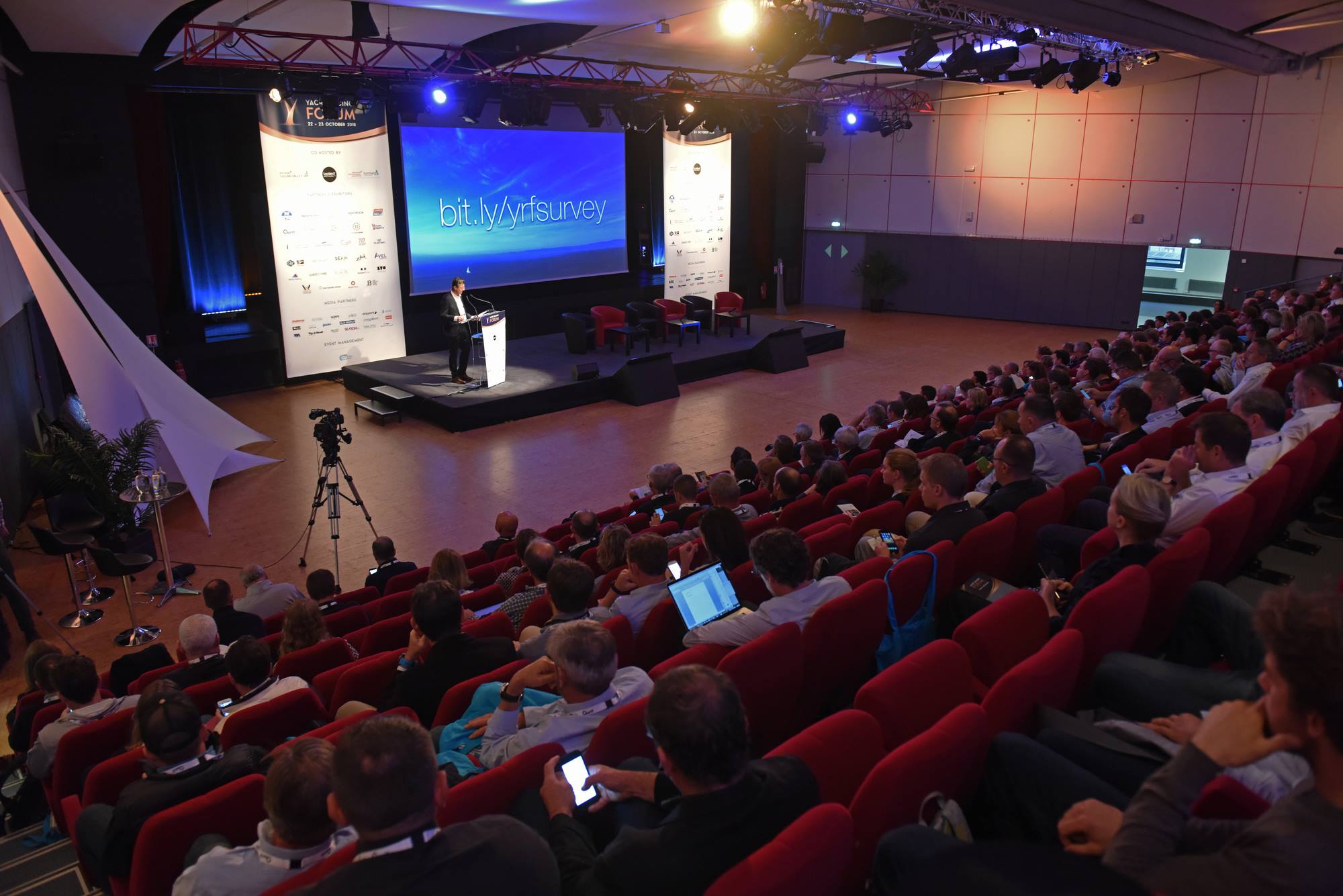 Conrad Humphreys is a former professional sailor who has raced around the world three times (Volvo Ocean Race, Vendee Globe, BT Global Challenge). He is the founder of Ocean Academy UK – a new high performance offshore training centre aimed at helping talented sailors between 18 and 25 to turn their sailing abilities into jobs in the competitive sailing industry. Here Conrad shares his thoughts after spending two days and nights at the Yacht Racing Forum in Lorient, France.

What a privilege to spend a few days in the Bretagne Sailing Valley with so many great friends. The Yacht Racing Forum was hosted in Lorient and no-one could be left with any doubt just how the sport of offshore sailing in France is forging ahead. With just a few days until the start of the Route du Rhum where 123 teams will take part in the 4 yearly Transat, French offshore sailing is booming, leaving much of the rest of the world in its wake.

To add some economic perspective, Competitive Sailing in the “Valley” generates sales of 56 millions euros out of a sector that turns over 205 million euros and employs over 1500 people. R&D alone is 5.5 million. These numbers are taken from the regional economic development agency which published a recent report on the economy of competitive sailing in Brittany (Bourgon 2018). The numbers only paint half the picture. A walk along the waterside in Lorient, where the old WW2 submarine bunkers are just a lasting memory of the 2000 servicemen that where last stationed here. When they left, the area was boarded up until one day a former Vendee Globe winner and sailing legend, Alan Gautier arrived with his Trimaran and asked if he could put his boat on pontoons. The local council kindly obliged and an opportunity was immediately born. The area in between the bunkers are now filled with start of the art hangers housing sailing race teams and sport projects. The marina resembles more of a F1 pit lane with the latest flying sailing boats lining the dock. Each of the four Ultimes, costing on average 13.5 million euros to build and the latest generation IMOCA 60’s with there giant foils. Lorient’s “La Base” is a technological marvel and a perfect example of what can be achieved when the holy grail of public, private and commercial minds come together.

I was there to gain some insight and see what the south coast of the UK could learn from our friends across “La Manche”. I work in Plymouth, a place that has much in common with Lorient, not least because both were so devastated from the bombing raids in WW2. The stretch of coastline from Falmouth to Portsmouth should take a closer look at the transformation of Bretagne. I believe we have many of the same opportunities within competitive sailing, but also the associated boom in technology and big data that was being showcased whilst we toured around the Morbihan coastline.

Plymouth, Britain’s Ocean City has some great things happening in the marine technology and offshore sectors and the recent investment from Thales to create the UK’s centre of autonomy is just one example. We need to speed up and unlock the vast waterside space that is coming onstream through Oceansgate and perhaps take a leaf out of Lorient’s book by welcoming the opportunities that could come from competitive sailing.

For our part, our new Ocean Academy UK, launched in September 2018 will now focus on building the talent pathway for 18-25 year old offshore sailors in areas from commercial to logistics, technical and human performance. Within the next 12 months we plan to launch curriculum pathways with both educational and business partners so that talented sailors have the opportunity to further gain qualifications and skills that will open up the sport of offshore sailing as an alternative to conventional degree pathways.

I spoke briefly to Christian Le Pape, founder and Director of Pole Finisterre, the high level offshore training centre in Port La Foret about the Government intervention that took place by the Ministry of Sport back in the late 80’s. The vision to support France’s top young sailing talent and build a programme that would encourage teams to set up in the Sailing Valley was game changing. Looking at the long list of Figaro, Vendee Globe and now Ultime record winners on the wall outside the classroom, Christian has every reason to feel immensely proud of what has been achieved.

It’s now time for the UK to up its game and realise its potential. In the last Volvo Ocean Race we had more British sailors taking part than any other Nation, mostly in senior roles. We have the talent pool and the skills base to support young talent and I see this as an amazing opportunity for the UK to grow.