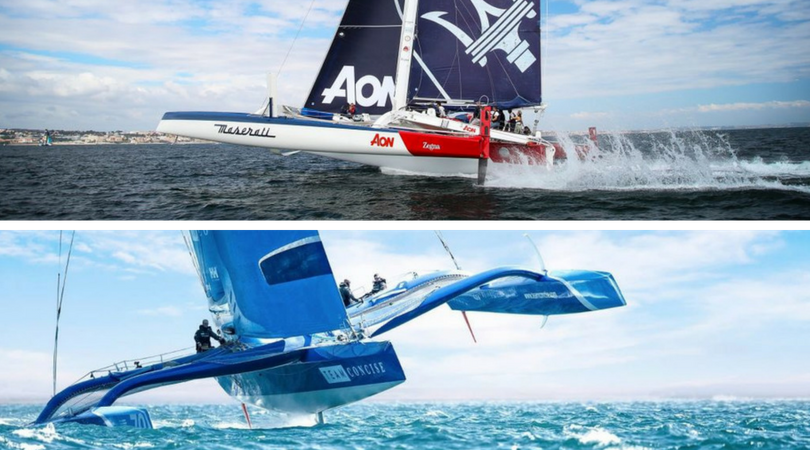 Two MOD70s trimarans have entered the RORC Transatlantic Race for a thrilling high-speed multihull match race from Lanzarote to Grenada.

Giovanni Soldini’s much modified Maserati (now called a Multi 70) and Peter Cunningham’s PowerPlay (formerly Concise 10) have both confirmed that they will be on the starting line for the 5th edition of the RORC Transatlantic Race, starting from Marina Lanzarote on November 24, 2018.

This 3,000 mile match will take the boats to Camper & Nicholsons Port Louis Marina in Grenada and both teams are very capable of breaking the multihull race record, set by Lloyd Thornburg’s Phaedo3 in 2015 (5 days 22 hrs 46 mins 03 secs).

Over the last two years Soldini has continually modified Maserati from its MOD70 set up to a foiling offshore record breaker. Maserati’s latest achievement was to set a new world record from Hong Kong to London. Maserati completed the 13,000 mile route via The Cape of Good Hope in just over 36 days.

“For the Hong Kong to London we were flying halfway around the world, but we had a lot of problems with debris in the water, so now the rudders kick up under shock. We are optimising the systems all the time, but that is normal when you are doing something new,” commented Soldini. “Maserati is different to PowerPlay, we should be faster reaching in flat water.

“Maybe PowerPlay will be faster in light conditions because Maserati has more wetted surface area. We are very happy to enter the RORC Transatlantic Race as it was very well organised last time and we had a very good welcome in Lanzarote and Grenada.”

PowerPlay will be skippered by Briton Ned Collier Wakefield who has joined the PowerPlay Racing team along with the nucleus of the previous crew. “PowerPlay will be starting with a turnkey optimised boat and a highly motivated fully trained race crew,” commented Collier Wakefield, who skippered Concise 10 in the 2015 RORC Transatlantic Race, completing the race in just over 6 days.

“Tony Rey with Cloud10 Racing and I have been looking for a multihull opportunity for a while, so I am truly thrilled to have been able to acquire the MOD70 and to have Ned and his great team join us,” explained Peter Cunningham. “I am looking forward to some wonderful racing and, as always with PowerPlay, a lot of fun! Hopefully we will be able to get together with other MOD70s for some fleet racing.”

Maserati and PowerPlay have also confirmed that they will be racing in the 11th edition of the RORC Caribbean 600, as will many of the teams racing across the Atlantic with the Royal Ocean Racing Club. A highly competitive and varied fleet of yachts is expected for the 2018 RORC Transatlantic Race and the overall winner under IRC will be awarded the RORC Transatlantic Trophy.