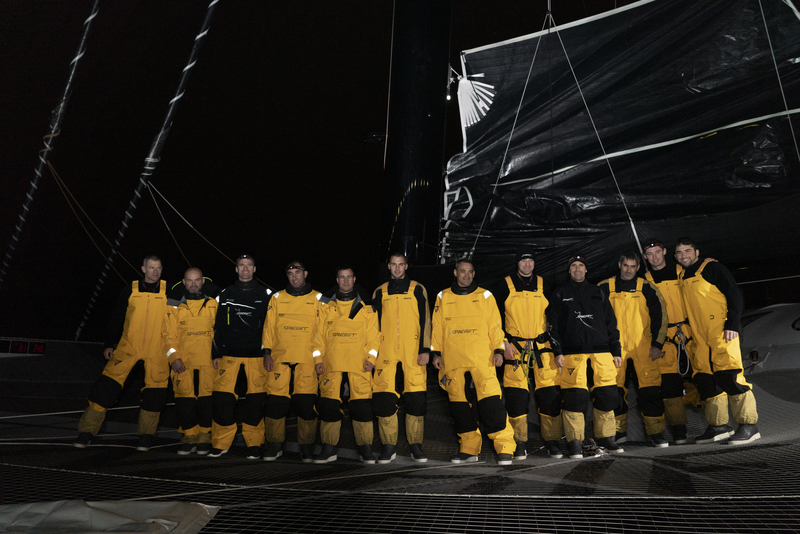 The round the world timer is officially ticking on the latest attempt by French skipper Yann Guichard and his 11-man crew aboard the maxi-trimaran Spindrift 2 after the team set off from a starting line projected off the island of Ushant at the south-western end of the English Channel.

The island close to Brest marks the most northern point in France and the crew of the French-flagged trimaran which crossed the line at 1147 and 27 seconds today know they will have to turn in a spectacular lap of the planet to get back there before February 26 at 1116 and 57 seconds to beat the record set by Francis Joyon’s crew on IDEC.

Weather conditions were good this morning when Spindrift passed the Créac’h lighthouse on Ushant to begin the circumnavigation which will see the crew pass south of all three of the world’s great capes.

Winds were at 20 knots from the south west which it is hoped will enable Guichard’s men to hook into two weather fronts that should slingshot them quickly past the island of Madeira and the Cape Verde Islands and onwards to the equator.

According to the team’s onshore weather router, Jean-Yves Bernot if things go well the crew could reach the equator in a little as five days, meaning a crossing as early as this Sunday night/Monday morning. From there the goal would be to round South Africa’s Cape of Good Hope within 12 days of the start.

These sound like remarkable times in which to cross thousands of miles of ocean, but then again, the Spindrift 2 is a remarkable boat, which at 40 metres (131 feet) is capable of average speeds of up to 35 knots in the right sea conditions.

While the first stretch towards the equator is looking favourable for a record setting pace, it is still too early to make a call on what weather the Spindrift 2 crew will experience once in the southern hemisphere.

An ideal scenario would be for them to find a low-pressure storm system spinning off Brazil to enable them to cut the corner on their anticlockwise route around the giant persistent high-pressure light wind zone known as the St. Helena High.

“It looks good up to the equator,” confirmed Guichard before the team departed. “The trade winds are well established [so] it should take less than five days. Then there are still the unknowns in the southern Atlantic, but we hope to reach South Africa in around twelve to twelve and a half days.

“One of the difficulties is the Saint Helena High in the southern Atlantic, which can sometimes block the road. It is not a problem to go around it if there is wind because [these] latest boats are going fast.

“We are a slightly lighter than the last time – which is why we are only twelve onboard,” Guichard said. “Below twenty knots we have a very slight speed deficit [compared to IDEC], but in anything above that Spindrift 2 is faster than before. We can keep our average speed above 35 knots if the sea remains manageable.“