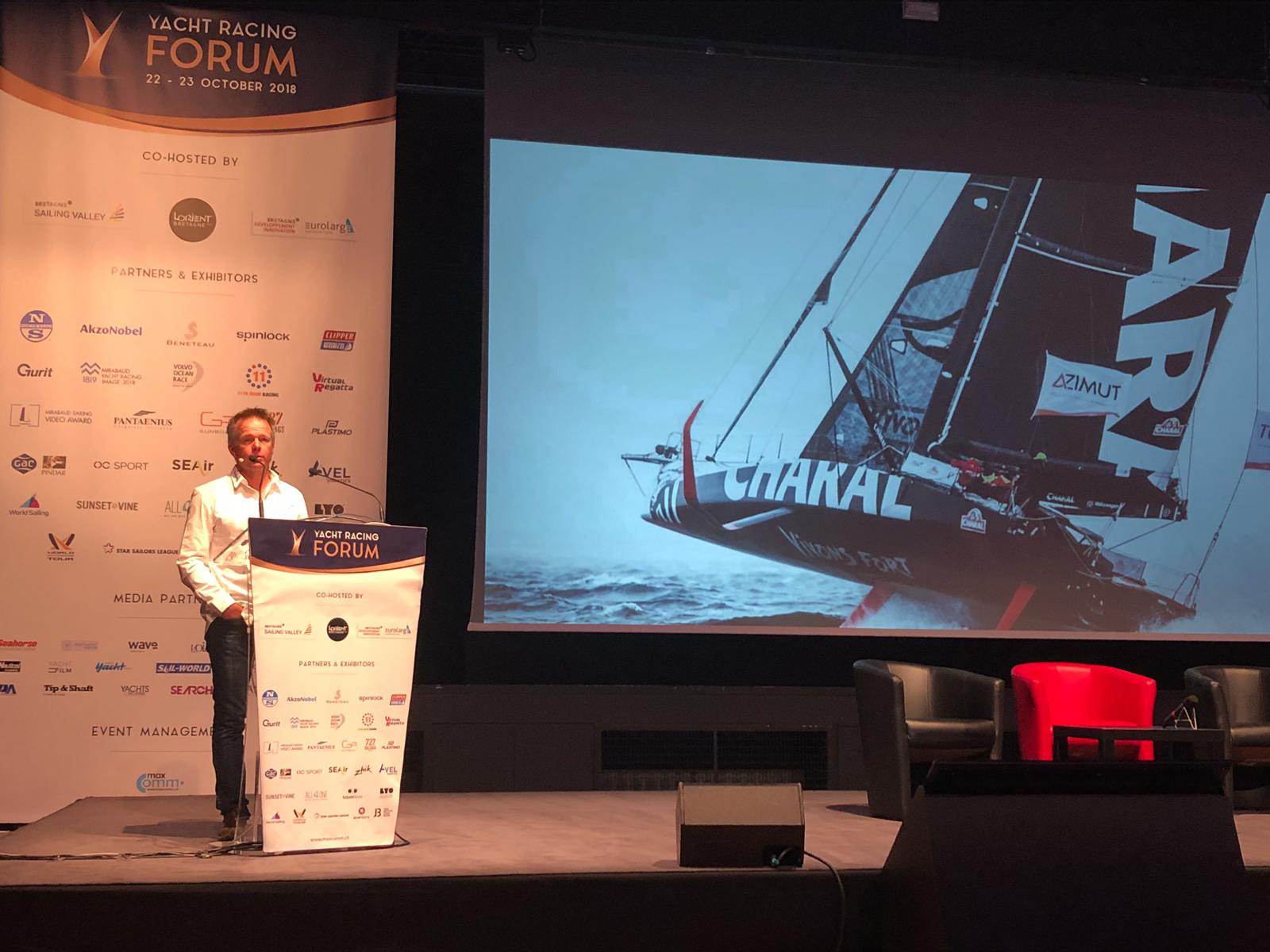 Speaking to the forum’s international audience of 450 delegates in a packed auditorium at Lorient’s Palais des Congrès conference centre the veteran ocean race campaigner gave his views on the current landscape for professional sailing.

Nicholson’s presentation took a look at the key classes and events that make up the professional racing landscape – beginning with the ongoing amalgamation of the Volvo Ocean Race with the IMOCA 60 class.

“This joining together of two very strong elements within our sport is happening at a critical time,” Nicholson said. “It won’t be without it’s challenges, but I believe it is the right move for both parties to join forces like this.”

Comparing and contrasting the America’s Cup with the newly emerging SailGP circuit Nicholson observed that both events “have plenty of vision, and one has vison and tradition”.

But he also questioned if such similar events could survive independently, going as far as asking the bold question if one day the two might join forces.

“Who knows?” Nicholson said. “Maybe if we can make a success of the Volvo Ocean Race and IMOCA 60 relationship then America’s Cup and SailGP might one day follow suit.”

Nicholson also highlighted the Australian-based Superfoiler league which has attracted significant national TV coverage for it’s upcoming second season, before singling out the Ultim multihull teams – several of which are based in Lorient as they prepare to take on the Route du Rhum.

“These teams continue the spirit of adventure that began with Lorient sailors like Eric Tabarly and later Franck Cammas, who first inspired the French public with their passion for ocean racing.

“That passion also resonated with the business community here in France and has enabled a solid commercial sponsorship model to flourish.”

Touching on the Paralympic and Olympic sailing scene Nicholson described his incredulity when sailing was removed from the Paralympics and called on a commercial organisation or philanthropic organisation to step up to fund disabled sailing until it can be reinstated as a Paralympic discipline.

He also decried sailing’s lowly ranking in the Olympic funding structure and called on World Sailing’s national bodies act and vote selflessly to help rebuild Olympic sailing’s image in the eyes of the International Olympic Committee.

“We are at Level D funding and the only lower level is Level E,” Nicholson said. “It’s pretty clear to me that the writing is on the wall and if we don’t do something to change our image, we will one day wake up and sailing will be out of the Olympics too.”

As examples of the changes required Nicholson mentioned kiteboarding – a discipline he said he hoped would be included in the Olympics soon.

“But let’s not try to make that exciting sport conform to the established racing formats that we already have. Let’s let the kiteboarders decide what format they prefer. We should look to companies like Red Bull who know what exciting sports formats look like.”

Nicholson also threw his support behind the idea of an Olympic offshore event with a 48-hour race for two-person, mixed-gender crew.

“To me it’s a no-brainer,” he said. “A two-day race means we can have coverage in the north and the southern hemisphere and with live feeds from the boat and live satellite tracking like in the last Volvo Ocean Race the viewership should be enormous.”

Nicholson also highlighted the global interest in sustainability and pointed out that sailing was better positioned than any other sport to take advantage of the sustainability movement.

“No other sport is so closely aligned with the sustainability message,” he said. “World Sailing have produced an excellent 48-page Sustainability document but they don’t have the power to enforce it at a national level around the world.

“If you are organising an event or regatta, I urge you to read the document and implement as much as you can to make your event as sustainable as possible.”

In closing his 30-minute keynote presentation Nicholson expressed his belief that the future for sailing was bright.

“I have been around this sport for a long time and I truly believe that yacht racing has never been in such a good place,” he said.

“Like no other time in history we have seen a huge ramp up of amazing classes. So now we have the most exciting boats the sport has ever seen.

“We have adventure by the bucket load and we have fantastic characters and role models for the next generation of racers to aspire to. And we have smart, savvy sponsors who want the best for the sport and for themselves.”