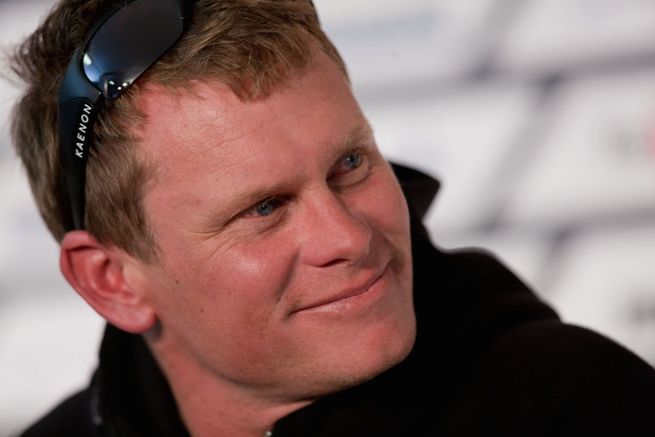 Chris Draper – CEO of the recently announced Great Britain SailGP Team – says the lure of leading a British team in the new international professional yacht racing league was just too appealing a prospect for him to turn down – despite having had to give up on an idyllic around the world family cruise to make it happen.

Draper first made his name in the 49er class where with crew Simon Hiscocks he won multiple world and European titles and the bronze medal at the 2004 Olympic Games in Athens, before transitioning to the America’s Cup where he was helmsman for Team Korea before joining Italy’s Prada campaign in 2013.

In 2016 he teamed up with Dean Barker as tactician and wing trimmer with the Japanese syndicate SoftBank Team Japan. When the last America’s Cup ended Draper and his wife and two children set off on a family adventure aboard a well-appointed cruising catamaran.

The Draper family had thousands of cruising miles under their belt by the time news began to filter through to them in the Caribbean that the until then rumours of a new professional sailing league planned by Russell Coutts and backed by Larry Ellison were coming to fruition.

“We had an amazing family adventure going on but when the opportunity came to represent Britain – that was a huge privilege that I couldn’t say no to,” Draper told Sail Racing Life.

“It had been bubbling away for a little while and I wasn’t really sure anything would come of it’” he said. “It took quite a long time to come together and I was quite uncertain how it would play out.

“We were about to set off downwind to the Panama Canal when I got the nod that I had got the opportunity with the British team – which was what I really wanted to do.

“I have worked for foreign teams for the last eight years of my sailing career so to get the chance to come back and race for Great Britain with peers of mine that I have raced and trained against or been involved in teams with before, was something I really wanted to do.

“So we decided to make the move to come home and I set about putting a team together. To be able to bring together a complete team all from Great Britain is fantastic.”

As well as his role as the team’s CEO Draper will also race aboard the British F50 catamaran as wing trimmer. He will be the only member of the UK team to have raced the super high-performance boats before, having recruited one of Britain’s top 49er hopes for a medal at the Tokyo 2020 Olympics – Dylan Fletcher and Stuart Bithell as helmsman and flight controller respectively.

Draper holds no fears over the ability of the pair – who won the 49er world championship in 2017 – to quickly get to grips with the revamped ex-America’s Cup boats.

“There are not many people in the world who have the skills and the capabilities to sail these boats but these two were perfect candidates,” Draper said.

“Stu is an incredibly talented sailor who won a [silver] medal at the London 2012 Olympic Games. He is a real character with a refreshingly free and easy approach to the sport.

“I have huge respect for him and always wanted to have the chance to work with him on a campaign like this. I have wanted to bring him into teams I have worked with before but never quite had the opportunity.

“Dylan is someone that I raced against a lot when he was very young. He was just starting in the 49er when Simon and I were having our heyday and he has gone on to huge success.

“Whilst he has huge talent, he is also someone who works incredibly hard – his work ethic is tremendous.”

At the SailGP launch in London Draper described Fletcher and Bithell as “not having any limitations around what they believe they can do with these boats”.

When we asked him to expand on that he drew a comparison with the evolution of the 49er class and the learning curve several generations of sailors had to climb since its inception.

“If you put it in terms of sailing evolution and think back to the 49er – a model I can easily relate to – where the generation before mine were ecstatic if they could get downwind in a straight line in 20 knots of breeze.

READ OUR “WHAT IS SAILGP?” GUIDE HERE

“Now the top teams – the likes of Dylan and Stu – are racing as hard in in 28 knots of breeze as they are in under 10 knots.”

Unlike the America’s Cup the SailGP format will mostly feature fleet racing – a factor Draper says the sailors and spectators will enjoy in equal measure.

“We did some fleet racing in Bermuda with four boats on the course,” he said. “We never sailed in any extreme conditions, but we raced in 18 knots and if you speak to any of the sailors involved and they will tell you it was pretty much the most fun sailing we did in those boats by a long way.”

Draper believes Fletcher and Bithell will not take long to master the intricacies of sailing the F50 cats that are slated to be capable of speeds up to 54 knots (62 miles per hour). He expects the racing to be breathtaking.

“They will have seen what we can already achieve with the boats – we went through trying to do the first foiling tack and now if you are not 100 per cent foiling for the whole race you are dead in the water,” Draper said.

“Now we have removed the oil demand we are going to have hydraulic energy constantly on tap, and so they have the ability to do any kind of manoeuvre that they want to, on demand.

“The scope is endless and I’m sure we will be doing VMG gaining tacks in about a year and half’s time. Then you will be able to tack as often as you want without losing anything.”