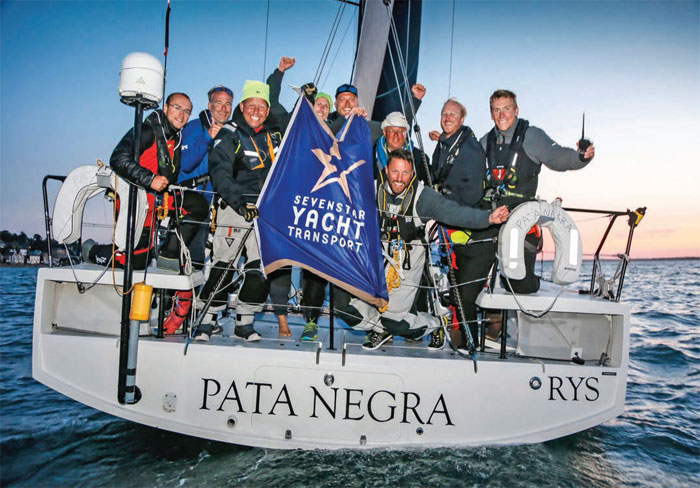 The Round Britain and Ireland race lives on long in the memory of anybody lucky enough to have competed in a previous edition…. But winning the toughest of European offshore events is unforgettable

If you ever wondered if you’re tough enough, the 2022 Sevenstar Round Britain and Ireland Race is for you. Three-times longer than the Fastnet, some round-the-world veterans even go so far as to suggest it could be as hard as a global circumnavigation.

You don’t have to venture into the farthest flung corners of the world’s oceans to encounter the harshest sailing conditions. If you live in the UK, they’re all in your backyard. ‘The Sevenstar Round Britain and Ireland is one of the toughest races I have ever done,’ says two-time Clipper Round the World Skipper, Gareth Glover. ‘At times racing in the Clipper is simple, pointing in one direction for weeks on end. This race has tidal gates, wind holes, 40 knots of breeze, big sea state; it is just relentless.’

First organised by the Royal Ocean Racing Club in 1976, the 1,805nm Sevenstar Round Britain and Ireland Race is one of the highest peaks that any offshore racer could hope to scale. Held every four years, the next edition will start on 7 August 2022. Starting from Cowes and exiting the Solent to the east, the course takes a westerly clockwise direction around a myriad of headlands, through treacherous tidal gates.

The Sevenstar Round Britain and Ireland is a World Sailing Offshore Special Regulations Category 1 race with RORC prescriptions. At least half of the crew must have completed at least 500 miles offshore racing within 18 months of the race start, including the skipper. Every crew member must also have experience of sailing a boat offshore and be prepared to encounter heavy weather.

‘This is a race like no other in the RORC programme,’ says RORC racing manager, Chris Stone. ‘It is a very tough race in remote locations with a lot of navigational work required. This is not a race to put a crew together at short notice, it is a race for a wellseasoned and well-practised team who have passed the qualification process. It is not a race for novices.

‘You could encounter everything that you would expect to see from the Southern Ocean all the way up to the Arctic Circle. And then on the way south, you have the navigational challenges of the North Sea to contend with. In terms of miles, this race is three Fastnets back-to-back but in real terms it is exponentially larger than that. Completing it is an achievement beyond most others.’

The overall winner of the Sevenstar Round Britain and Ireland Race is decided by IRC time correction. The winner of the last edition in 2018 was Giles Redpath’s Lombard 46 Pata Negra. Antoine Magre was one of the crew and will be racing again in 2022 on Class40 Palanad 3. A number of Class40 teams are expected. Palanad 3 is both the 2021 Fastnet Class40 champion and overall winner of the 2021 RORC Transatlantic Race.

‘In 2018 I said to myself that I need to do this race on a Class40. There is some upwind, but a lot of reaching angles where you can open up – it will be a whole new world in a Class40,’ says Magre. ‘It is a very fast and very harsh race; that is the attraction. You know you are going to have storms to deal with and it can be wild and hostile. It is a complete race in terms of seamanship skills and I would love to put a second notch on my belt!’

British servicemen and women have raced with the RORC since the Club’s conception. The British Army Sailing Association (ASA) was founded in 1947 and has competed in RORC races for decades. Will Naylor will skipper the ASA’s Sun Fast 3600 Fujitsu British Soldier for the 2022 Sevenstar Round Britain and Ireland Race. On three different iterations of British Soldier, Naylor has completed every race and this will be his fourth. ‘For me this is a proper offshore sailor’s race. You get all of the weather conditions and you use every sail in the locker.

‘The biggest achievement is to finish; a good result is a bonus. There is no better sailing test of the military skills of leadership and teamwork. Getting round in one piece is down to the crew. In 2018 we had power issues so we had to sail the boat like a dinghy. We crossed the finish line at 0200 on my birthday. It was my first race as skipper and we had got the job done. I genuinely love this race; it is a fantastic experience and that is why I keep coming back.’

Senior RORC member Gavin Howe competed in 2018 aboard Tigris, a Sun Fast 3600, typical of the size of boat that competes in the race. While it was his 23-year-old team mate Sam Cooper’s first time, Howe’s first Round Britain and Ireland Race was back in 1978. ‘I did the race when I was roughly the same age as Sam, so returning to it is very nostalgic for me,’ he says. ‘Back then I raced two-handed with Mike Owen on a 24ft Finot design, Rêve de Mer. We had to modify it to make it big enough for the entry requirement!

‘In those days we had no GPS, no electricity, not even a VHF. All of that is very different for the race today. You have to complete the statutory 500 miles racing with the RORC and comply with the special regulations. It’s incredible to look back and think that we really did this race in a boat with a 17ft waterline and no selfsteering or electricity!’

The race attracts sailors of all ages. Teenagers Lou Boorman and Elin Jones are planning on taking on the race doublehanded, despite most of their racing experience being on short courses in Topper dinghies. The girls are doing everything they can to build the required experience between now and the start. ‘We were in the Welsh and British National Teams for Toppers. Elin has experience offshore and is currently qualified on paper up to Day Skipper but will be completing her Yachtmaster Ocean after her term at university finishes,’ says Boorman.

‘What drives me to do the race, especially this year, is that we will be breaking records. I will be the youngest skipper to ever compete in it (as far as we know the youngest skipper was 21 in the 1988 race). So I would be the youngest female skipper too. One of the best things about this race is that we can see the whole of the UK from a perspective that no one else gets to see it and that’s a real privilege. I might be able to see my home county in the first leg too which is always a bonus!’ The young duo are looking to charter a J/109 for the race and there’s a lot of fundraising to be done between now and the start, but Boorman and Jones are tenacious.

While the standard direction is to race clockwise, in 2014 RORC made an 11th-hour call to send the fleet anti-clockwise due to the impending arrival of an intense low-pressure system over the northern UK. It came as a relief to the competitors who could now set out on a downwind charge instead of an uphill battle. It was a scary but exhilarating ride, particularly for the fastest boats in the fleet. Five world records were broken, including the outright record by the MOD70 Musandam-Oman Sail. Skippered by Sidney Gavignet, they finished the race in three days, three hours 32 minutes, 36 seconds.

At an astonishing average speed of 23.48kts, Oman Sail-Musandam set a record that could stand for many, many years. ‘The weather was exceptional…I doubt you could find better for the course, let alone the race. We went around Great Britain and Ireland without a tack, only gybes. No tack, zero tacks. That is rare, possibly unique,’ comments Gavignet.

That same year, Abu Dhabi Ocean Racing’s VO65, Azzam, skippered by Ian Walker, set the monohull race record of four days 13 hours 10 minutes 28 seconds. ‘So much of that race is a blur now, but I can remember that we didn’t tack until we got back to the forts, not long before the finish. There’s no doubt that this is a pretty tough race, it’s a proper offshore race. It’s not like the Fastnet which is a bit of a sprint, it’s 2,000 miles of hard sailing. But you also see some beautiful places along the way. The whole west coast of Ireland is absolutely stunning.’

Ross Appleby, skipper of Scarlet Oyster, has a wealth of offshore racing success and has some good advice for would-be competitors in the Sevenstar Round Britain and Ireland Race: ‘I was very careful about choosing and preparing this crew. Everyone on board has done a Fastnet or equivalent, and as a team we did three RORC races to pull ourselves together. If you want to finish this race, I would recommend you do the Fastnet first. Essentially this race is three Fastnets; colder at the top and you are very likely to encounter gale force conditions for extended periods – you need to be ready for that.’

Click here for more information on Round Britain and Ireland RORC