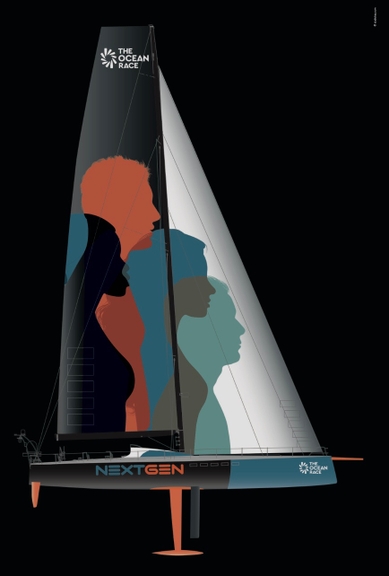 Sailing Holland and DutchSail have announced that they will compete in the VO65 class in the upcoming edition of The Ocean Race with ‘SAILING TEAM NEXTGEN’ – a Dutch-owned team sailing on behalf of yacht clubs the KNZ&RV and KRZV De Maas.

The campaign is focused on future generations and supported by five partners, each of which is committed to the next generations based on their own expertise. In addition, the team can count on the support of a large group of companies united in a business club.

It’s the thirteenth time in fourteen editions a Dutch-owned team will compete in the world’s most prestigious sailing competition around the world. The campaign can count on the support of Dutch Olympian Carolijn Brouwer who – racing aboard the Chinese-flagged Dongfeng Race Team – made history in the last edition when she became the first woman to win the race.

After three participations in foreign teams, it’s the first time that Brouwer has committed herself to a Dutch campaign in The Ocean Race.

“Historically the Dutch are the strongest country in The Ocean Race,” she said. “ABN AMRO ONE was the last Dutch-flagged boat to win the race, but there was no Dutchie on board. In the last race I was on the winning boat – but that was not with a Dutch team.”

“However, I have never sailed in a Dutch team. This campaign is hopefully going to change that. Not for myself, but for the next generations. I really believe we could inspire a lot of young kids back at home and at the local sailing clubs. Next to that, I would like to transfer my knowledge and experience to the next generation of young sailors. They need to see that dreams are achievable. ” FOR THE NEXT GENERATION
The campaign creates a unique collaboration between the most important Dutch sailing organizations, knowledge institutions, and companies who are all jointly campaigning for a better world for our population’s next generations.

“We opted for a broad campaign where there is room for larger and smaller sponsors next to the business club,” said team director Gideon Messink from Sailing Holland. “These are all companies that can identify themselves with themes such as innovation, sustainability, and a high-performance culture.”

Messink along with coach Anita van Oeveren were also responsible for Team Brunel in the previous two editions of the race.

“All these partners have one thing in common: they contribute to a better world based on their own expertise,: said Van Oeveren. “The talks with a number of these parties are in the final phase, so we can now launch the campaign. At the same time we certainly still have room for companies to join the team. Supporting the team can be done in different ways, depending on budget and interest. We also need that extra support to be able to set up a winning campaign.”

EXCITING THE NEXT GENERATION OF DUTCH SAILORS
“As sailors, we are excited about the news that the boat has been registered and will compete in the race.” said 27-year-old Jelmer van Beek. Van Beek is one of the twelve young Dutch Sailors under the age of thirty who made many miles on the boat in the past three years, including in The Ocean Race Europe last summer.

“We look forward to sailing with Carolijn in the near future,” she said. “We already spoke a lot on the phone. But due to the situation in the world in the last few years, we haven’t been able to sail together, but that will soon change. In sailing it is all about experience, making hours is important and good preparation is essential. We’re on track.

“Thanks to the support of (among others) the Janssen de Jong Group, we, have already made many miles in the past years. Jorden van Rooijen, Laura van Veen, Rutger Vos, and I, for example, have crossed the Atlantic Ocean several times already with this boat. Now it’s up to us to secure a place on board in the coming months.”

TIMELINE UNTIL THE OCEAN RACE
With 262 days left until the start of The Ocean Race the team is already begun preparations for the around-the-world marathon. The V065 boat – currently named Janssen de Jong – sailed from Sint-Maarten to Jeddah where the boat will stay for an event in the coming weeks. Sometime around mid-June the boat will set course for The Hague in the Netherlands. This leg will be used as a training block and selection for The Ocean Race. By the end of August – after a refit in the Netherlands – the boat will sail to the Balearic Islands where the crew will use the rest of the year in preparation for The Ocean Race start on January 15, 2023, in nearby Alicante, Spain