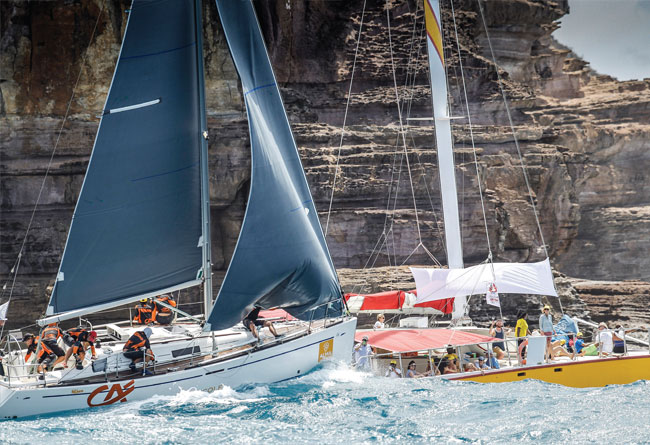 J/24 to 240-footers – the Caribbean winter circuit has come a long way in recent years. In 2020 ‘something for everyone’ will be a great deal more just than a slogan.

Wall to wall sunshine, sparkling clear waters and steady trade winds, the conditions alone have long been among the major attractions to racing in the Caribbean. Add to this the region’s legendary reputation for outstanding parties, lay days, music and general fun ashore and it’s easy to see why the Caribbean regatta circuit has been a key part of so many people’s sailing season, for so many years.

But like many regattas around the world, even the most enticing events in this sailing paradise have previously struggled to maintain their momentum. The reasons for the change have been widespread and complex, but at the heart of the issue is the way that competitors themselves have changed how they work and play. Increasing day to day demands of work puts sailors under more pressure to play closer to home. Put simply, habits and holidays have changed.

While times have been challenging, regatta managers work hard to maintain the uniqueness of each island’s event and keep the regattas relevant. The wide variety that is available throughout a fourmonth- long season among the regattas has helped to provide unique racing experiences throughout the island chain.

‘One of the key advantages that the Caribbean has had is the ease with which people can get to the events,’ says Alison Sly-Adams who is president of the Caribbean Sailing Association.

‘The ability to fly in and take part on a race-prepared boat as an individual with no other organisation required has been very popular with those who are operating to a tight time frame. It is a similar story for those who are coming to race as a group too. With the logistics pre-sorted, from race entry to accommodation and transfers, guests can concentrate on simply enjoying the excitement of racing and all the shoreside activities, again special to each island.

One of the most important influences in the region’s popularity with racing sailors lies in the wide variety that is on offer from intimate, relaxed racing, to fully blown offshore events.

And while some may choose to fly in and fly out to specific events, one of the other driving forces behind the Caribbean’s regatta revival has been the number of transatlantic events that have fed boats into the region.

The Atlantic Rally for Cruisers, the Royal Ocean Racing Club’s Transatlantic race and the Transquadra have all fed boats into the region. With this has come greater awareness about what’s on offer which has in turn helped to build participation. Once people have crossed the pond, the idea of a season of Caribbean racing becomes a pretty appealing reality.

So what are the highlights on the menu for 2020? Barbados Sailing Week gets things under way in January with a number of coastal races culminating with the Mount Gay Round Barbados Race on the final day.

From there, the next stop for the 50 or so boats that manage to get an entry to this compact and well-talked about five-day event is Grenada Sailing Week.

A fleet that is growing is the multihull class. As the sailing performance of modern multihulls has improved and the racing gets better, the appeal of a comfortable, spacious boat that can easily accommodate a reasonably sized crew provides the icing on the cake and has led to growing fleet sizes at several of the key regattas and a new event mid-February, the St. Maarten Multihull Challenge.

After this, the season changes gear with the Royal Ocean Racing Club’s demanding, yet ever popular Caribbean 600 in February.

‘The 600nm course sees more than 30 nations competing,’ says RORC racing manager Chris Stone. ‘The race starts and finishes in Antigua and threads around 11 Caribbean Islands, but the committee is examining options to reversing the course. After 10 years we think it is important to set the next challenge for the new and returning sailors.’

While the race is considered to be at the tough end of offshore racing, the event has inspired an increasing number of doublehanded entries which are starting to develop a new class at other events. Antigua Sailing Week also had a doublehanded classes this year and plan to continue for 2020.

The St Maarten Heineken Regatta in March is the next major event on the calendar, a well-known and easy to get to four-day series that caters for all types and classes of boats.

New in 2020, the superyacht season in the region gets off to a later start as the Superyacht Challenge Antigua moves to mid-March, but makes it easier to follow on to the biggest superyacht event, the St Barths Bucket – a showcase for some of the world’s largest, finest and fastest yachts as the superyacht scene descends on the chic French island. As much a spectacular parade of sail as it is a serious event, this is a regatta that has a real wow factor for spectators.

After that, the theme swings to the other end of the scale as the focus moves to the St. Thomas International Regatta at the end of March. While this event has its own slice of glamour, one of the big appeals is that it claims to have the largest one-design fleet of the major Caribbean regattas.

‘The IC24s offer handicap-free racing,’ explains Carol Bareuther. ‘Plus, because the IC24s are charter boats, it encourages sailors to fly in and sail rather than having the expense of boat transport and logistics.

‘In addition, we can boast about good racing too. I’m sure all events can say the same, but we bring a long-time team of professional race officers down from the US and make a conscious effort to not offer one-size-fits-all race courses. To do this we provide the traditional Caribbean style using islands, cays and rocks as marks when possible, in addition to buoys’.

Moving across the Channel one of largest international regattas in the Caribbean continues an almost a 50-year tradition of cutting-edge racing. The BVI Spring Regatta and Sailing Festival has long been a “must do” race with almost 100 entries last year from 18 countries. With its superb scenery, the regatta started using all three bodies of water, an ocean, a sea and a channel along with 51 islands to create top racing for the 15 classes over the race week. The race committee uses this vast archipelago of the islands to give racers an opportunity to tour and explore. The world’s largest charter company, The Moorings, offers a great selection of monohulls and multihulls to race.

‘Setting the bar higher each year for new and returning sailors has been our goal for almost half a century. Known as the friendly regatta, the competitors return year after year for more great racing and to uphold or up their game to win,’ said regatta director Judy Petz.

Next stop in 2020 is Antigua Classics week, which hosts an impressive display of yachts from a very different era and next year will move to an earlier slot in the calendar. ‘This is a truly world-class event where like-minded people from all over the globe gather together to share their passion for racing some of the world’s finest classic, vintage and traditional yachts,’ says regatta coordinator Leslie Arnold. ‘Set against a unique, historic backdrop, with four main race days, a singlehanded race, concours d’elégance and winding down with traditional gig racing and cream teas, this is a must on any serious sailor’s bucket list.’

In April, St Barths is the focus once again, this time for some serious racing in big seas and open waters in Les Voiles de St Barths – another spectacular display of some of the world’s best yachts and crews in action.

Then it is time for the season’s grand finale, the best known of them all, Antigua Sailing Week. In recent years the race format as well as the activities ashore have been reviewed to refine this event. The race management team has listened to the competitors once again and for next year will be introducing a number of changes including some longer courses with some new marks that mean that the courses can be more varied.

The daily prize-giving continues to be an extremely popular feature, especially as it brings a focus to each day and brings people together to help create the very thing that the event has been famous for, its social side.

Antigua Sailing Week is also popular with those left to sort out the end of season logistics. ‘One of the big advantages of this island and the timing of the event is that you can ship directly out of Antigua back to Europe,’ says Sly-Adams. ‘There are good facilities for all, including for the big boats, so it makes good sense for many to finish their Caribbean season here’.

But there are some who still can’t get enough Caribbean racing.

One of the most recent additions to the calendar is proving to be very popular with those who are heading back to the USA or making their way to Europe. ‘The Antigua to Bermuda race was set up in 2017 to have some fun racing up from the Caribbean to the America’s Cup in Bermuda and it has continued as boats have realised how beautiful the course is,’ says race director Les Crane.

‘One thousand miles of warm water, along with the safety of knowing you are surrounded by other alert racers and set up for a good party at the start and finish. For some, it’s the perfect way to end their Caribbean season’. 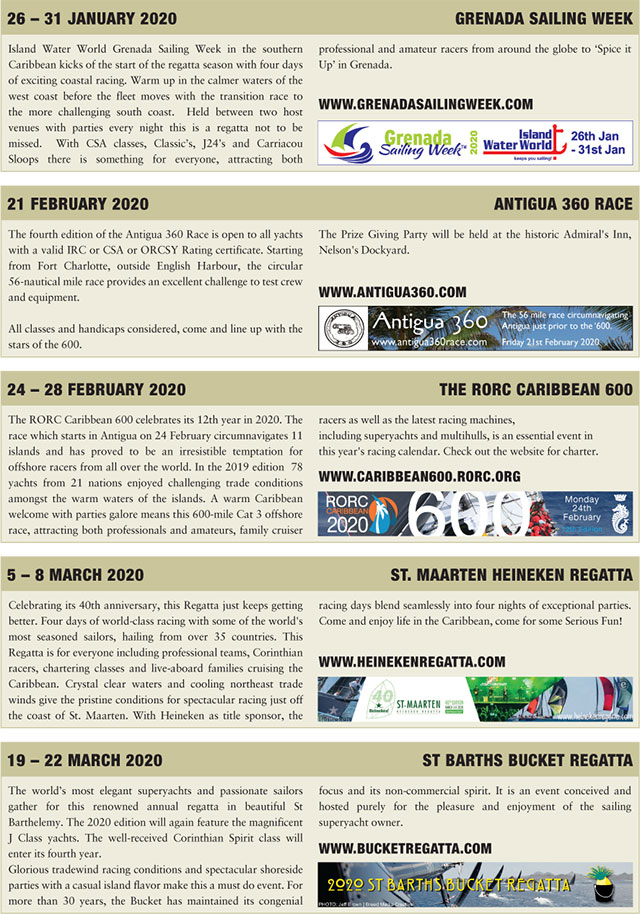