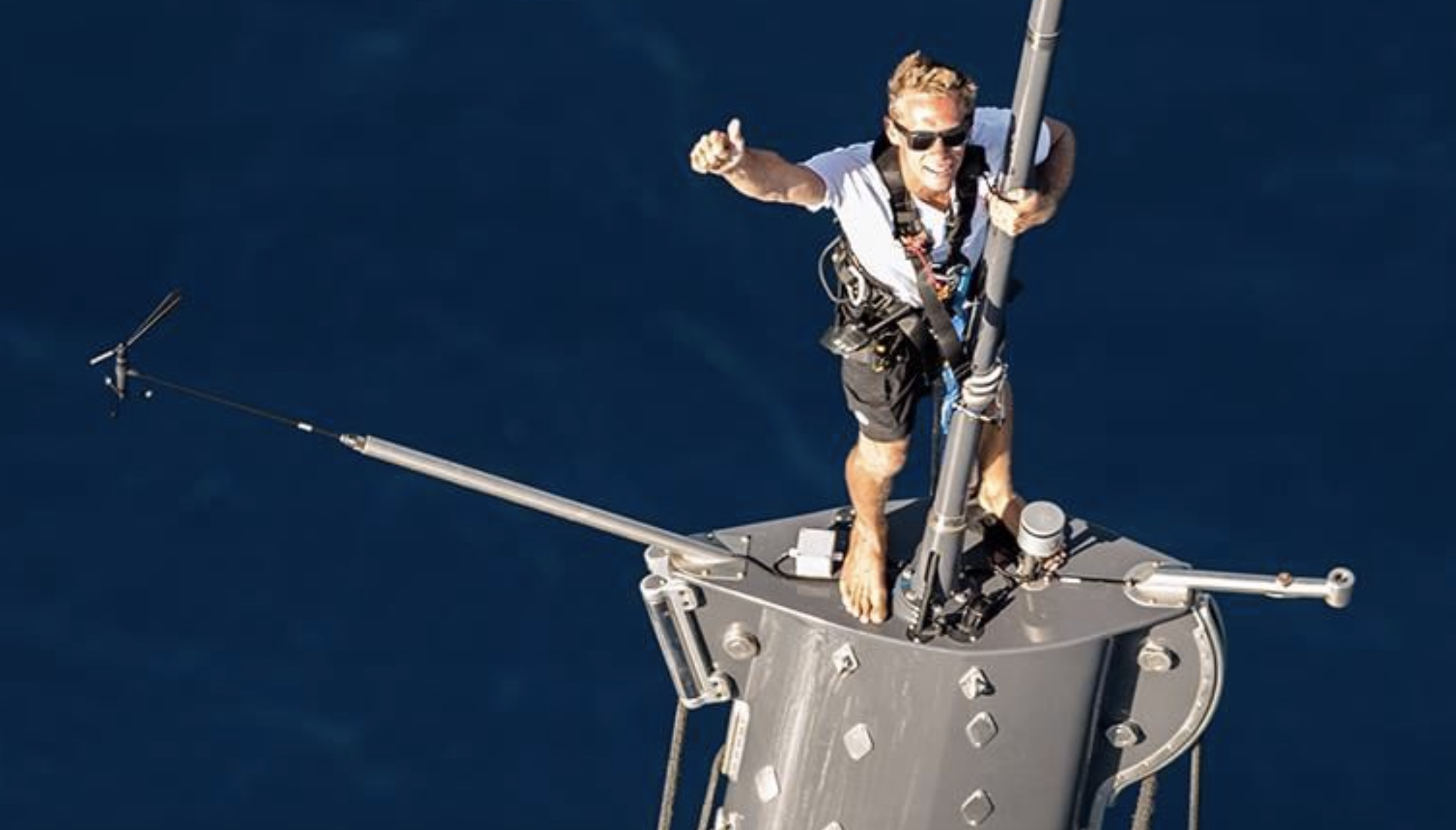 Not long ago, solid carbon rigging was only seen on the edgiest of grand prix racers. Now, since Carbo-Link has helped transform the sector, this most advanced of racing products is used on many large high-end superyachts.

The performance-enhancing benefits of Carbo-Link’s solid carbon rigging are becoming more widely known, with a broad variety of highperformance racing yachts – Ultim trimarans, Imoca 60s, AC50s and AC72s, leading contenders in the Maxi 72 and Wallycento classes, plus some of the world’s fastest superyachts – achieving substantial reductions in both weight and wind resistance.

But for many owners and skippers one key question remains: what’s it like to live with?

It’s actually a lot easier than most people think. You don’t hear much about service and maintenance of Carbo-Link rigging because it’s inherently durable, very reliable and surprisingly simple to repair. A specially developed, toughened resin system – which is unique to Carbo-Link –accounts for much of the durability. Stepping up to solid carbon means fewer hassles and, after the initial investment, a lower cost of ownership going forward.

Most types of rigging must be replaced or repaired periodically, often after four or five years, but Carbo-Link’s solid carbon rigging can last as long as the mast and the rest of the boat’s structure. For this reason, Carbo-Link rigging can substantially increase a yacht’s resale value whilst contributing to a reduced cost of ownership.

An obvious advantage of Carbo- Link’s solid carbon rigging is that it’s easy for the crew to check without any special equipment or training. There’s no cover to remove for a visual inspection and any damage that could lead to failure can be seen on the surface, where it’s easily spotted by a crewman sent aloft in a bosun’s chair. Chafe and impact damage are rarely found – solid carbon rigging has a super-tough, inherently smooth resin surface with a very low friction coefficient, which is therefore highly resistant to chafe – but most racing teams tend to visually inspect their rigging before, during and after each regatta for peace of mind.

Annual inspections are also straightforward and relatively inexpensive. The mast is left standing but often jacked down to unload the cables to allow a thorough visual check of the end fittings and spreader interfaces by a competent rigger, marine surveyor or Carbo-Link technician. Some racing teams who regularly push their rig close to its working load limits may have it professionally inspected more frequently. But even for the most demanding users, there is never any need to pull the mast out for a rigging inspection alone.

A common myth about solid carbon rigging is that it’s fragile in compression and prone to damage if the sails start flogging violently or, on those occasions, leeward rigging slackens. Absolutely not, according to Carbo-Link, whose cable terminations are designed to handle large bending moments and off-axis loads, and fatigue-tested by oscillating between buckling compression and full working load. For example, the 58m superyacht Ngoni’s solid carbon diagonal stays are designed to buckle out of line at 26kg (D2) and 19kg (D3); it would take a compression force of more than 45 tonnes for the D2 to fail and 40 tonnes for the D3.

Unlike some other types of rigging, solid carbon lends itself well to nondestructive testing procedures (NDT), which can be done on site with the mast fully rigged and even when it’s jacked up tight. Due to the rigging cables’ 100 per cent consolidation, an ultrasound NDT will quickly identify and accurately pinpoint any problems, something which cannot be done with bundled carbon cables.

‘Solid CFRP cables have a benefit in terms of the ability to inspect both in-situ and when dismantled,’ says Giles Waterhouse from Marine Results, one of the top riggers in the industry. ‘We use specific ultrasonic arrays to match the shape of the round or elliptical parts, enabling a full volumetric inspection of the cables. Using these advanced techniques, the parts can be evaluated for anomalies including voids, porosity, and resin richness. A baseline record of any findings is then made to enable assessment of the impact of such anomalies, and for future comparison in the case of a potential damage incident.’

Another popular misconception is that solid carbon rigging creates logistical headaches because it can’t be coiled for transport. The truth is that this is never a problem. New rigging is supplied uncured and coiled, to be cured on site prior to fitting. The curing process is simple, and can be done in any boatyard with three-phase electricity.

Once the rigging has been cured, all in accordance to the high quality requirements Carbo-Link has from their aerospace certification, and fitted, there’s no reason to coil it. When the rig comes down, the cables are simply stored on the mast and there’s never any need to send them away for repair or service.

‘You don’t have to send your mast away to be serviced,’ says James Wilkinson at Carbo-Link. ‘So why should you have to send away your rigging?’

The mast does need to be unstepped and stripped down for a full rigging service every five years or so, in accordance with the mast supplier or certification body’s guidelines. But even then, there’s no need to send the standing rigging off to be tested or serviced.

Any maintenance that may be necessary is easily done on site, which speeds up the servicing process, lowers the cost and reduces the amount of time the yacht is out of action. Because the rigging cables don’t have any sort of cover, they never need to be re-covered, which also reduces servicing costs significantly.

Torsional cables, such as furling foils, need more frequent attention than fixed standing rigging, regardless of what they’re made of. Carbo-Link advises removing the headsail and inspecting the lower end pin termination at least once per season, and checking it again after every major regatta or long-distance ocean passage. While the headsail is off, it’s worth testing for cable lag, with a crewman aloft to check the alignment from top to bottom.

It’s often assumed that fitting solid carbon rigging will tie you in to using specific rigging companies, but that’s another myth. ‘We have no defined contractors,’ says Wilkinson. ‘We are happy for owners, captains or project managers to use the rigging contractors of their choice. We’re happy to share information and technical details and to collaborate closely with any rigger that a customer wants to use.’

Accidents do happen when boats are raced hard, but solid carbon rigging has a remarkably high impact resistance. Local impacts remain local with no migration along the cable, as the crew of the Maxi yacht Rambler discovered in a mid-race collision that damaged their bobstay. ‘They called us and we helped them to assess the damage,’ says Carbo- Link’s rigging project manager Arne Guelzow. ‘They continued racing with soft-luff sails on the sprit without a problem. The bobstay was removed and repaired overnight – perfect for racing the rest of the week.’

Ease of repair is another major advantage. Like any other composite structure, Carbo-Link solid rigging can be repaired with standard boatbuilding skills and tools, using readily available materials. Carbo- Link’s technicians supply a repair schedule and repairs are made on site.

Yachts with tall masts are particularly vulnerable to lightning strikes. One more advantage of Carbo-Link rigging is that it significantly reduces the likelihood of a strike. The construction of the cables and their connection to the end fittings ensure low electrical resistance. With low-conductivity materials and an effective path of least electrical resistance from mast interface to chainplate, static charge cannot build up in the rigging.

To further reduce the risk of a lightning strike, a highly conductive copper mesh can be embedded in the surface of the cables – a solution that’s widely used in the aerospace industry. And in the unlikely event that the boat is struck by lightning, ultrasound testing can quickly determine whether or not any damage has occurred.

Is there a downside to Carbo-Link rigging? The initial cost is a significant investment but most of the perceived drawbacks are rooted in myth rather than fact. With rugged durability, a long service life, simple inspections and service, easy repair, fewer logistical hassles, less downtime and a potential reduction of overall cost in the long run, solid carbon has a lot more going for it than performance gains alone.

‘We want our clients to be confident when pushing their equipment to win races,’ Wilkinson says. ‘We feel this should be done without compromise in reliability, service requirements or increased cost at the expense of the client. Minimising service time and maximising sailing time is a key consideration for all our solutions.’