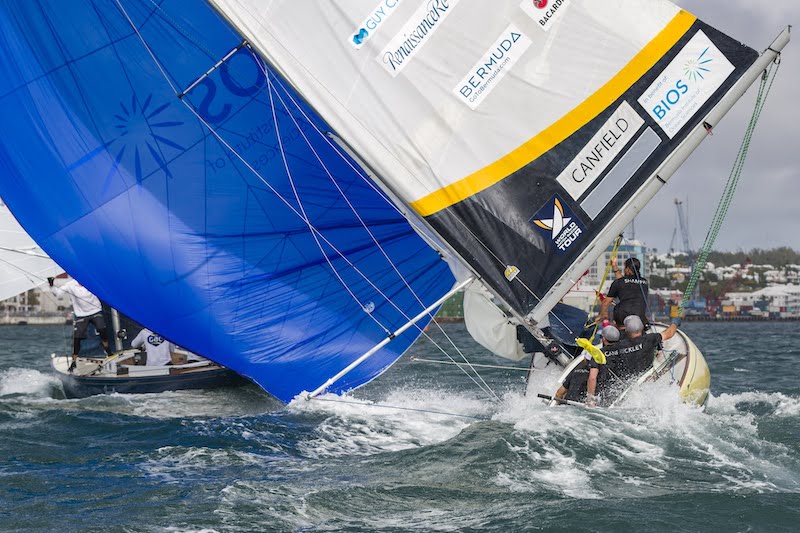 Canfield and crew won three of the four races in winds ranging from 12 to 20 knots on Hamilton Harbour. They showed grit and determination in clawing back from deficits and a killer’s instinct in laying penalties on Williams and crew. They also showed great boat speed when free and clear on the racecourse.

For Canfield the victory is his third at the Bermuda Gold Cup (2012, ’18) and second Open Match Racing World Championship (2013).

“It’s unbelievable. I can’t thank my team enough,” said Canfield. “I put us in a lot of tough spots this week and they got us out of almost every one of them. Thanks to Bermuda for getting us here. We’re excited to be out racing again, and to come away with a win is unbelievable. We’re thrilled.” 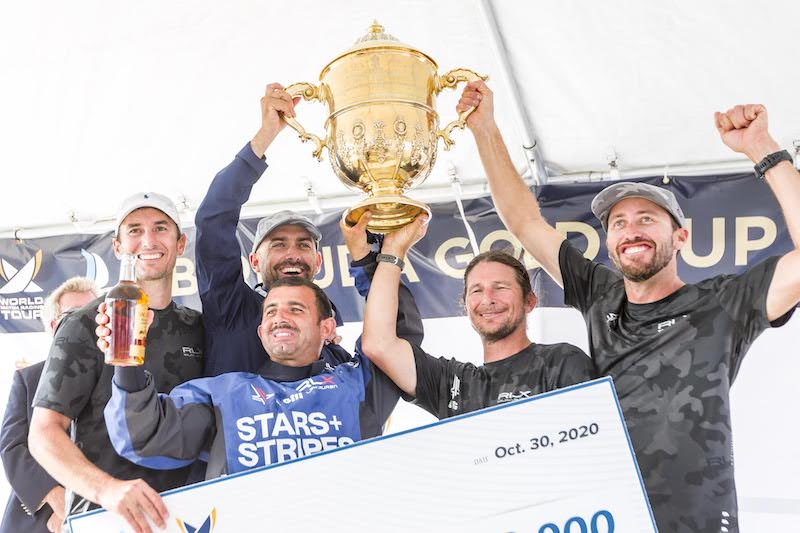 Williams and Team GAC Pindar – Christian Kamp, Gerry Mitchell and Richard Sydenham – placed second and won $15,000. Williams, the two-time Gold Cup champion and six-time Open Worlds champion took the loss in stride, but was rueful of the umpire’s calls, whose decisions had an impact on the outcome.

“It’s a lot about styles,” Williams said. “We try to keep the umpires out of the game and (Canfield) likes to bring them into it, and it worked for him today.”

At the awards ceremony after racing, dignitaries such as the Governor of Bermuda, John Rankin, Royal Bermuda Yacht Club Commodore David Benevides, the President and CEO of the Bermuda Institute of Ocean Sciences, Dr. William P. Curry, and the CEO of Bermuda Tourism, Glenn Jones, all spoke of how Bermuda has worked to contain and minimise the coronavirus pandemic. Everyone associated with the regatta was tested multiple times while on the island, and not one person failed the tests.

“We were able to prove to the world that we can host a professional sporting event safely and responsibly without sacrificing the action on the water,” said Jones.

They were on hand to witness the awarding of the Jordy Walker Trophy, recognising the most improved young match race sailor at the Bermuda Gold Cup, to 23-year-old Borch. Borch’s crew, including August de la Cour, Seabastian Pieters and Nikolai Rasmussen, placed fourth overall and won $11,000 in their first Grade 1 match racing regatta.

The Wedgwood Heritage Trophy, awarded in honour of Lord Piers Wedgwood, is presented to the sailor or support staff who best represents the traditional values and history of sailing. This year the trophy was presented to Tim Patton, who’s barge is a mainstay of the Bermuda Gold Cup. Asked for comment Patton replied, “When I’m done here, I’m taking the rest of the day off.”

From Williams’s perspective, the key point in the regatta was the pre-start of Race 2. Williams and Canfield had worked their way into the spectator boat crowd outside the pin end of the start line. Canfield was hounding Williams and got a penalty on him. 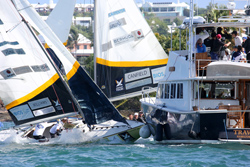 Damage was done to the bow of both boats as well as the commentary boat. Williams, who’d lost the first race, saw that as the turning point in the series. Not only did he receive a second penalty from the umpires, but he later was assessed a penalty of .75 points, which put him down 2-(-.75) after two races. That meant that he would have to win four consecutive races in order to win the championship.

“The big collision in Race 2 was the critical moment,” said Williams. “Not only was it a race win-loss on the penalty call, but also a lot of points on the collision. It’s essentially a 4-point delta. It was super critical. We’re not happy with it but you have to suck these things up.”

“The guys onboard were telling me to back off. I saw an opportunity and went for it,” said Canfield. “I hate hitting boats, but felt like there was no way to avoid it. He got another penalty and a three-quarter point penalty. Everyone makes mistakes and this time he made the mistake.”