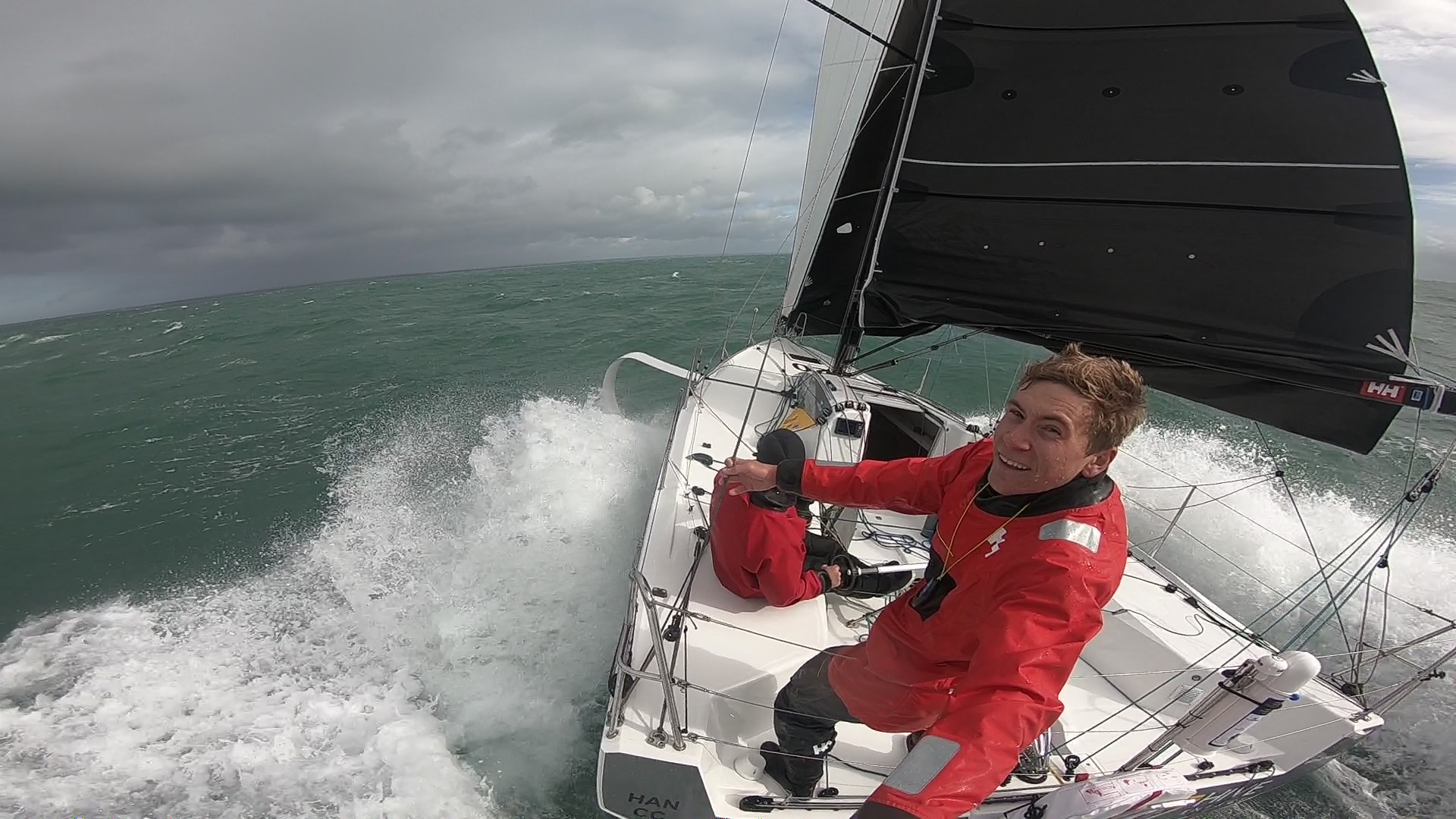 British sailor Will Harris has had a busy start to 2019.

Since he moved to northern France a couple of months ago to take delivery of his brand-spanking new Bénéteau Figaro 3 Harris has been flat out getting the boat commissioned and branded in its Hive Energy livery – to say nothing of learning how to sail this challenging new-breed of short-handed foiling one-design monohull.

We caught up with him in a rare moment of downtime to find out how it was all going.

YRL: Tell us a bit about the personal commitment of relocating yourself to France to mount this campaign.

WH: Solo offshore racing is what I have always wanted to do so when the opportunity arose to do a Figaro 3 campaign with Hive Energy it was a no-brainer to commit to it. I’m happy to say I was able to get selected for Pôle Finistère Course au Large – one of the best solo offshore training schools there is.

That of course meant moving to France. I got here the day before my boat did in January and ever since I have slept, worked and eaten either talking or thinking about the Figaro 3.

It’s a very exciting and cool environment to find yourself in, but for sure you need to find some moments to take a break from it too. Being a part of a professional group like this allows you to really focus in on the right stuff and helps you to be more productive around the things that are important for the campaign.

YRL: The launch of the Figaro 3 has been uniquely managed to ensure everybody got the same access to the new boat. Can you explain how that process worked?

WH: The concept of reinventing the Figaro class with a new boat has been in the works for at least three years now. As is with most one-design classes, everything has to be planned to the finest detail to make sure racing ends up as fair as possible.

For the 2019 season one of the key challenges was going to be controlling the amount of training time everyone got in their new Figaro 3’s before the racing season begins. There were 50 boats made available and built for the 2019 season and they all sold very quickly during 2018.

The allocation for theses 50 boats was made by random selection ‘live’ at the Salon Nautic boat show in Paris in December. Over the space of a two-week period this January, the 50 Figaro 3’s left the Bénéteau factory and were delivered to their new owners. So by the end of that month there were 50 new Figaro 3 owners.

Since nobody had done more than a few hours of test sailing in the prototype prior to getting their boats, everyone was left with a completely even amount of time to train and prepare for the season.

I received my boat on January 17 in Port-la-Forêt. It came by truck and it was a huge relief to finally see it arrive. I had watched two other boats get delivered just before mine so I knew how the process worked (which just added to my excitement).

They dropped off the truck with the boat strapped to the back the evening before, ready to be unloaded in the morning. That evening was the worst bit because you know the boat is there ready to start being prepared but you can’t do anything with it until the paperwork is all signed.

YRL: Tell us what was involved in getting the boat set up?

WH: As soon as my boat was unloaded it went straight into a nearby workshop. The through-hull fittings on the underside of the boat require some fairing to make them race ready – although you must stick to some very strict rules as to how much fairing you are allowed to do.

While this work is being done it is a good opportunity to begin preparing the rest of the boat while you are sheltered from the elements.

The boat comes with all the necessary fittings and ropes – you just have to work out where and how everything fits together. It was pretty overwhelming to begin with as the jobs list to get the boat prepared ready for sailing was pretty huge. The boat came with a manual on how everything should be fitted so I just tried to stick to that as much as possible.

Some of the other skippers had two or three people working on their boats, but I decided to prepare mine by myself. In hindsight that was a bit of a mistake. It took me three weeks non-stop working on the boat to get it ready to sail. Although it was great that I got to oversee every detail myself, having someone else there would have made the process much quicker. YRL: Tell us about the first day you went sailing on your new boat?

WH: The weather forecast for that day – as usual for January in Brittany – wasn’t showing to be less that 20 knots. I decided to just go for it and make the first sail a windy one. I had Shane Diviney – an experienced GC32 sailor – onboard with me helping out.

The objective of day one just to try not to break too much. We started sailing with the jib and everything seemed OK. So we put up the gennaker and bore away onto a broad reach.

You could hear the rigging loading up for the first time and we were pretty nervous for the first 30 seconds. But after that the boat just took off and we had a blast reaching around in 25 knots. After that I knew the boat was pretty solid.

YRL: What are your thoughts about the Figaro 3 now you have done some more sailing?

WH: One of the biggest things I noticed was how light and easy to steer the boat is. With a much more buoyant bow [than the Figaro 2], it feels like the boat glides over waves very easily and rarely does the nose stick into the water.

One challenge of the boat is its low profile. Inside the coachroof is very low and that makes it really tricky just to move around the boat – let alone drag a stack bag or sail around with you too. On the deck the low profile means you really notice how low down the deck gear – winches and halyard clutches etc. – is.

YRL: How have you approached the challenge of learning how to sail and get the most out of this brand-new design?

WH: Something I realised quite quickly was there simply was not going to be enough time before the 2019 racing season started to do all the boat preparation, training and testing that you would ideally like to do.
I have had to really prioritise what are the most important things to be working on at any one moment. Whether it be planning the season ahead, training on the water, analysing data, or – and this is an easy one to forget – simply taking some down time to recover physically and mentally.

I also believe you have to keep quite an open mind on how to sail these boats in short-handed mode. They are very different boats to the Figaro 2. In particular there is a big difference with regard to the sail wardrobe around runners and asymmetric spinnakers.

Another thing to note is that all the manoeuvres – tacks, gybes, hoists, drops – have had to be completely re-thought. It seems like everyone has different and very new ideas on how to do things.

YRL: Have you experienced any surprises?

WH: There has been some big differences between the design in sails by the different sailmakers. In particular the gennaker has been tested in a variety of sizes. There have been a few faults in the boats that we have had to deal with, but this was always likely to happen with a new production boat.

YRL: The Figaro 3 is the first production one-design class with foils – so what about those foils? What can you tell us?

WH: We have hardly brushed the surface so far on working out when the foils work best. In terms of foil control, you can alter the angle of rake and also how far in and out the foils are.
When the boat is going really fast downwind you can feel the effect the foils have. But upwind and at slower speeds this it’s much more difficult to work out the best settings. YRL: How does the boat compare with the Figaro 2 to sail?

WH: Single-handed the Figaro 3 is going to be much more physically demanding to race than the Figaro 2. But with the extra work you are rewarded with a boat that is really fun to sail.
The Figaro 3 has a more racing feel to it than the Figaro 2 and you can clearly see that in the design. But with that comes a reduction in the ease of use of the boat.

YRL: Talk a bit about your choice of sailmaker and what you are learning about sail configs/crossovers etc.

WH: I chose to take a set of sails from Doyle Sails for this season. Of the 15 boats in the Le Pôle Finistère Course au Large training group that I am working with I am the only one to be using Doyles at the moment. Most skippers have opted for either North Sails or [the French sailmaker] Incidence Sails.

It seems to be quite obvious where the crossovers are on all the sails expect the gennaker. These sails are very different in how how flat and how big the sail is – which also varies between the various sailmakers. I’m sure we’ll see a lot of development of this sail in the coming months.

YRL: Your first regatta is coming up and it’s a double handed event – the Sardinha Cup. Tell us a bit about that? What are your expectations in terms of a result?

WH: The first race of the season starts on March 30. The event is spread over three legs of racing around the Bay of Biscay with a cumulatively sailing time of about 10 days. In terms of short-handed sailing it’s a brutally long race to begin the season with – especially considering the main event, La Solitaire Urgo Le Figaro, is only two months afterwards.

This first event will really be the first testing ground between the various training groups across France. My goal is to not get too caught up/obsessed with this race. The overall objective for the season is La Solitaire, so I don’t want to go and exhaust myself and the boat in the first race of the season.

That being said, there has been some tough training here in Port-La-Forêt with some legends of the Vendee Globe taking part – so if we can go and beat a few of them I’ll be really pleased.

YRL: You have partnered up with experienced French ocean racer Eric Peron for that event. How did that come about? What is it like sailing with Eric?

WH: The partnership with Eric was formed through the Le Pôle Finistère Course au Large training group that I have joined for the season’s training.

Eric has been part of the training group for years and has done seven La Solitaire races himself. His experience is pretty clear when we are sailing the boat and really helpful to me when there is so much to learn about the Figaro 3.