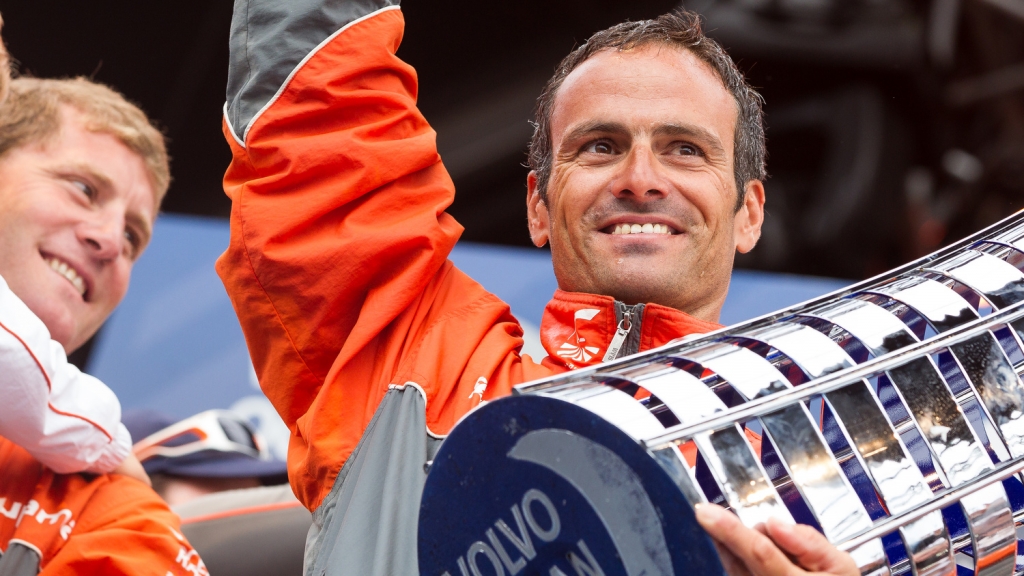 In 2012 French yachtsman Franck Cammas became the first skipper to win the Volvo Ocean Race at his very first attempt when he led the Groupama sailing team to a comprehensive victory in the round the world yacht race.

Cammas’ winning margin was such that when the Groupama crew arrived first into Lorient, France after trouncing the fleet in stormy downwind conditions on the penultimate leg from Lisbon in Portugal, celebrations erupted ashore as Cammas’ adopted home town welcomed back their world conquering hero.

Despite claiming victory before completing the final short hop of the race across the Irish Sea to Galway, Ireland (they won that one too by the way) Cammas’ men did not have an easy ride around the world. Nor had they looked like winners early on in the race.

On the opening leg from Alicante, Spain to Cape Town, South Africa they made a huge strategic error immediately after leaving the Mediterranean, choosing to take the direct route south along the African coast rather than heading west with the rest of the fleet in search of the northern hemisphere trade winds.

The decision dumped them to the back of the fleet and saw them finish days behind eventual leg-winner, Iker Martinez’s Telefonica.

However with three boats failing to finish – Abu Dhabi Ocean Racing and Puma Ocean Racing sponsored by BERG both with broken masts, and Team Sanya with a badly delaminated hull – the French crew was third into Cape Town. But the disappointing opening result was fooling none of the other competing skippers. On the opening night of the race they had each watched in creeping terror as the French Juan Kouyoumdjian-designed boat blast reached its way out of a distant sixth place and powered to leeward of the fleet and off into the lead.

The die was cast and the message was clear: the French had the fastest boat by far and if they could point it in the right direction they would be unbeatable.

After Cape Town the French boat was rarely out of the top three all the rest of the way around the world. Even when they broke their mast in the final week of the Southern Ocean fifth leg from Auckland, New Zealand to Itajaí, Brazil they managed to finish third after setting up a jury rig in Punta de Este, Uruguay.

Cammas has not led a campaign in the Volvo Ocean Race since his 2011-12 rookie victory, having traded ocean racing for the short course day races of the America’s Cup. Despite not disgracing his country in the 35th Cup in Bermuda in 2016, at the end of last year he finally gave up on trying to raise the money for a French campaign for the 36th edition in Auckland, New Zealand in 2021.

Now having partnered with Oman Sail to manage their European sailing operations – and in particular to help train two Omani sailors to a level good enough for them to compete on the highly competitive La Solitaire Figaro circuit – Cammas is reportedly formulating plans to mount a challenge for the 2021 edition of The Ocean Race (the new name for the former Volvo Ocean Race).

Oman Sail have been rumoured for several editions to have been interested challenging for the Volvo Ocean Race. Now, Cammas believes, the time is right for the Sultanate to make its move – possibly with a Dongfeng Race Team-style approach to introduce Omani sailors to the rigours of fully-crewed monohull offshore racing.

“We’d love it to be like that this time again. I think that a project like Dongfeng had fits in with what they have been doing for ten years. Particularly as today the Omanis have much more experience than the Chinese did when they started. There’s no reason why that should not work.” It is likely no coincidence that the reintroduction of custom built boats to the race has coincided with Cammas’ re-kindled interest in the race. In the Tip & Shaft interview he said that “the project has been under discussion for six months” – a couple of months after the announcement from The Ocean Race’s headquarters in Alicante that the 2021 edition would include a fully-crewed IMOCA 60 class for the first time.

“There are plenty of things that interest me in the next edition, particularly as there is the return to prototypes [custom builds], Cammas said, adding: “Even if I don’t necessarily think that choosing an IMOCA was the best idea, I’m very excited about the idea of building an excellent IMOCA.”

Just quite where the money might be coming from is not clear at this stage, but Cammas is talking like a man with a plan.

“We always want things to move faster, but in my mind, the strategy is well defined,” he said in the Tip & Shaft interview.

Nevertheless, with the next edition of The Ocean Race not scheduled to begin until the autumn 2021 Cammas says it will be later rather than sooner that we will see his boat on the water.

“I don’t want to say too much about it, as it might give some clues to our opponents,” he said. “I know there is an American project run by a few of the leading figures from Emirates Team New Zealand with a Verdier-designed boat, which is already underway.
“We don’t have the same strategy. Looking at the overall situation, we want to get our boat in the water fairly late on to take advantage of what we see going on over the next few months. Then, we’ll make our choices.”

Whether he will choose to work with Juan Kouyoumdjian who designed his winning boat in the 2011-12 race or opt for another one of the crop of IMOCA 60 designers currently in vogue is also not known.

“This year is going to be really fascinating with four different designers coming up with new IMOCA boats,” he said. “Often, there is one that comes out on top. It will be good to see [who] that one [is], as that will mean we will be setting off on good foundations.”

Cammas believes it will require an uncompromising approach to design a fully-crewed IMOCA 60 capable of winning the next Ocean Race.

“I’m convinced if we win […] it will be with a specific boat where no compromises have been made,” he said. “It will be easier to adapt a boat [designed for The Ocean Race] to do the Vendée Globe, than to move in the opposite direction.

Cammas has raced around the world singlehanded in large multihull boats but has never been involved in the Vendee Globe. Might he now be interested in giving that a go now, the Tip & Shaft interviewer asked.

“If there is a formula that works with the Volvo it would be logical to do the Vendée Globe afterwards, [but] not before,” came the reply.