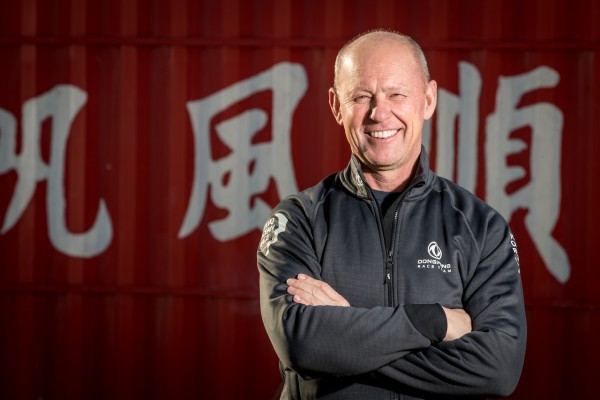 Bruno Dubois has an enviable track record in yacht racing both on and off the water with a Mini Transat win to his name along with world and European title victories in the Farr 45 class. He was the skipper of French entry Rucanor Sport in the 1989-90 Whitbread Round the World Race and the team director of Dongfeng Race Team in the last two editions of the Volvo Ocean Race.

No surprise then that he was an invited guest at the 2018 Yacht Racing Forum in Lorient, France this week on a panel discussing the future of the IMOCA class and the upcoming merger with the Volvo Ocean Race.

Here is the pick of what we heard him say.

I have worked all my life on these two classes and now they are merging, and I think that is pretty cool.

That said, I prefer to be in my place than that of Antoine [Mermod, the IMOCA president]. He has a lot of challenges in front of him because it is not only the boats that we are merging but the mentality [of two distinct groups] of sailors. I can tell you that they are very, very, very, different sailors.

Having said that I know the Volvo Ocean Race sailors very well and they will try no matter what to build a boat specifically for the Volvo Ocean Race. And that boat will be a different beast – like Charal is different than a 2007 boat. There will be a difference and I think that’s where I think the challenge for Antoine is going to be quite interesting.

I think we should all help him – that’s what I’m trying to do as much as I can – but I know it’s not an easy one because he is on the spot. I hope it is going to work fine but I know if I have a sponsor for the next Volvo Ocean Race I will design a boat for that and not for the Vendee Globe.

On the reduced crew numbers for the next Volvo Ocean Race

Just looking at the crew aspect: a crew of five – so four men and one woman, for example.

Talking to our navigator Pascal Bidegorry yesterday he told me that the work of the navigator will not change [from the VO65 to the fully crewed IMOCA 60]. He said he will stay as much as he can behind his chart table. Which brings us to four crew: three men and one woman. For the Anglo-Saxon world this is not a crewed race any more.

So those are the things we need to address and say: “Guys, the world is changing”. In the same way that we have to explain to the Star sailors and Finn sailors that now we have foiling kites in the Olympics.

The world is changing and either you fight it, or you embrace it. I’m too old too old to fight so I’m going to embrace it – that’s the best way to go.

On the budget required to win the last Volvo Ocean Race

We had a budget of 14 million Euro with Dongfeng the first time [for the 2014-15 Volvo Ocean Race (in which they finished third)]. The objective was to be in the top three – it was in our contract (the Chinese put things like that in the contract).

The second time the main objective was to win – there was no place for second.

It was an amazing challenge to take on, but the budget went up to 21 million Euros. When I explained to them it had to go up to 21 million, it was because we needed more support and we needed to understand more things – for example we needed a navigator like Marcel van Triest sitting in Gothenburg a week before last leg to understand the different routes that you can take [to the finish in The Hague]. That can work or not work but it seems like that worked for us last time.

On the expected budget for the next Volvo Ocean Race

The budget [for the next race] will be higher than last time. If you really want to be a top team you go to Concarneau, speak to Bilou [French sailor, Roland Jordain], buy his boat (the ex-Safran) and train for a year.

Then you build a new one with a full design team. You also buy a 65 and train with that to make sure you have the next generation coming through. If you commit to two editions [of the race] it’s about 50 or 60 million Euros.

A lot of the costs come not from the boat but from the time you spend training. In the last edition [of the Volvo Ocean race] Brunel came in April or May and we had already spent time in Sanxenxo training with MAPFRE. That stuff costs money and there is nothing you can do about it.

When I started there was a place on an 18-man boat for a youngster coming in to just clean up the bilges and be there to learn. There is no place anymore now for those guys – or girls – on the fully-crewed IMOCA 60.

For me bringing back the 65 is the only way to make sure that young people are coming into the race.

[On the Dongfeng campaigns] I have seen how hard [Volvo Ocean Race] sailors like Charles Caudrelier or Stu Bannatyne push the boats compared with [an IMOCA sailor like] Jérémie Beyou.

In one situation three boat lengths behind Dongfeng there was MAPFRE and they are pushing. Jérémie says “It’s too windy, just ease the sheet, relax, I’m a Vendee Globe sailor and I need to protect my boat to make sure I finish the race.”

Charles turned around with Pascal Bidegorry and said “No don’t do that. Those guys are just two boat lengths behind me.”

So, if you ease, you are a pussy. That’s the way Volvo Ocean Race sailors are working on the boat.

That is the whole challenge with the new boat. The decision to keep the one-design mast [widely considered to be the weakest point on the IMOCA 60 yachts] has been made so the guys will have to change the way they sail.

On the female sailor rule

It’s not easy explaining it to the guys I can tell you. When we talked with the skippers from the last race about the idea of five crew on the IMOCA 60 none of the guys were thinking to bring a woman.

So it’s good to put that in as a rule because otherwise there would be no way [female sailors would be chosen].

I’m not competent to say myself, but Kevin Escoffier who is a good enough sailor and engineer to understand both worlds, says that you can take a future Volvo/IMOCA boat and you modify it to race in the Vendee Globe.

He says it will probably be a bit stronger [than it needs to be] and it will probably not be the optimum boat to win the Vendee Globe, but you will be competitive enough to be in the top five.

He also says the opposite route [adapting a Vendee Globe IMOCA 60 for a fully-crewed Volvo Ocean Race] will be a bit more of a challenge.

Kevin told me all this before the end of the Volvo. Now perhaps after studying what Antoine [Mermod, the IMOCA president] has been doing he might be changing his point of view.