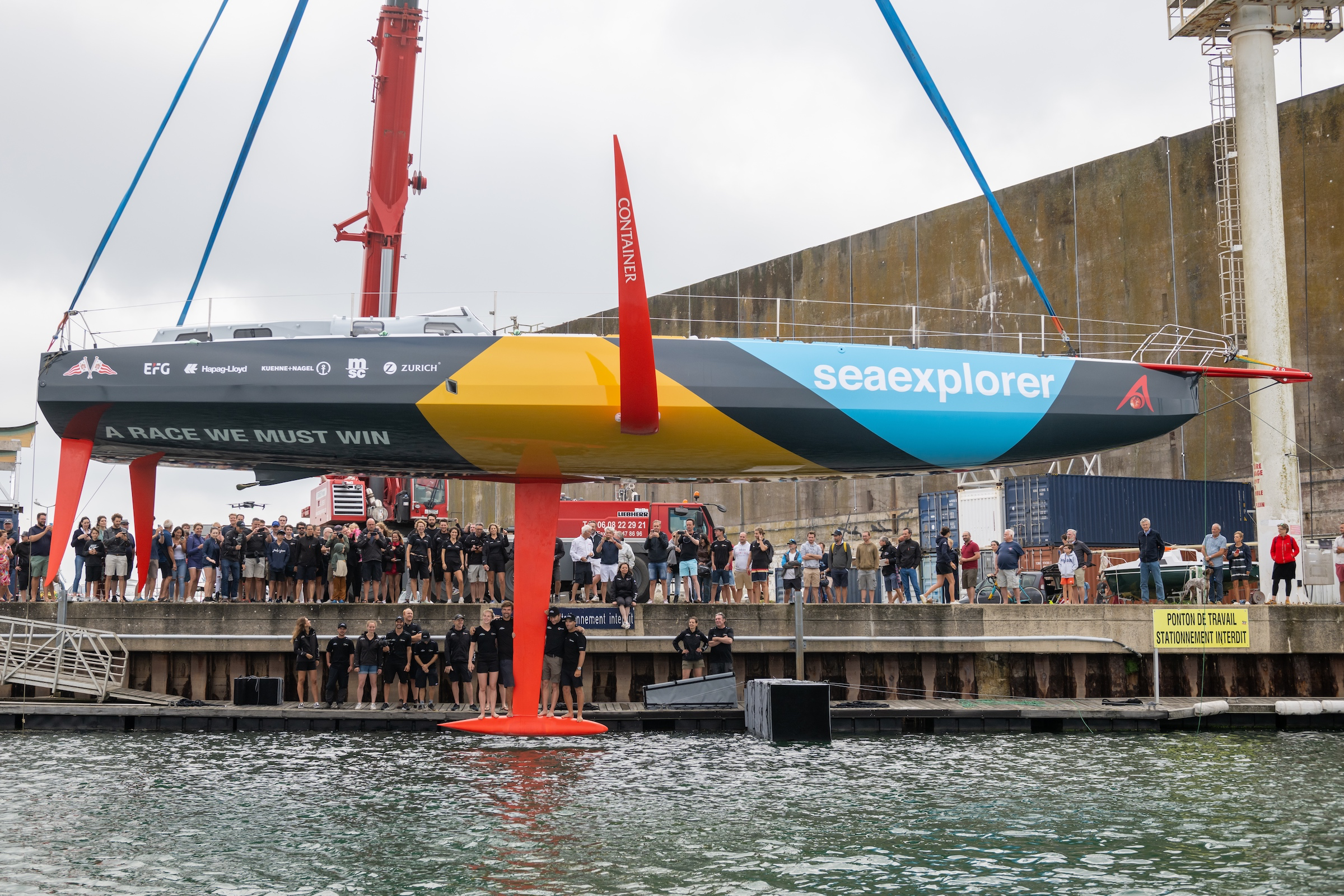 Boris Herrmann’s offshore sailing team launched its new race yacht on schedule today after 18 months of innovative design and construction. With its spoon bow and chistera-shaped foils, the Malizia – Seaexplorer and the international team are ready to race again, both in single-handed and crewed regattas around the world, whilst continuing their mission of raising awareness for climate protection.

35,000 design hours, 45,000 man hours in the build, over 250 people involved in and outside the team. This is what it took to build Team Malizia’s new IMOCA race yacht, Malizia – Seaexplorer, which was launched on 19 July 2022 in Lorient, France. “The team is extremely proud of having launched the boat on the foreseen date. I believe it is a first in our industry to announce a date a year before and deliver exactly on time”, comments team skipper Boris Herrmann. “We put tremendous management and team effort to make this happen.”

With its new red 4,5 m long keel and chistera-shaped foils attached, the Malizia – Seaexplorer was rolled out of the hangar by the team and craned into the harbour of Lorient this Tuesday morning under the excited eyes of a large number of spectators. Once the 18.28 m long hull touched the water, the technical team started to install the IMOCA’s 27.30 m long mast and its two outriggers.

On seeing the boat touch the water for the first time at Boris Herrmann commented “It is incredible to see all the hard work that the team have put in over this last year paying off – so a big thank you to all of them and also to our partners for making this dream a reality. I cannot wait to get back on the water and sail on this amazing machine!”

Amongst the crowd were those who have put hundreds of hours into building and designing the boat. Joining them were some of those who have been backing the team for years, such as team founder Pierre Casiraghi, Vice President of the Yacht Club de Monaco, Otto Schacht, Executive Vice President Sea Logistics at Kuehne+Nagel, Veit Enders, Managing Director of SCHÜTZ – memorialising this magic moment.

Unlike many other IMOCA teams, the Malizia – Seaexplorer yacht is not a billboard for a single brand but carries the United Nations Sustainable Development Goals wheel and the team’s slogan “A Race We Must Win – Climate Action Now”, with the aim of creating awareness and inspiring ambitious climate action. Team Malizia and its seven main partners EFG International, Zurich Group Germany, Kuehne+Nagel, MSC Mediterranean Shipping Company, Hapag-Lloyd AG, SCHÜTZ, and the Yacht Club de Monaco are united through this common mission.

Designed by VPLP, the construction of Malizia – Seaexplorer was carried out at Multiplast in Vannes, France, over the past 12 months. The technology and craftsmanship that went into building this boat are some of the most advanced in the field of engineering. “Learning from our experience in the past 4 years and in particular the Vendée Globe 2020-21, we wanted a boat that can maintain high average speeds even in rough sea conditions. Therefore, together with the architects from VPLP, we chose softer and rounder hull lines and a curved bow. We also made the boat even more solid than the previous one and completely redesigned the ergonomy and living space”, explains skipper Boris Herrmann.

The Future of Team Malizia

Boris Herrmann will participate in the Route du Rhum this November, the first real test of the new boat across the Atlantic from Saint-Malo to Guadeloupe, and his first single-handed regatta since the Vendée Globe. During The Ocean Race 2022-23, he will sail on Malizia – Seaexplorer with co-skippers Will Harris, Rosalin Kuiper, and onboard reporter Antoine Auriol. This 6-month round the world team challenge starts mid-January from Alicante and will be another test of the new boat, this time in the rough conditions of the Southern Ocean – with the ultimate goal of the Vendée Globe 2024-25 in sight.

With the Ocean Pack, a mini-laboratory installed on the team’s previous boat and now also on their new boat, Team Malizia will continue to collect ocean data such as sea surface CO2 levels both during races and deliveries. This valuable data, which is scarce in remote places like the Southern Ocean, helps marine scientists understand and monitor the health of the oceans.

The boat, which sails under the Monaco flag carries the new sail number 1297, representing the year Francesco Grimaldi conquered the Rock of Monaco. The boat will be christened during the Malizia Ocean Festival on 6 & 7 September 2022 in her home port Hamburg, where skipper Boris Herrmann lives and Team Malizia is based.