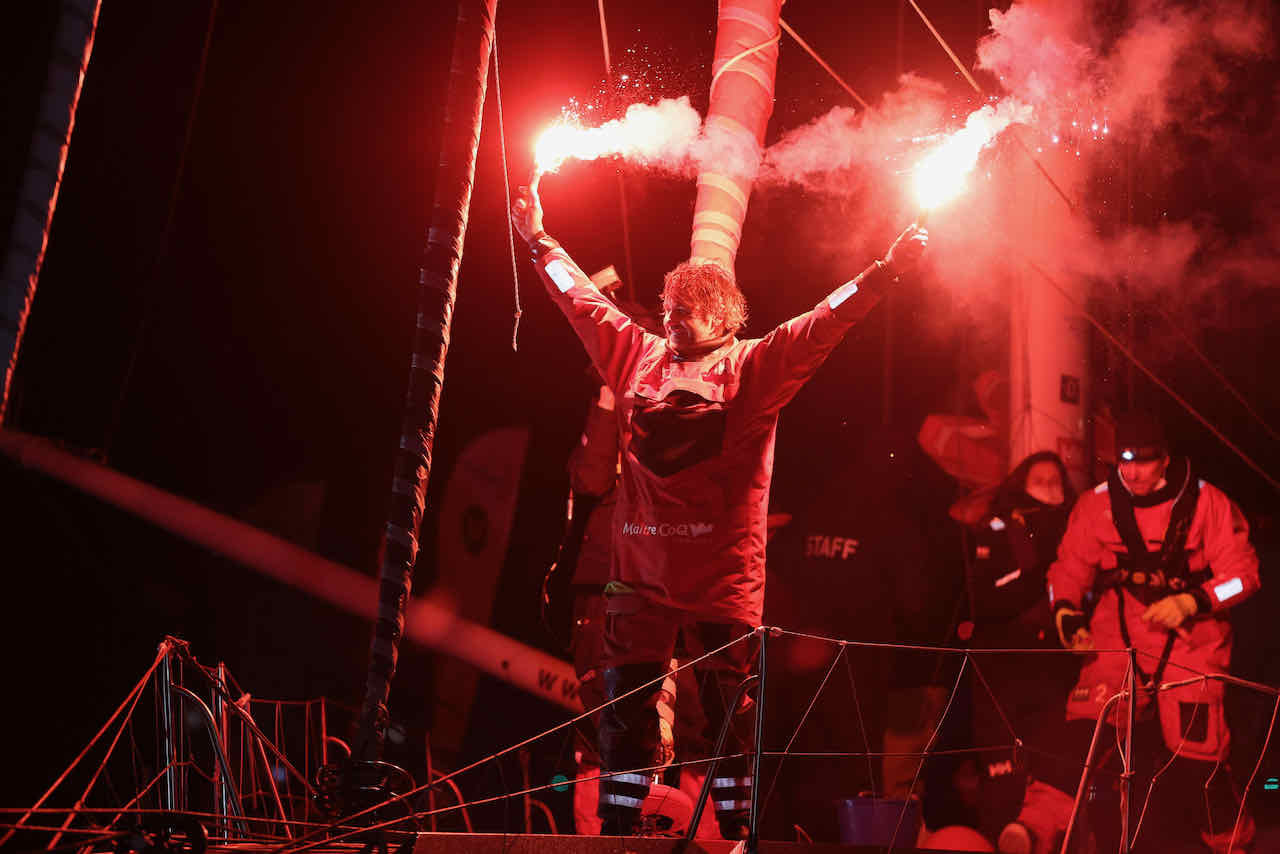 Bestaven was the skipper to finish – following line honours winner Charlie Dalin on Apivia and Louis Burton on Bureau Vallee – but because of his time compensation of 10 hours and 15 minutes, awarded by an international jury for his role in the search and rescue of fellow competitor Kevin Escoffier, Bestaven was awarded the win by two hours 31 minutes and one second over Dalin in second and by and six hours and 46 minutes over Burton in third.

Bestaven finished his 24,000-mile circumnavigation in drizzly rain, surging in on a two-metre swell in 20 knots of westerly wind. Later in the Les Sables D’Olonne channel local well-wishers lined their balconies and the streets to acclaim the newest winner of the Vendee Globe.

Although not tipped as a potential winner before the race Bestaven excelled on his first time visit to the deep south. In the Indian Ocean he passed Australia’s Cape Leeuwin in third place, and then after an impressive performance in the Pacific, rounded Cape Horn with a 15-hour lead on the chasing pack.

A smart climb up the South Atlantic saw him pull ahead by 440 nautical miles (nm), before spending three frustrating days all but becalmed south of Rio as he watched his lead evaporate in the sweltering Brazilian sun.

But the skipper from La Rochelle on the west coast of France – an engineer as well as professional skipper – proved his race winning credentials as he fought back into contention by the Azores. His final key move proved to heading north as he crossed the Bay of Biscay on the heels of a low-pressure system. His long, faster, more direct track into Les Sables d’Olonne over the last 24 hours helped him hold his time to take the outright win.

Over an ocean racing career spanning nearly 20 years Bestaven has tasted success in the Mini class – winning the Mini Transat in 2001 – and then in Class 40 where he twice won the Transat Jacques Vabre.

But he was one of the first to be forced out of the epic 2008 Vendée Globe when he was dismasted on the Bay of Biscay less than 24 hours into the race. He took his time to return to the Vendee Globe with a well-prepared programme which saw him put together a small, hand-picked team of specialists from all fields, including the America’s Cup.

Bestaven is also a successful entrepreneur who owns and runs Watt & Sea, a company which develops hydro generators fitted to most of the competing IMOCAs.

Although, in the 2015 VPLP-Verdier designed Maître Coq IV which was built as Safran, his boat is not one of the latest generation foilers, he was able to maintain high average speeds in the south and remained competitive in more moderate conditions.