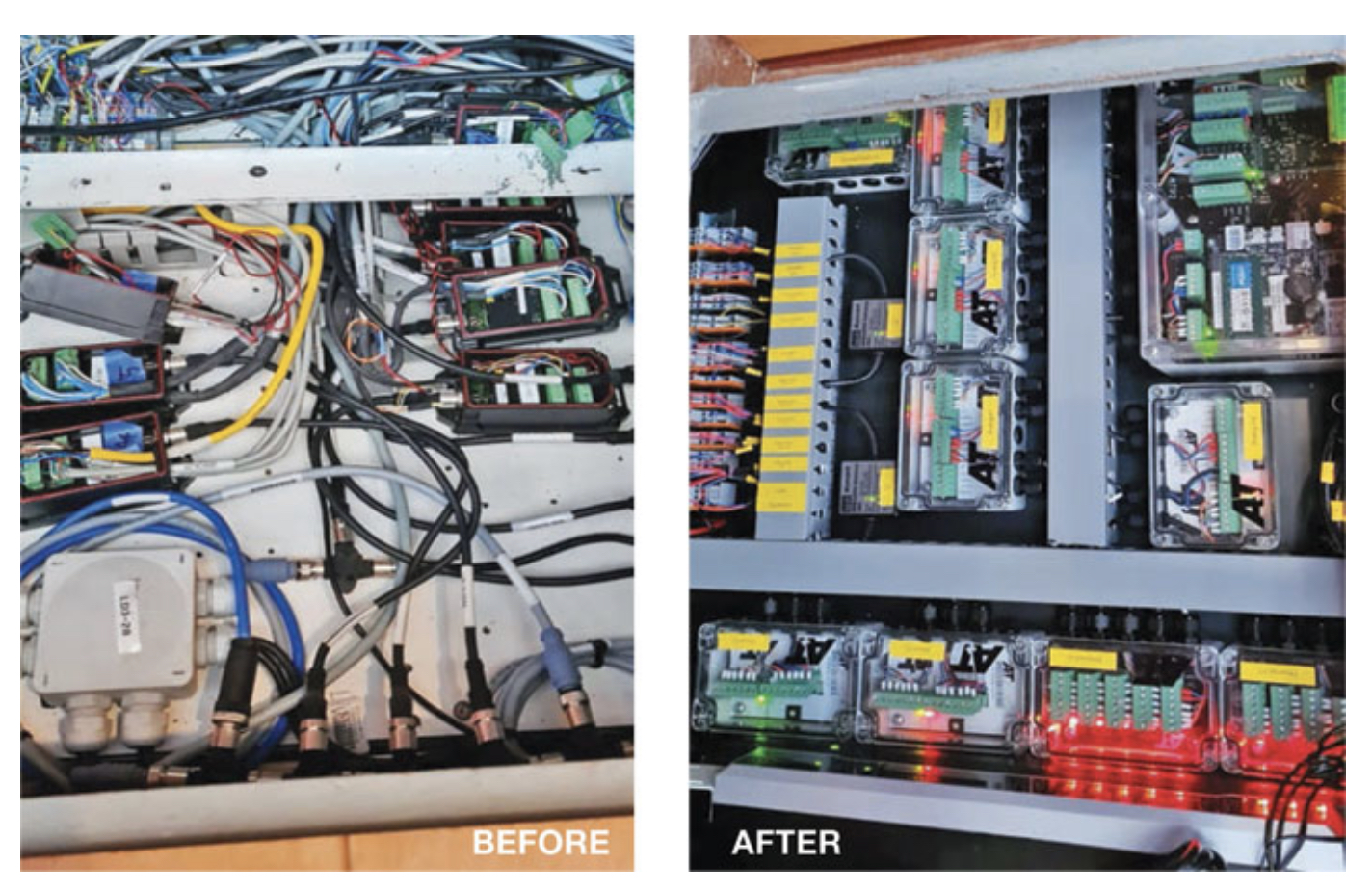 When yacht instruments start to reach the end of their life or a lighting strike forces the issue it is tempting to think only of throwing them away and starting again. A+T has turned this on its head by offering upgrade paths which give the best performance, are superbly engineered, often cost less and do not involve throwing away good working parts and cabling.

A+T products are all repairable at component level and A+T also repairs all older marine electronics, again at component level. Contrast this with other instruments on the market which comprise sealed units or for which parts cannot be obtained, so can only be completely replaced, with parts then ending up in landfill.

A further consideration is that almost all A+T parts are made in the UK with manufacture and design in the same place, so cutting down on supply chains and associated shipping. This has the additional benefit of keeping stock levels of finished parts available for shipping worldwide.

A+T processors and pilots are designed and engineered to the very high standards by a team that includes sailors at the top end of the sport. It is not a surprise that five of the seven class winners at the recent St Barth’s Bucket Regatta and two yachts on the line honours podium in the Caribbean 600 were equipped by A+T. More than 400 superyachts and race boats are now using A+T in various stages of their upgrade programmes.

A wide range of A+T displays are available to upgrade existing systems, with A+T being well known for making the clearest and largest colour displays on the market. Again, these come with interfacing that allows them to be used to enhance existing systems. Recent examples of this include fitting the large colour Big Format Displays (BFD) to Oui Fling, a Spirit 52D that runs an H5000 processor and the ClubSwan 50 Stella Maris, which runs a FaRo processor. Like all A+T products, these displays are backed by five-year warranty.

Upgrade projects can use the yacht’s existing cabling with no loss of performance so saving huge amounts of time, cost and replacement cables. On new builds A+T is being installed with an increasing number of large projects using a single Ethernet cable around the yacht, linking all sensors and displays; again, saving on copper, cable and weight. Some yachts are even choosing for this to be done with fibre optics.

A+T upgrades can use all existing sensors, where these are working fine. Where existing sensors are failing, then in almost all cases A+T makes parts and replacements for them. Examples of these include the gate valve (shut-off valve) systems used on many large sail and motor yachts, and now wind sensors. Spare parts for the many, many thousands of 213-type wind sensors supplied to yachts since the 1980s have dried up from the original manufacturer. A+T makes new and improved parts for all of these, again saving very substantial cost and time for the yacht and unnecessary waste.

A good example of an upgrade incorporating many aspects mentioned above is the upgrade of the 62m schooner Athos. Over several years some failing displays had been changed out for A+T and then, in 2021, a failing WTP system that could no longer be supported. A surgical change-out to an A+T processor was done in just a few days by Osprey Technical Consulting.

This is a complicated system with two wind sensors, 35 displays and a large number of load-cells and other sensors. A year later the yacht is now at Royal Huisman for refit and is changing more displays and replacing underwater sensors with A+T shut-off valve units sensible for a boat of this size. This shows how a yacht can be upgraded to an entirely new and well supported system in stages if needed.

Plenty of captains, engineers and project managers are discovering that an A+T upgrade is the most cost effective and best way forward including the well-respected project manager Tim Bright who recently said: ‘I have known Hugh and the A+T team over a number of years. For both refit and new installations I have been extremely impressed with the product adaptability, quality and service.’ They can also be confident that this approach is also the best for sustainability.