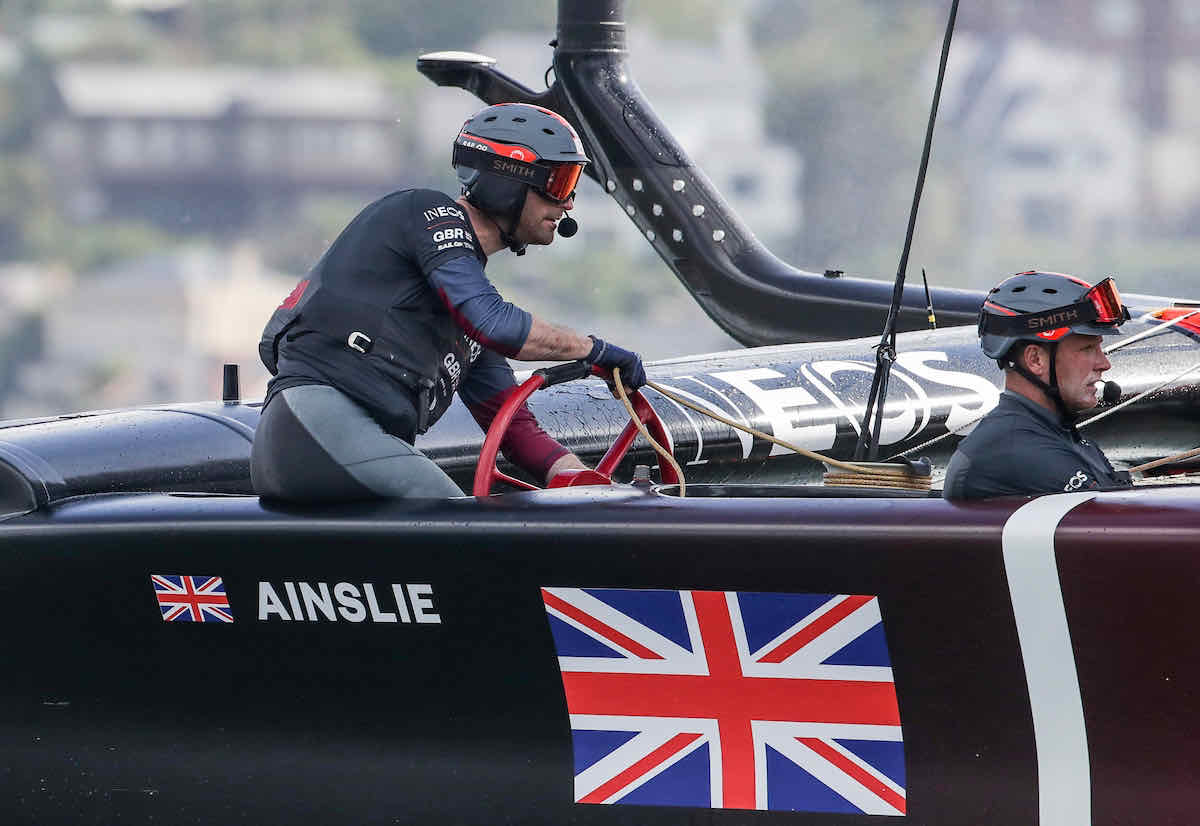 In this second installment of an exclusive interview this week with the British SailGP and America’s Cup skipper, Yacht Racing Life editor Justin Chisholm finds out:

Ben Ainslie will make his return as skipper of the Great Britain Sail GP team this weekend in Aarhus, Denmark after stepping down for two regattas on paternity leave following the birth of he and his wife Georgie’s second child – their first son, Fox.

Despite his parenting duties Ainslie of course found the time to follow the SailGP events in Italy and the UK – watching the regattas unfold along with the rest of us sailing fans via the global circuit’s official online channels.

How had he found the experience of watching rather than competing?

“Sailing coverage has come a long way, hasn’t it, since 10 years ago when we start started with the foiling boats in the Cup – the graphics and Live Line and so on. I think that balance between what is good for your hardcore sailing fans and what’s good for your lay person is always a tricky one to get right. I think that is going to require fine tuning as, as the league develops.

“I think the commentators are trying to find a natural flow. Freddie Carr is fantastic because of the energy that he brings and then someone like Matt Cornwell has a very different character to Freddie – but in a way I think they complemented each other.

Did Ainslie think the coverage effectively communicated the pressure and excitement the competitors feel fleet racing hyper-fast flying catamarans around a confined racecourse?

“I think it does,” Ainslie replied. “It’s not unique, but I think the great thing is the onboard audio. There aren’t many sports where you can listen to this sort of mini soap opera that’s taking place on board. I think that that’s really something that can be developed further because emotion is what people love and you can get a better idea of the tensions, the stresses that the sailors are under.

“Of course, it’s really hard to communicate the physical pressures that they are under. Not only in terms of grinding and so on, but the speeds the boats are going, the G-forces in the manoeuvres and so on. It’s quite hard, I think, to get across to people just how full on these bags are to sail.

“The other thing that is, you know, the difference between watching on telly [TV] as opposed to being on the boat is the additional vision that you have of the rest of the fleet. As we saw with the crash between Japan and USA.

“Those are two really experienced teams, so we know that wasn’t just a stupid mistake – it was the fact that visibility is not that great on these boats. That makes it that much harder again to be racing at those speeds and be struggling to see what’s coming at you.”

It is not hard to see the benefits of an America’s Cup syndicate like Ainslie’s Ineos Team UK branching out into another high-performance league like SailGP. But, for now at least, Ainslie is keeping the AC and SailGP teams as separate organisations.

“It’s very useful for the Cup team to be able to race in SailGP,” he said. “That’s ultimately how we’re going to get our race prep and keep current as racing sailors. Other than that, there isn’t any crossover at the moment. That’s not to say it might end up being so down the road, but not right now.

Ainslie said it was no surprise to him that there has been an influx of big-name America’s Cup sailors – the likes of Jimmy Spithill, Peter Burling, Blair Tuke, and Francesco Bruni joining Nathan Outteridge and Tom Slingsby – to SailGP this season. However, the existing nationality rules prevent, say, another American team joining the circuit.

“We have certainly seen more and more Cup sailors come across since we got involved in Sydney 18 months or so ago,” Ainslie said. “Many of those sailors could be involved in the next America’s Cup – so there would be crossover in that way. But in terms of teams, it’s the availability of a team franchise that would limit that.”

Turning to the 37th America’s Cup, Ainslie agreed that this week’s update from Emirates Team New Zealand CEO Grant Dalton probably meant the next edition would be held in another country – although an Auckland Defence had not yet been completely ruled out.

“As far as I understand the door has not yet shut on Auckland or New Zealand,” Ainslie said. There are three – a handful – of other options on the table. So, it’s really down to Dalts [Grant Dalton] and to New Zealand to make that decision.

“He’s a hugely experienced campaigner. Clearly, he’s got to think about the finances and what’s right for that team competitively. At the same time, he has got to balance what’s going to be the best venue for the Cup and for the competitors – both from a racing perspective and a commercial perspective. The team is hugely experienced, so I expect them to find that right balance and make the right decision.”

As is the cold hard reality of the America’s Cup, despite Ineos Team UK’s enhanced relationship with the Defender Emirates Team New Zealand as Challenger of Record, Ainslie did not expect to be part of the decision-making process regarding the venue.

“It’s like a RACI Chart, isn’t it?” he said with a wry smile. “I think I’d expect to be consulted on the decision, but I don’t think we’re ultimately will have any responsibility in it.”

While this may not come as a surprise, Ainslie’s response when asked if a bid to host AC37 in Portsmouth/The Solent/Cowes was one of the three shortlisted foreign venues still under consideration, his answer was: “That’s unlikely.”

Like many syndicate heads Ainslie would not be disappointed if the 37th America’s Cup returned to Auckland, New Zealand – particularly if the alternatives included “some venues which we would probably rather not go to”.

“I thought New Zealand was fantastic – a brilliant event. We all love going down there. The great thing is that sailing is such a huge part of life in New Zealand. So I’d be very happy if the Cup was back in Auckland – or in New Zealand – again.

“I know Jim Ratcliffe really enjoyed his time down there. I know you will have seen the Ineos tie up with the All Blacks. So we have some strong ties with New Zealand. But it’s kind of a moot discussion, because it’s just not anything we can influence really.

“We will support the Defender as much as we possibly can – with the interests of the event in mind, as a challenger.

Wherever the next Cup is held, everyone would love to see some new teams join the fray. For his part Ainslie believes some moderate growth is possible for AC37.

“I would certainly hope to see some new teams,” he said. “We have had four teams in the last Cup, and I don’t think anyone would agree that’s enough teams. I don’t think we’re going to suddenly jump up to double figures in one cycle, but it’d be great if we could see, six or even seven teams. I think that’d be a really decent result.

“Hopefully, now that potential teams have seen the AC75, they have got more confidence in the boat and the fact we’re sticking with the same class of boat again makes the whole thing more achievable. They can relatively quickly, either pick up a second cogeneration both from the last cycle, or source some designs that will get them reasonably on the pace. That makes it a lot less of a daunting challenge than it was for AC36 and I’m hopeful we’ll see more teams.

Whether or not Ainslie would sell a fledgling syndicate his team’s second AC75 from AC36 was, he said, dependent on what gets defined in the AC37 Protocol.

“We’re open to trying to help new teams come into the cycle,” he said. “If we could do it without compromising our own competitive position, we might be open to that.

Commenting on the announcement this week from American Magic that the US team had appointed Scott Ferguson to lead its design effort for the team’s challenge for 37th America’s Cup, Ainslie said he thought it was a very smart move to retain Ferguson.

“Scott is a huge talent, a big name in yacht design and in the Americas Cup. I worked with him when I was at Oracle for the 2013 Cup, so I know him well – a really good guy. That’s a smart move from American Magic.

Might we imminently expect a similar announcement from the British syndicate?

“Regarding our team, we haven’t been standing still,” Ainslie said. “We’ve been working hard in the background and, yes, you can expect to see updates from us in the near future.

Looking ahead to the SailGP event this weekend Ainslie said he relished the thought of getting back on the racecourse, albeit at a venue he has never raced at before. The British crew go into the two-day Danish event tied on points at the top of the leaderboard with Tom Slingsby’s Australian team.

So there is everything to play for, but Ainslie cites lack of practice compared to other teams and some ring rustiness from him as mountains for the Ineos team to surmount.

“We are going to be down on practice compared with some of these other teams, which always makes it harder,” he said. “And of course, I missed the last two events. So I’d say I’d say we are up against it.

“But we’ll always be out there to try and get a win. I think it’s important to try to consolidate a little bit with the changes that we have had to make for the last few events and regroup really. The forecast for the next few days and over the weekend is offshore winds, so it could be pretty shifty and so it could be quite dynamic racing.

Whatever the conditions Ainslie confessed to really loving racing on the SailGP circuit.

“It really is great,” he said. “There’s a balance involved in making it a success commercially, but from a racing sailor standpoint it is just is about right. I just hope that that league can main maintain that balance, because the racing that we’ve had, you know, so far that I’ve been involved with has been really standout.”