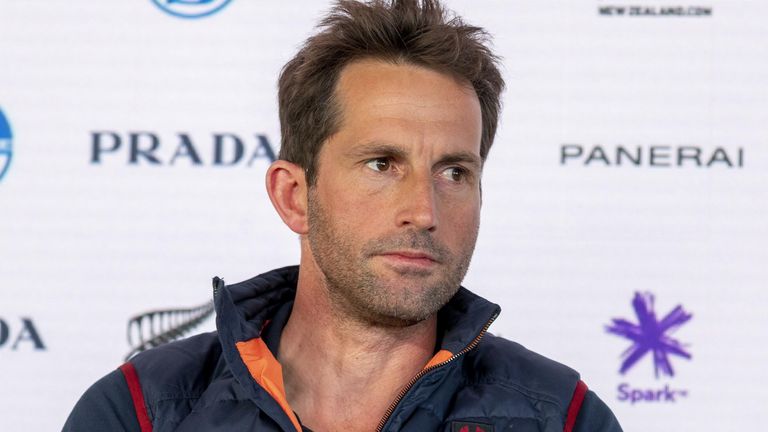 Ben Ainslie is champing at the bit to get back behind the wheel of the Great Britain SailGP F50 catamaran this weekend in Aarhus, Denmark. He missed the last two SailGP events in Italy on paternity leave as his wife Georgie gave birth to the couple’s second child – a baby boy they have named Fox.

Goodison – who Ainslie says did a great job, especially given the very limited practice time available to him on the F50 – finished sixth in the light winds that prevailed in Taranto, Italy, and fourth on the more familiar waters of Plymouth Harbour on the English south coast where delighted the home crowd by closing his account with a comprehensive victory in the event’s final race.

Ainslie confessed it was hard to have to miss the British event – especially as some balmy British summer weather and good event organisation made it one of the best events of the international circuit’s second season.

“Yeah, that looked amazing,” he said wistfully. “A great turnout on the Hoe. Racing on home turf/waters doesn’t get much better than that. So yeah, I missed out on it – but for good reasons.”

Given the limited pool of British sailors with the experience and ability to take charge of the ultra-high performance SailGP foiling catamarans, Goodison – who at the 36th America’s Cup in Auckland, New Zealand raced as mainsheet trimmer for the rival USA syndicate NYYC American Magic – was an obvious choice to stand in for Ainslie.

Ainslie said other candidates considered were Dylan Fletcher (helmsman of the Great Britain SailGP Team in season one) and Giles Scott – Ainslie’s tactician at the last America’s Cup. However, both were tied up with their Olympic campaigns at Tokyo 2020 where they each came home with gold medals in the 49er and Finn respectively.

Many British America’s Cup fans – me included – would love to see Goodison racing alongside Ainslie in AC37. Might that now be on the cards after Goodison’s two-regatta spell with the British SailGP team?

“Not really, at this stage,” Ainslie replied. “I think that Paul certainly impressed the guys on the team. All I have heard is good comments on how he fitted in with the team and his approach. Obviously, he has the skill set and all the rest of it in terms of experience. But we really need more agreement on where we’re going with the class of boat, and number of sailors on board, and all these sorts of things before we can really home in on our final sailing squad [for AC37].”

As sailing’s most successful Olympic sailor it is no surprise that Ainslie was also cheering on the British Sailing Team’s stellar efforts at the Tokyo 2020 Olympic regatta in Enoshima, Japan where they finished the regatta as the top sailing nation.

Along with the aforementioned golds for Fletcher (crewed by Stuart Bithell) and Scott, the Brits won bronze in the women’s windsurfing, silver in the Nacra 17, and collected a gold in the 470 women for Hannah Mills and Eilidh McIntyre.

Ainslie had nothing but praise for the British Olympic medallists for their ability to deliver on their status as favourites at what he said from his vantage point appeared to have been a very difficult event for all the competitors.

“From the outside it looked like it was a very difficult event for everybody,” he said. “Not only because it was delayed by 12 months, but also not having spectators or family or friends around like you normally do for an Olympics I think also added to the pressure of the whole thing.

“The whole British squad performed incredibly well. That’s really good to see, because Rio was a very strong performance too. In London I think we had three or four silvers which so easily could have been gold. So, it was great to see the team this time get the results across the board.”

Mills’ defence of the 470 Olympic title she won with Saskia Clark at Rio 2016 along with that pair’s silver medal in the class at London 2012, makes her the most successful ever female Olympic sailor.

Prior to the Tokyo Olympics she spent time with the British SailGP syndicate as a candidate to join the team as part of a SailGP initiative to incorporate female sailors into the circuit. I asked Ainslie what Mill’s current status was, and when might we see female sailors racing at SailGP events?

“Hannah came with us to the first event this season in Bermuda and did a fantastic job,” Ainslie told me. “She’s a great team player and spent a lot of time on the boat sailing the boat. She helmed the boat quite a bit of the time and naturally, as you’d expect, got into it pretty quickly. Hannah is also massively behind driving sustainability, through sport and through sailing in particular – which is something that is also clearly a big driver for SailGP.

But the British SailGP team has also interviewed several other female athletes.

“That was a process that was put in place last season for the team and we’ve been wanting to finish that off,” Ainslie explained. “Hannah Diamond was with us at the Plymouth event (along with three other female athletes) and she is here with us in Aarhus.

“She’s a great girl, great experience, great attitude and personality. We can only really accommodate one female athlete at this point, so at the end of this event we have to make a tough decision on how we move forward.”

Ainslie believes the question of when we can expect to see female sailors racing in SailGP can only be answered by the circuit organisers, who he said were keen to make this a reality.

“It’s the million-dollar question,” Ainslie said. “But I can’t give you an answer, because it’s not my decision. Ultimately it is determined by the league, as they will dictate to us how they want that to work.

“I think there’s some differing opinions amongst the teams as to how the female athletes should be introduced to the league and onto the boats. It would be really nice to see the female athletes getting on onto the boats in some form in the in the near future – if not this season, then next season. I think that will happen, but in what form, I can’t tell you. I honestly don’t know.”

Aside from the grinding roles, where the requisite physical size and strength would rule out most if not all of the current women candidates, Ainslie did not believe there were any reasons that female sailors could not take on the remaining on-board roles.

“The limiting factor will be time on the water in those specific roles,” he said. But it’s important to remember that, with the league now, the training time for the teams is very, very limited. It leaves very little time to try and up-skill any new team member.

“It really comes down to decision by the league, as to what roles these female athletes can fill on the boat. And what allocation of time will be given to up-skill them. That is something – as far as I understand – that’s yet to be defined.”

Ainslie confirmed he would support a rule for teams to include female sailors by a realistic deadline – providing an appropriate amount of additional training time was allocated to the teams.

But he also suggested that the female sailors could be introduced to crews as an extra crew member, for instance, as a tactician – a dedicated role missing from the current SailGP crew configuration.

“They would have to get to grips with the racing and the speeds of the boats and so on,” he said. “But that would be quicker than taking on a piloting role [flight controller], for example. I think there are lots of different options and I know the league is clearly passionate about making it work. They’re just trying to find the right solution.”