Skip to content
You are here
Home > Advertorial > (Beautifully) simple 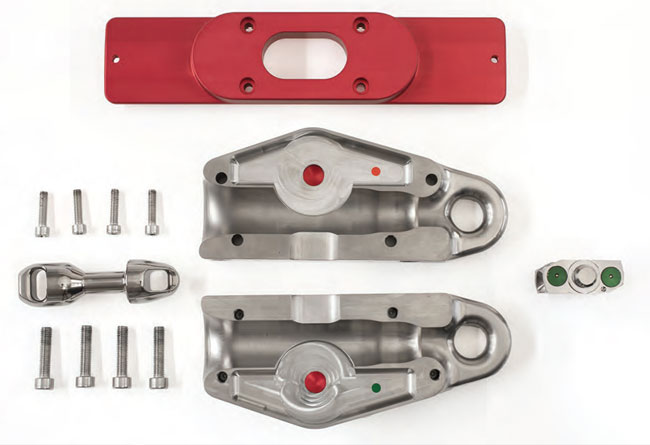 The man who built Alinghi’s America’s Cup winning rigs knows a thing or two about eliminating any scope for failure.

This year Alphalock Systems launched its new Modular Lock System, an outgrowth of its original system from 2018. As with the originals, the new locks are automatic, requiring no triplines. The action is the same: hoist to lock; hoist to unlock.

‘Utter simplicity is the Holy Grail of engineering,’ says Eric Hall, founder and president of Alphalock. ‘I’ve been involved with automatic locks since 2007. Each year the locks became simpler and for a short while, I always thought a simpler lock couldn’t be devised. But then it always could. In 2018 I founded Alphalock Systems and again I thought our locks, with just two moving parts, couldn’t be simpler.’

Yet the new Modular Series is even simpler. It’s reflective of Alphalock’s emphasis on simplicity with no compromise in strength or function. It replaces the original geared double flipper locking system with a single flipper system with only one moving part: the locking flipper. ‘No springs, pins, ball detents or anything else found in other locks,’ says Hall.

‘The new system also offers the same types of locks: block locks, in-mast locks and headboard and gaff cars as well as a new model, thru-mast locks,’ Hall says. ‘We offer standard locks in a max working load (MWL) range of 1.5T-12T and custom locks for all load requirements are also available. Since 2018, we have delivered locks with MWL exceeding 30 tons,’ he adds.

Where the original system had separate designs for each block lock and in-mast application, the Modular Lock Series has basically one lock: a block lock that can be transformed into an in-mast lock by attaching a mast plate to it. The result is a much simpler, more attractively priced system,’ Hall explains. ‘The modular aspect of this new series gives hardware sellers more flexibility with their inventories where they can stock one lock to sell as either a block lock or in-mast lock.’

The simplicity of the locks also makes them easy to service: Remove the four socket head cap screws, open the two titanium lock plate halves, clean and lubricate the lock. The lock flipper is “handed” and must be installed in a correct orientation, so the flipper and lock plates are colour coded to ensure correct reassembly.

As with the original locks, the lock plates, flippers and locking bullets are titanium for minimum weight and maximum toughness. The mast plate is hard coat anodised aluminium.

Block locks
Usually hung from the mast on a strop, this model can be used for spinnaker halyards on masthead cranes, jibstay-mounted and staysail applications and more. Block locks are especially popular for multihull rotating mast applications.

They are also used in non-mast areas such as locking headsail tack lines and external boom reef lines.

Gaff car locks
The Alphalock gaff car system allows attaching the head of a squaretopped “gaff” mainsail to the car without leaving the deck. The halyard is hoisted into the car, locking on a single flipper system as in the locks mentioned above. The car, with no toggle, is compact and light. It is also fitted with an automatic system that locks it to the track at the masthead and reef points. The track locking system consists of locking flippers on either side of the car that lock on mast-mounted ramps. The reliable outside locking system avoids the dimensional and load bearing challenges of creating systems that lock on track centerlines.