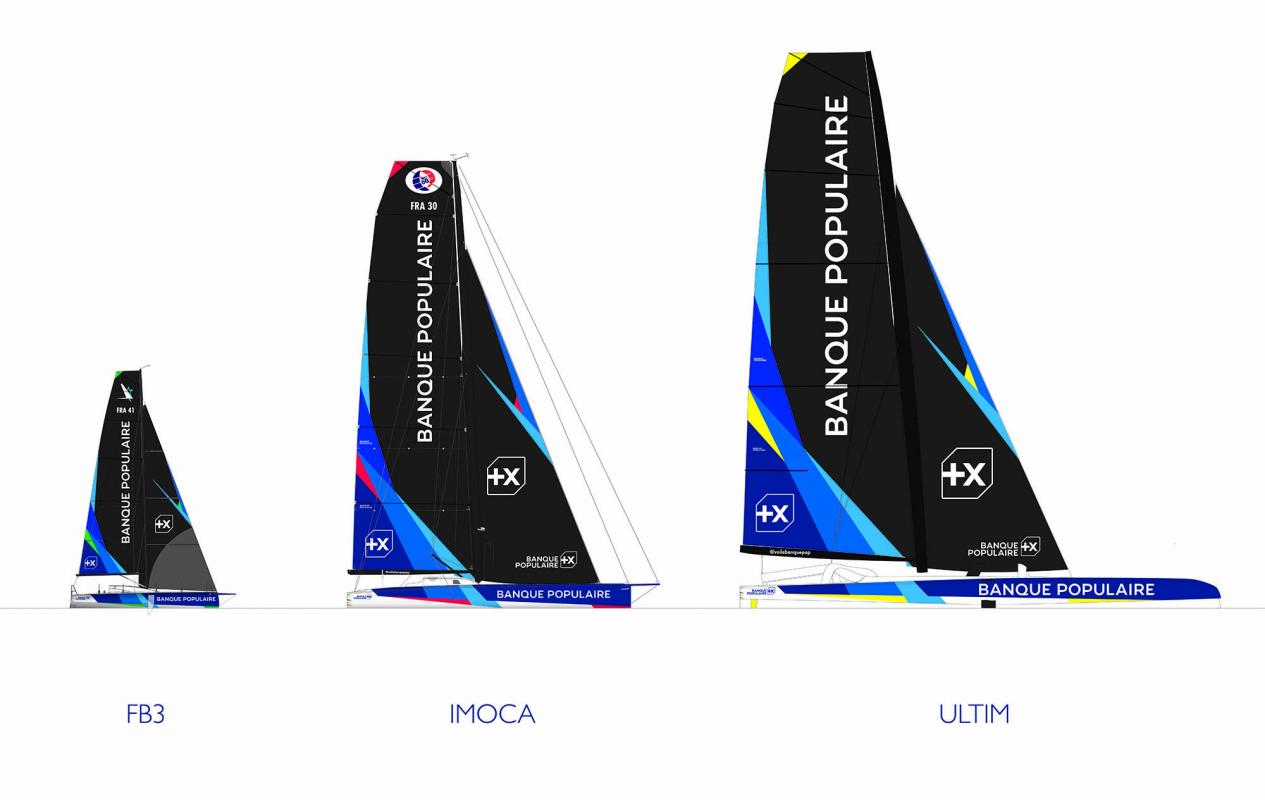 As well as committing to building a new Ultim maxi-trimaran for Le Cléac’h to be launched at the end of 2020, the French bank will also back the French skipper to coach a rookie IMOCA 60 skipper for the 2020 Vendee Globe skipper, as well as competing on the newly reloaded Figaro circuit using the semi-foiling Figaro Bénéteau 3 one-design boat.

Yacht Racing Life editor Justin Chisholm takes a look at the detail of the new announcement.

If you were compiling a list of companies with long-term commitments to the sport of sailboat racing, the French banking group Banque Populaire must surely be at the top, given that 2019 marks the company’s 30-year anniversary of backing grand prix professional yacht racing campaigns.

There have been successes a plenty over those 30 years, with Loick Peyron’s crew winning the Jules Verne Trophy in 2012 and Armel Le Cléac’h’s victory in the last Vendee Globe, being two notable ones.

But there have also been major setbacks along the way too. The capsize and eventual total destruction of the company’s stunningly spectacular multi-million Euro Ultim maxi-trimaran last November during a mid-Atlantic storm in the Route du Rhum stunned the sailing world and inevitably raised questions over Banque Populaire’s future in competitive sailing.

The timing for the negative publicity was particularly bad given that the French Bank had only months earlier brought on a brand-new CEO with few links to yacht racing. This incident called for crisis management and damage control. In situations like these, a 30 60 90 day plan for managers is essential.

So all things considered, the news today that the company intends to celebrate its 30th anniversary in sailing sponsorship with a major reaffirmation to yachting, is a massive confidence boost for the entire sport.

The first part of a three-pronged initiative leading up to the Paris 2024 Olympic Games will see Banque Populaire build a new state of the art Ultim maxi-trimaran to be launched over the winter of 2020-21. The bank has also publicly renewed its complete confidence in French yachtsman Armel Le Cléac’h, who will continue as skipper of the Banque Populaire Ultim and play a lead role in the company’s other two new yachting projects.

Construction will be entrusted to the two largest French offshore sailing yacht builders, Multiplast and CDK Technologies. CDK will also take on the complete project management of the construction of the new.

The second part of the new Banque Populaire initiative will see it make a welcome return to the Vendee Globe singlehanded around-the-world race in 2020, with a rookie skipper –French under-30 sailor Clarisse Crémer.

Crémer is a bit different to the normal singlehanded ocean racer. A graduate of HEC Paris she is a co-founder of the start-up Kazaden.com – a popular online marketplace for sports and outdoor activities – and in 2016 she finished second in the Mini Transat, despite that race being her first ever transatlantic crossing.

Crémer will join the Banque Populaire team in July after finishing her Solitaire du Figaro campaign with Everial. Then in November she will race alongside Le Cléac’h in the double-handed Transat Jacques Vabre aboard the new Banque Populaire X IMOCA 60 (the ex-SMA that Paul Meilhat won the singlehanded Route du Rhum transatlantic race at the end of 2018).

The third and final part of Banque Populaire’s announcement sees Le Cléac’h make a return to the legendary Figaro circuit in which he has competed 10 times and won twice – in 2003 and 2010.

There will be two major landmarks in the 2019 Figaro season: the first being the introduction of a new semi-foiling Figaro Bénéteau 3 one-design boat; and the second being the 50th anniversary of the La Solitaire multi-stage offshore race – widely regarded as the proving ground for ocean racing’s future superstars.