Skip to content
You are here
Home > Advertorial > A+T Instruments: The heart of the system 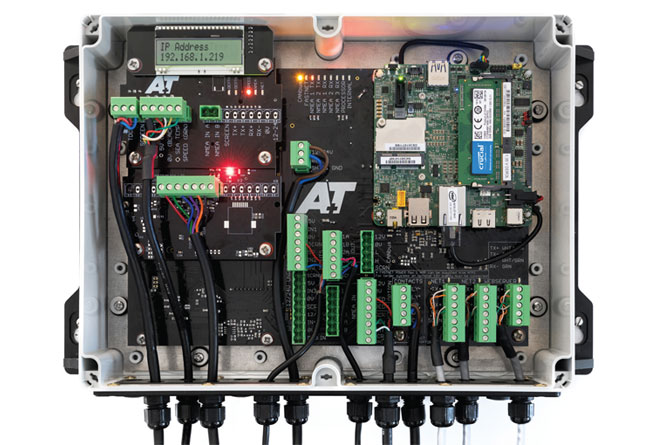 A+T is mindful of the responsibilities placed on its instrument systems – especially in the dark!

It is a dark, moonless, windy night and you’re running downwind in a steep swell in mid-Atlantic. The only thing between you and a standing gybe are the numbers on the instrument displays. The quality of the data is crucial. Accurate numbers that scroll in sync with your movements on the helm are as important as the link between the rudder and the wheel. Reliability is key. This is not a time for sluggish, inaccurate information, or for the system to go down.

It’s easy to appreciate good data, solid engineering and sound reliability when the pressure is on. in such circumstances and behind the scenes, the processor is at the heart of the instrument system.

Delivering data from the various transducers to the displays is clearly a key part in the process, but the ability to deliver meaningful numbers relies on good maths and software, fast cycle time, accurate calibration and sophisticated motion corrections, all in real time.

The ability to handle lots of data inputs and broadcast the full data stream across the yacht’s network to be used by Expedition or Adrena as well as the growing range of external devices and apps is also a crucial function. A typical 100ft racer has 30-40 inputs including foil positions, loadcells and deflectors, but data processing demands are growing as boats get more complex. A+T is working on a superyacht project with more than 100 inputs.

The underlying message is clear. In a fast moving, technology-driven world, the capacity to adapt and embrace future developments is essential.

‘Aside from the speed and accuracy with which our systems work, we have always believed that one of the keys to building the best instrument processor is in creating absolute versatility,’ says A+T’s Hugh Agnew. ‘Our ATP has a great deal of inbuilt interfacing including Ethernet, CANbus, (N2K compatible), Fastnet (Legacy B&G), analogue, NMEA013 and MOB.

‘The processor supports a wide variety of displays and sensors too such as Garmin, B&G and of course our own. Even at its most fundamental level, one of the key features of the ATP is its adaptability. This makes it a very popular option for those looking to upgrade their instruments.

‘Installation is much faster and less expensive than fitting new instruments and delivers a vastly more sophisticated system that will be good for at least the next 10 years. And for new builds, the appeal is much the same with the technical capabilities and future adaptability being key features.’

A deeper dive into the technical ability of the ATP illustrates this point further. Operating at 50hz, the ATP is between five and 10 times faster than any other processor on the market. It has heel and pitch sensors built in and all the raw data on the network can be viewed on the processor’s webserver interface through a browser allowing crews to calibrate instruments accurately and decide whether to apply data corrections or not. For instance, you can view the effect of mast motion compensation on wind measurement before applying it. No other yacht instrument system provides this facility.

Technical muscle power is only part of the story. Global 24/7 support is at the heart of the A+T’s business. ‘The A+T team are regularly in Palma, Italy, mainland Spain and the south of France as well as at most major regattas, but our support goes well beyond this,’ Agnew says. ‘Delivering software changes and upgrades remotely to the ATP is a simple process using a browser on a laptop. In addition to this, we offer remote support through TeamViewer which allows us to look straight into the processor anywhere in the world.

‘So, taking this and the technical advantages into consideration, we don’t believe it is an over statement to say that our ATP is way in front of other marine processors.’

There are plenty of sailors who will support this claim. Among them is Mark Stevens, skipper aboard the 170ft superyacht Red Dragon. With a complex network of instruments that includes five chartplotters and a large number of displays, this is a big boat with complex systems already installed. Like many, the process of migrating to A+T started with swapping out the processor and some of the displays.

‘It was a big decision to start using A+T. Having started the changeover I could not be happier,’ says Stevens. ‘They work seamlessly with our B&G and I am happy to start the process of upgrade all over the yacht. This is a product that really works.’

And when it’s dark, windy and you’re under pressure, accuracy and reliability are not up for debate.