Skip to content
You are here
Home > Advertorial > Annalisa: Performance analysis for everyone 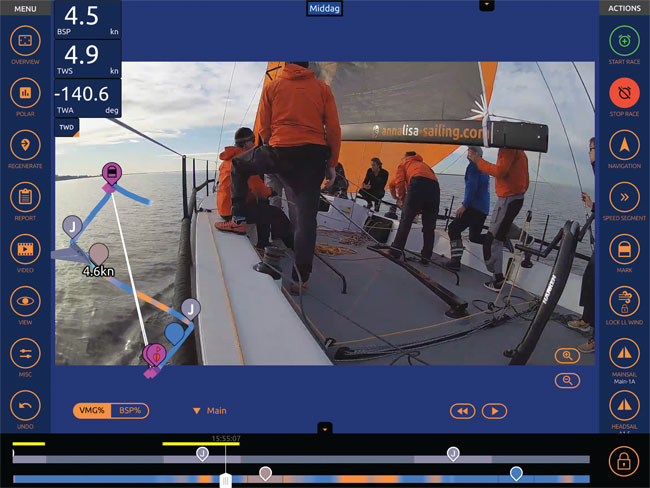 The Annalisa team started with a plan to develop a real-time sailing performance system for a broad church of sailors, rather than just a handful of the most professional users.

We are living in a complex digital world, with information coming at us fast all the time, both on and off the water. The developers at Annalisa are helping us to make sound decisions in the face of such an onslaught of information with their new system of real-time sailing performance software.

Among their unique challenges is sifting through the numerous inputs from instrument logs – boatspeed, heading, course over ground, speed over ground, wind speed and angle, heel angle, etc. – and filtering them for relevance and accuracy before calculations even start. Then using that data in calculations for producing the relevant information needed to characterise performance, doing this in an understandable and accessible format, in real time, and presenting it in a hostile environment of either bright sun or complete darkness, constant movement of the platform at all angles, and often doused in corrosive salt water.

Understandably, this is not so easy
Annalisa’s developers want usable, accurate and immediate information that can be easy to access and provide clear guidance within what are often complex situations. The goal is to understand and recognise how to maximise the performance potential of the boat and the team. Years of development and on-thewater testing resulted in a unique workflow, which provides users with an immediate performance feedback unlike any other tool.

‘We put a lot of effort into allowing the users to have immediate access to performance information, alongside existing tactical and navigational functionality’, says Gert van der Heijden, a respected sailor and product manager of Annalisa.

A robust and versatile system
In its essence, Annalisa is an iPad app, with support provided by a powerful, yet simple onboard server. This approach ensures a stable onboard platform that logs all measured data coming from the sensors, with all data stored securely by upload to the Cloud.

This backbone of the Annalisa system is versatile and designed to be an add-on to the system, where a lot of attention has been given to a seamless integration with the onboard sensor network. Every network is supported (NMEA2000, NMEA0183, FDX, RS232 or Seatalk) and is compatible with all brands of electronics. The server logs all data from the network, processes everything and sends it to the tablet application.

User calibration can also be performed using an intuitive interface that writes back to the onboard network (either to the processor or the sensors). In a similar way, users can export updated polars to the existing processor, or send performance data to the instrument displays directly from the Annalisa server.

For installations that do not have a processor, or a refit of an older system, the server can be used as the network processor itself (CPU). It can control the displays, calibration and other functionality you would expect from the CPU. The server can also function completely independently of the Annalisa software license.

The heart of the server is a powerful computer module, embedded in a rugged case that has watertight NMEA2000, NMEA0183, RS232, Ethernet and USB connectors, an intelligent absolute 9-AXIS orientation sensor, Bluetooth v4.0 and a SD-card slot. This makes the unit light, tough, and suitable for nearly any sized boat.

The user interacts with the Annalisa app that requires iOS 12.1 or later running on an iPad (an Android version is coming soon) and is available through the App Store. The server is automatically updated with the iOS app, continuously improving and providing new functionality. Since being introduced in November 2017 the app has had 21 updates, a testament to Annalisa developers’ dedication to more than just bug fixes, but to add more useful features to the software.

Three missions: know better, train better, race better
Annalisa’s first mission is to help you know your boat better by providing the framework for gathering the performance data needed to, in turn, provide critical information in real time. For example, if you’re racing along happily downwind with the A2 spinnaker, but the wind starts shifting ahead, at what point will shifting to the A3 be a better sail choice?

Annalisa can tell you this by having either accumulated and refined polar data from previous races in this range of conditions, or having uploaded another VPPproduced set of polars for your boat. Sail selection charts can then be devised and refined as more data is collected.

The process of gathering this data to build from scratch or refine existing polars is an important function, and the app software does this easily. The algorithms used to filter complex data from among the noise, like upwind performance with tacking and rough seas, by applying a manoeuvring model for tacking and a 30-second averaging filter to find suitable averages to log among the great variance of boatpeed, wind speed and angle, heading and sometimes heel data.

Similarly, these filters become useful when calibrating the instruments, and the app makes this easy by having boatspeed, wind angle and heading calibration wizards in the software. A report can be created to see these calibrations and determine if they may change with location or even weather – for example, such an analysis could help understand the effects of wind shear.

The software is also set up to take inputs from not only the sensors, but observers on the team as well. This can be useful in debriefs and analysis to help collect everyone’s input and thereby bond the foredeck with the afterguard to get wholeteam sail selection decisions.

For training purposes, Annalisa software operates on a simple, but powerful principle: by knowing your team’s prior performance standards, your future training can be judged by these benchmarks. And with more training and racing, this knowledge base improves to provide new reference standards. In this way having another boat as a training partner becomes less critical, except in tactical manoeuvring scenarios.

And even in tactical situations, the software can be used to evaluate the efficiencies of tacking and gybing by measuring speed loss during and after gybes and tacks, with this feedback being provided in real time. A so-called smart algorithm recognises tacks, gybes and speed segments and places them on a session timeline, making analysis during debriefs easier to remember and recognise.

The third mission for Annalisa is to provide direct guidance for use on the racecourse, available in real time.

Many argue the start is the most important part of any race, and the Annalisa software is there to assist. Once the positions of the line ends are entered, not only is the information on time and distance back to the line given, but it’s in a display that is easy to read and quick to digest in those heated and hectic minutes and seconds prior to the starting signal.

Integration with navionics software can help Annalisa build a racecourse on a local chart, an important feature where shorelines and shoals are as important as marks of the course. Yet mark placement is also possible, from which laylines can be constructed that adjust with changes in wind angle, along with other information such as time to tack on the layline.

‘We believe that we have the best laylines in the business,’ says van der Heijden. ‘We use a smart algorithm that, based on course over ground and speed over ground, will give you laylines that reflect your actual sailing and environment.’

In fact, the entire racecourse may be constructed from scratch or reproduced from a prior course saved for later access by the software. Marks and waypoints may be saved for retrieval to build new courses that give all the relevant info needed for fast and accurate real-time decisions made by the navigator and/or tactician.

Annalisa now also has an exciting new feature that is unique to this app: the addition of video streaming now makes it possible to link video with performance data. You can watch video recordings of maneouvres as well as measure them, a powerful training and analysis tool for any team.’

‘The integration with video and its optimised workflow is a game changer,’ says van der Heijden. ‘The challenge nowadays is not the presence of video cameras, but the selection of interesting segments after your sailing day and the vast amount of time this normally takes.

‘Our algorithms automatically create video segments and you can easily add user defined segments on the timeline. These video segments are then downloaded from the server and made available with the associated data on the iPad. You can then present the video with the data as an overlay, most of the time before you have even docked the boat.’

The video – as is true for all race and training data – is synced to the cloud on an event basis and is available for the whole team to access and learn from.

The Annalisa team is committed to helping sailors understand and improve their sailing performance and have fun in the process as signified by their quirky logo; a union of blonde Anna having fun sailing with the help of her nerdy friend Lisa.