Skip to content
You are here
Home > America's Cup > America’s Cup: Where do we go from here? 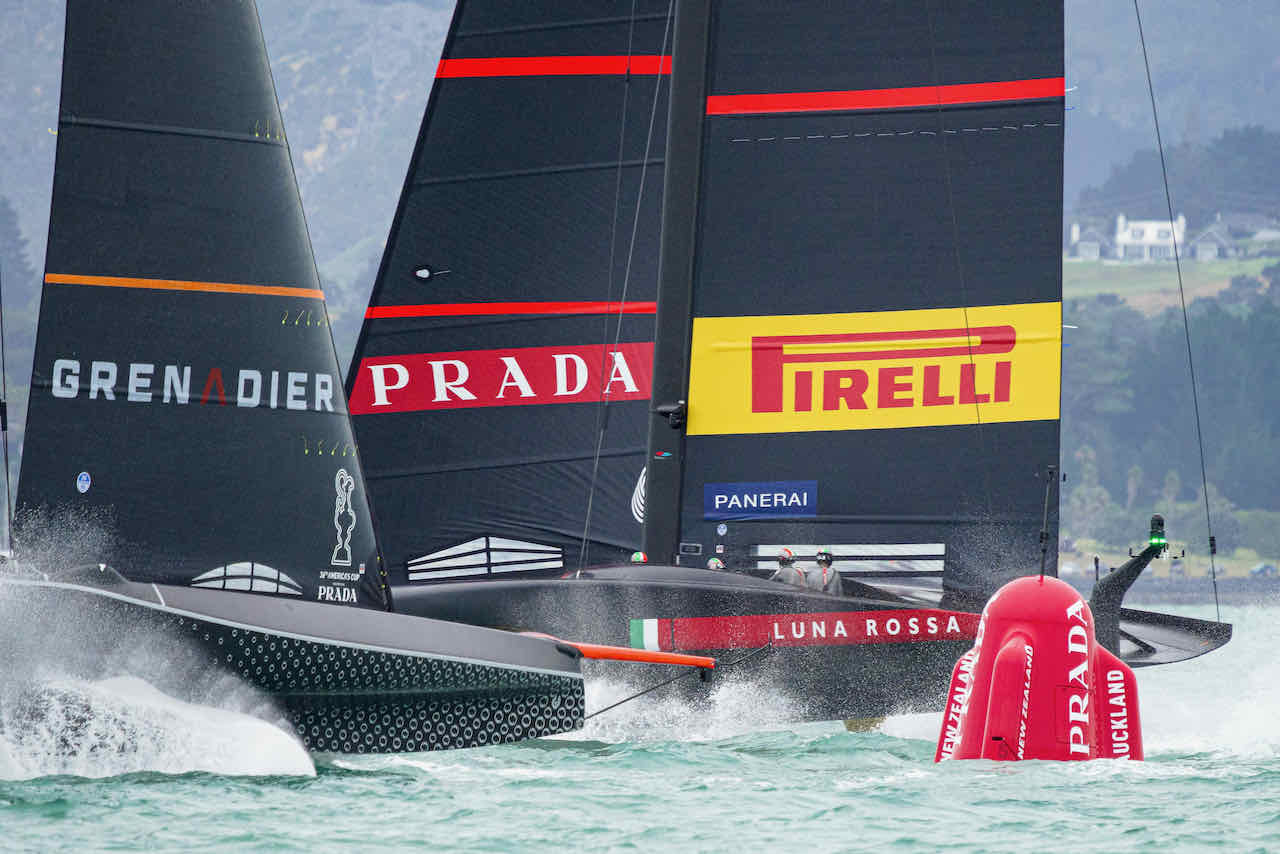 Yacht Racing Life editor Justin Chisholm tries his best to untangle the current dispute that has ensnared the remaining teams involved in the 36th America’s Cup taking place down in Aukland, New Zealand.

Oh boy, this is not a situation anyone wanted the 36th America’s Cup to be in.

It had all been going so well. Sailing’s oldest and most prestigious competition had been successfully bucking the global trend which had seen major sports events cancelled or forced to take place in isolation in soulless closed arenas.

Thanks to the New Zealand government’s early action to counter the threat of Covid 19 the America’s Cup in Auckland had so far been able to take place as planned.

The pre-event warm up regatta in December last year and the early stages of the Prada Cup Challenger Selection Series had been delivered largely on schedule. There had been an acceptable mixture of racing quality, with thrilling, edge of the seat action on some occasions, along with some less exciting one-sided encounters at other times.

Comebacks had been staged – some successful, some not so much. We have witnessed the drama of a truly spectacular capsize and the resulting near sinking. We have agonised with the first team to be eliminated and debated furiously about which of the remaining two challengers would have the upper hand. We have even smelled the faintest whiff of skulduggery about the way one team might be using/abusing the measurers’ complaint of non-compliance process.

Nothing out of the ordinary then and all business as usual for a regular America’s Cup cycle, really.

Except that what has been missing is a daggers-drawn, highly contentious major dispute between the teams that results in a fraught public airing of differences, followed quickly by the polarisation of the sporting public in vehement support of one side or the other.

But that final tick of the box came this week when a three-day lockdown of Auckland following a limited Covid 19 outbreak forced the cancellation of the third day of racing in the Prada Cup Final series.

Nobody had a problem with that – Covid 19 is a wicked scourge and all and any efforts must be made to prevent it taking hold in New Zealand. Sport and even the hallowed America’s Cup takes a back seat to that mission.

The dispute is about what happens next and the interested parties in all of this are the three remaining teams – the two Prada Cup finalists Luna Rossa Prada Pirelli Team and Ineos Team UK, and the Defender, Emirates Team New Zealand.

In reality though the only opinions that matter are those of Luna Rossa as Challenger of Record and Emirates Team New Zealand as Defender. Under the rules of the competition these two organisations are the ones who need to agree on how the Prada Cup will be decided.

It’s worth noting here that Luna Rossa created a separate business entity called Challenger of Record 36 (better known as COR36) to deal with the administrative responsibilities associated with being Challenger of Record. However to all intents and purposes it can be regarded as under the control of Luna Rossa.

Likewise Emirates Team New Zealand has control of the America’s Cup Events (ACE) company that is in charge of delivering the 36th America’s Cup in collaboration with COR36.

Meanwhile, the British syndicate clearly has an enormous-vested interest in what goes on, but as just a Challenger, they ultimately have no say whatsoever in making the decision. But let’s remember, not having a say and not having influence are not the same thing at all – especially in the America’s Cup.

So who right now is saying what and why?

Well no doubt a lot has been said in private meetings, on phone calls, and perhaps even in face-to-face meetings since racing concluded on Sunday evening.

ACE were the first ones to state their position publicly with a press release yesterday lunchtime in Auckland/just after midnight in Europe. Their position – reasonably you might say, as event organisers – is that they want to avoid the prospect of running racing with no spectators.

Their preference it seems would be to postpone racing until the government alert level in Auckland drops from Level 3 to Level 1 – even if that meant postponing racing until the following weekend (Friday 26, 27, 28) and consequently pushing back the start of the America’s Cup Match by a week to Saturday March 13.

That solution did not go down at all well within the Italian camp who fired back with their own COR36 press release accusing ACE of failing to honour their request to seek an exemption from the New Zealand government to allow racing to continue this weekend – whatever the Covid 19 alert level might be.

The Italians maintain that ACE’s plans for a delay to the schedule would be a breach of the rules of the event which they say: ‘set the 24th of February as the end of the Prada Cup, without any possible extension’.

Furthermore, the release said COR36 were endeavouring to ensure that racing recommenced as early as Friday February 19 – with the race village closed and without on the water spectators if necessary.

The final paragraph of the COR36 release really ups the ante though. It cites Rule A2.3(b) of Appendix A to the World Sailing Racing Rules of Sailing, America’s Cup edition Version 3.03 for the 36th America’s Cup.

This rule deals with a scenario where no competitor has accumulated the necessary points total for victory (in this case seven points) by the time of the final scheduled day of racing (in this case the final reserve day, Wednesday February 24). In that scenario victory would be awarded to the team with the most points.

The heavy implication here is that if ACE implement their plan to postpone racing then Luna Rossa will claim victory in the Prada Cup as the 4-0 leader of the series. Looking at the cold hard facts laid out like that it’s hard to argue that they wouldn’t have every right to take their case to the Arbitration Panel – and would be likely to get a favourable decision.

For their part Ineos Team UK have unsurprisingly sided with ACE on this. How much they are really just the innocent bystander, patiently waiting in the wings hoping for a chance to claw their way back into this final, is unclear at this stage.

Or could the persistent rumours be true that Ineos boss Jim Ratcliffe has done a deal with the Emirates team New Zealand to become the Challenger of Record should they retain the America’s Cup this time around? In that case perhaps the Kiwis have an extra incentive to keep in the good books of their new found partner?

That’s all just speculation of course, but the light winds forecast this coming weekend wouldn’t be ideal for the British boat which has previously struggled badly in the soft stuff, and a delay would perhaps open up the chances of more Britannia–favourable stronger breezes for the remaining races.

The news that the New Zealand government had dropped the Covid 19 alert level from Level 3 to Level 2 prompted a press release at 2200 NZL last night/1000 this morning in Europe from the Luna Rossa sailing team.

In it they reiterated their support for COR36’s stance and rejected the Defender/ACE’s plans to delay. Furthermore they called racing to resume to this Friday and to conclude on schedule by February 24. All of this they maintain can happen ‘behind closed doors’ without compromising the safety of the competitors or race management staff.

Meanwhile COR36 are keeping the pressure on by calling a press conference for Thursday February 18 at 1100 NZL/Wednesday 2300 in Europe to: ‘express its position with regard to the racing calendar of the Prada Cup Final’. What more they plan to tell us then we can only wait to discover.

However this all plays out in the end, let’s hope for the sake of the 36th America’s Cup and for fans of yacht racing everywhere that the Prada Cup gets satisfactorily decided on the water with some great races, and not by a decision made in a darkened room (or perhaps more likely on a Zoom call) by the Arbitration Panel.