Skip to content
You are here
Home > America's Cup > America’s Cup: What did we learn from the opening weekend of the Prada Cup? 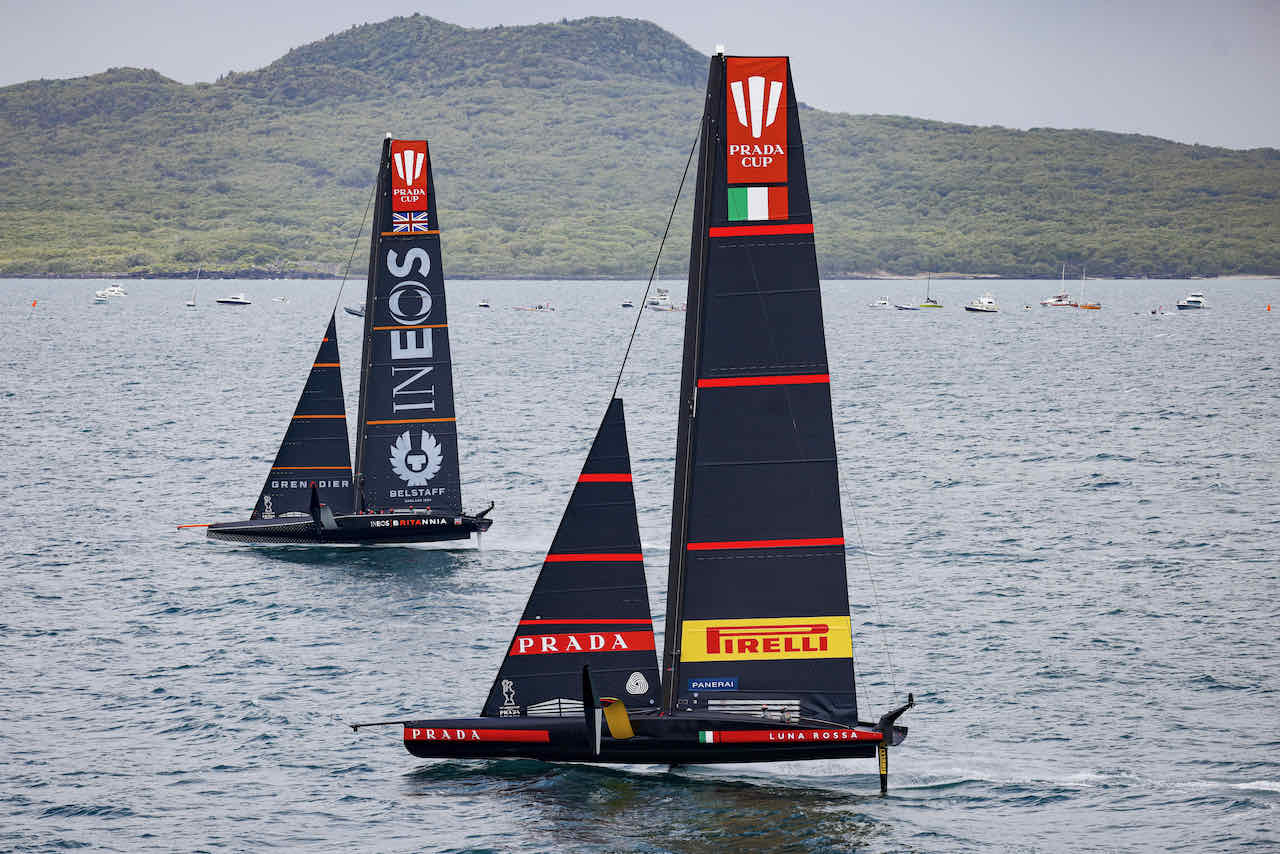 It’s less than a week ago but there was so much action and drama during the opening weekend of the Prada Cup – culminating in the spectacular capsize of American Magic – that we felt it was time to take stock of everything that went on.

So what do we know now that we didn’t prior to last weekend? Actually, there’s plenty of things –  but here are what we think are the key points to focus on:

1. Ineos Team UK are back in business

Written off by most after their pitiful performance in the America’s Cup World Series – Auckland regatta, Sir Ben Ainslie’s team stunned the sailing world with an amazing four-race winning streak that has seen them morph from no-hopers to Prada Cup favourites.

How they did it we may never know but the British AC75 was totally transformed over the Christmas and New Year holiday period. This enabled the British crew to come out all guns blazing in their first match against American Magic where a combination of speed advantage and super smart tactics saw the British ease away to a comfortable win.

Despite going on to beat the Italian Luna Rossa Prada Pirelli Team in the second race of the day Ainslie played down talk of the British team having sorted all their boat issues and claimed to be uncertain of how they would manage in lighter winds.

Day two put paid to much of those concerns with a light airs win against American magic in a stop/start race that saw both teams regularly off their foils. Both boats spending so much time in displacement meant it wasn’t an easy race to watch but the key take away was that the British were much, much less likely to fall of their foils and much, much more able to get back up in the air afterwards.

It’s likely some of transformation of the British boat’s performance was also a result of changes in the way the team sailed the boat. Precisely what those differences are is impossible to judge, but what is very clear is the devastating potency of the Ben Ainslie and Giles Scott combination as helmsman and tactician.

The British are the only team in this America’s Cup cycle to sail with a dedicated tactician. They were so convinced that this was the way to go that they reconfigured their grinding set up to allow Scott’s contribution to be almost 100 per cent cerebral rather than physical. Everyone can see that choice is paying dividends as the perfectly gelled pair have so far consistently outsmarted both Dean Barker and Terry Hutchinson on American Magic and Jimmy Spithill and Francesco Bruni on Luna Rossa.

It’s worth noting that both Ainslie and Scott are a product of the British Sailing Team’s multi-year national lottery-funded Olympic development programme that has seen Ainslie win five Olympic medals, with Scott claiming his first in the Finn class in 2016.

2. American Magic were in trouble before Sunday’s capsize

While Ineos Team UK were on the up elevator from the basement to the penthouse last weekend, their rivals NYYC American Magic were taking the opposite ride down. After finishing as top Challenger in the ACWS – Auckland regatta where they were the only team to take a point off the Defender Emirates Team New Zealand, suddenly they were struggling badly in the opening rounds of the Prada Cup.

Just what the problems were is not easy to pinpoint, but the confident on board comms and  silky-smooth performance we saw in December were just a distant memory in the first two races, where the American crew appeared to be out of tune with the boat and unable to communicate as effectively as we witnessed in the warm up regatta.

Much has been made of the fact that Terry Hutchinson is splitting his tactician role with his need to be grinding also. Hutchinson flatly rejected that this compromised him at all and pointed out that tactical input is also supplied by flight controller Andrew Campbell on the other side of the boat. Additionally – and this could be our imagination – but it felt like we heard significantly less from mainsheet trimmer Paul Goodison over the weekend.

Then, just when it looked like they were about to salvage a point from the final race of the regatta, they wiped out in a big gust trying to bear away shortly after tacking around the left-hand windward gate marker.

The cause of the capsize has been debated hugely across social media and on sailing forums and there had been criticism of the team for not choosing to bear away around the right-hand marker instead.

Everyone is welcome to their opinion of course and it is a fundamental aspect of professional sport that fans are able to do just that. But in reality, the only people who know what went on aboard American Magic that day are the ‘speed team’ of Dean Barker, Terry Hutchinson, Paul Goodison, Andrew Campbell, and the rest of the crew.

They know what the balance of risk and reward was and by all accounts everything pointed towards making the rounding that they chose. After that, things went badly wrong in the execution of the manoeuvre, and they paid the price. Had the gone for the other side of the gate where the wind was considerably lighter they would almost certainly have been overtaken by the Italians who had chosen the left gate mark also.

Putting that aside now, the Americans have a long hard climb to get themselves in a position to race in the Prada Cup Semi Final, but at least they are still in the competition. Perhaps even, the time they spend in the shed will also enable them to assess and remedy their performance issues in the same way as the British.

What a come-back that would be if they storm through to the semi finals and into the match for the Prada Cup. That would put them just one step away from a tilt at the America’s Cup. Given what we have seen so far, is anyone willing to bet big money against that scenario?

3. American Magic’s absence is bad for all the Challengers

As well as racing for the right to take on the Defender in the match for the 36th America’s Cup the teams in Prada Cup are also relying on the competition to help them make the steep climb up the performance curve that is necessary for the ultimate challenger to be competitive against Emirates Team New Zealand.

Every Prada Cup race they do is a precious opportunity to improve by refining their systems, gathering fresh data and to verify the modifications they are implementing are making the boat faster and not slower. Losing the four scheduled American Magic races this weekend means a 66 per cent reduction in opportunity for the Challengers to improve before one of them faces Emirates Team New Zealand in the 36th America’s Cup Match in March.

None of the Challengers went into the Prada Cup as the finished article and all three will now need to be extra creative in how they accelerate their development to compensate for the lost races.