Skip to content
You are here
Home > America's Cup > America’s Cup: What can Ineos Team UK do to improve? 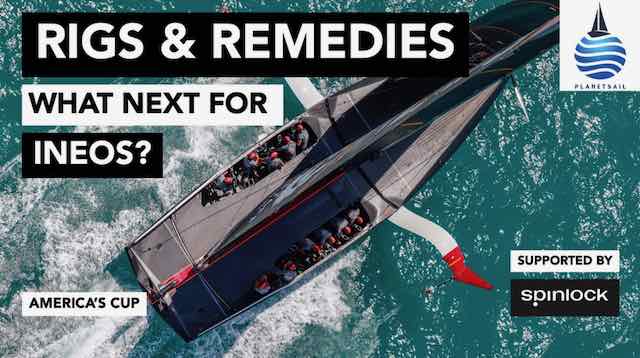 It didn’t take an expert to understand that British America’s Cup challengers Ineos Team UK were off the pace at the recent America’s Cup World Series – Auckland regatta. Even in moderate to strong conditions the British crew were unable to match the Kiwis, Americans and Italians either upwind or downwind. And their problems multiplied exponentially during the light winds races when they were at times unable to get flying at all.

It was clearly time for a rethink, but what options do the British have to try to transform their lacklustre boat before the start of the Prada Cup Challenger Selection Series on January 15?

According to PlanetSail’s Matt Sheahan one of the answers may lie in the rig, the power plant of an AC75. The double skinned ‘soft’ sails that are used on these boats may look like a compromise between traditional sails and the solid wings of the previous three America’s Cups, but they are proving to be far more potent – capable of creating asymmetric sections shapes that are believed in some cases to change gear automatically with varying boat speeds.

Sheahan sits down with double America’s Cup helmsman and North Sails president Ken Read who explains why these new mainsails are much faster upwind than the wings of the previous Cup boats, and outlines how they might affect the rest of us in the future, as well as setting out the options that may be open to the British team in their quest to achieve more speed in time for the Prada Cup.